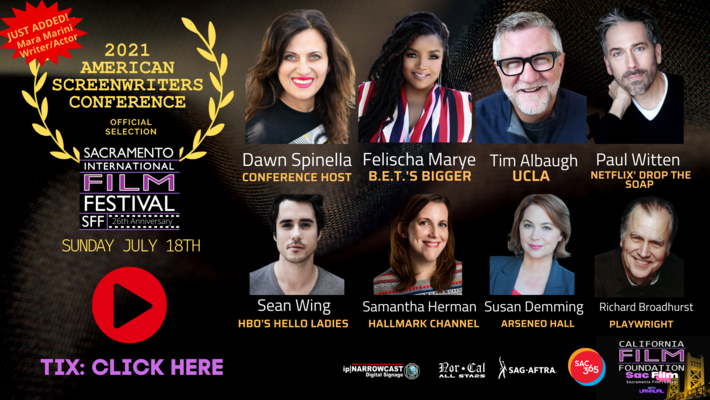 Originated in 2004 and held at the beautiful Delta King, a genuine 1860's riverboat and floating hotel located in historic Old Sacramento, the ASC was founded by the God Father of American screenwriting, Dr. Lew Hunter, Dean Emeritus of UCLA. Due to COVID, this year's event is a fantastic, ALL DIGITAL EXPERIENCE! Read on:

With our SPECIAL WRITERS PASS (just $95)  you get a day-long summit learning screenwriting in an intimate online setting  PLUS The SACRAMENTO FILM AWARDS and the ENTIRE SAC FILM FEST!

ALSO: Become a member HERE and then RSVP on this page for updates and reminders!

FELISCHA MARYE - is an American television writer and producer. Marye is best known for being the creator and writer of the show Bigger, which debuted on BET+ during the 2018-2019 fall lineup. In 2017, Marye became a writer on the hit Netflix series 13 Reasons Why.

TIM ALBAUGH -  is a writer/producer who has taught screenwriting at UCLA, UC Irvine, Hollins University, Pixar Animation Studios, and Walt Disney Feature Animation. His students have include creators of the recent film ALL EYEZ ON ME, THE MACHINIST, BLACKISH, INSECURE, STAR TREK: DISCOVERY, HAWAII FIVE-O, IZOMBIE, THE ROOKIE, and many others. Tim is currently serving as Executive Producer on Royal Viking Entertainment’s (BLACK AND BLUE, WORTH) upcoming feature comedy THE STARTUP. This is a co-production with eOne (GREEN BOOK) and Sidney Kimmel Entertainment (CRAZY RICH ASIANS).

PAUL WITTEN - Screenwriter, Showrunner, actor, Paul is  known for Behind The Candelabra with Michael Douglas and The Morning Show with Jennifer Aniston. In 2019 he co-wrote and starred in the Award-winning A Play and recently created, wrote, and produced a 13 part show for Netfilx called Dropping The Soap starring Jane Lynch. In July, Paul will feature in the New Robert De Niro film, The Comeback Trail.

SEAN WING - is an actor, musician, screenwriter who first appeared on an episode of the CBS series Touched by an Angel. He may be best known for his roles as Chris Pritchett in the ABC Family series Beautiful People and Chad Griffin in the ABC series The Whole Truth. Sean appeared the BBC/HBO production Hello Ladies with Stephen Merchant and co-wrote the 2020 Award winner, A Play with Paul Witten.

SAMANTHA HERMAN - Multi hyphenate Samantha Herman is an entertainment industry attorney and published romance novelist who has also written six films for the Hallmark channel, including Mingle all the Way and Sense, Sensibility & Snowmen. She has several films in development. Samantha speaks to the business and the art of cinema.

RICHARD BROADHURST - award-winning playwright/screenwriter.  Richard has worked with Larry Moss, Noah Wyle, Jason Alexander, Edward Asner and many others. He has also acted in many productions including  One Life to Live.

SUSAN DEMMING - Casting Director. Susan Deming, CCDA, has served as Casting Director for The Arsenio Hall Show on CBS. Her broad-ranged roster of projects includes major commercial campaigns for Apple, Microsoft, plus multiple comedy sketches for Disney Channel, Bill Nye Saves the World on Netflix, Carpool Karaoke the Series on Apple Music and World of Warcraft on YouTube. She served on the feature films, Hall Pass and The Three Stooges, and the Comedy Central series, Jon Benjamin Has a Van.

DAWN SPINELLA (host) -  winner of the Alfred P. Sloan Screenwriting Award, Dawn is an MFA in film from UCLA. She penned the biographic of autistic cyclist Freddie Hoffman and has consulted on various projects for Minerva Productions (The Kids Are All Right). She is currently directing a film through a Women In Film grant entitled, SMASHED.

of 2 Next
This reply was deleted.