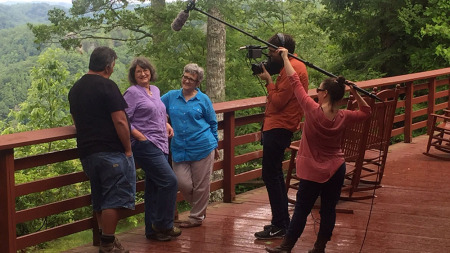 As J.D. Vance’s memoir “Hillbilly Elegy” surged to the top of the New York Times Best Seller list, I was on location in Kentucky filming “Hillbilly” — a documentary that examines the long history of vicious cultural stereotyping that has plagued Appalachia.

My first memory of seeing Appalachia depicted to the nation was the 1989 CBS special, “48 Hours: Another America.” As a 9-year-old, I watched Dan Rather tell the world about the people of Muddy Gut, in Floyd County, one county over from where my family and I lived. Everything about that program — from the images of the broken-down cars to the condescending tone of the faceless narrator — made me feel shame. The program even added banjo to the “48 Hours” theme, a familiar cue for the viewer signaling they are entering a place that exists outside of place and time. That news program had a profound impact on me and was the impetus for making “Hillbilly” more than 25 years later.

I grew up in a small coal mining community in eastern Kentucky where my family lived for six generations. I was always told I had to leave and go away to college. As a student at the University of Kentucky, I experienced culture shock and my own personal awakening. I discovered documentaries, feminism, critical race theory, and bell hooks. I worked at the college newspaper where my professors and fellow student journalists ridiculed my accent. These interactions made me feel insulted, like I had emerged from some strange and peculiar place; an outsider in my own state.

Filming for our documentary “Hillbilly” began more than two years before anyone had heard about Vance or could fathom that America was about to elect a reality television star as President of the United States. When “Hillbilly Elegy” came out it climbed to the top of the New York Times Best Seller list and stayed there for 73 weeks. I initially avoided reading it, fearing it would be filled with the stereotypes my documentary was actively working to defy. After it sat on my coffee table for months, I decided to read it in flight as my crew and I flew back and forth from Los Angeles to Kentucky.

I certainly understand the criticism of “Hillbilly Elegy.” While I related to some of the memoir aspects of Vance’s story, I didn’t appreciate the gross generalizations about working class people. Likewise, the assumption that his Horatio Alger story (rising from poverty to attend an Ivy League school, working as a venture capitalist, writing a best-selling memoir, auctioning the script to Ron Howard to direct and Netflix to finance) is available to all Appalachian people is deeply problematic. Vance’s story is powerful and his dealings with his family’s addiction are relatable to many, but his outcome is unique to him alone and can’t possibly reflect the experiences of the more than 25 million people who call Appalachia home.

Many colleagues I admire — Crystal Good, Silas House, Elizabeth Catte, Meredith McCarroll and Tony Harkins — responded critically as well. “Using the template of his harrowing childhood, Vance remakes Appalachia in his own image as a place of alarming social decline, smoldering and misplaced resentment, and poor life choices,” writes Catte in “What You Are Getting Wrong About Appalachia.” For a different perspective, consider hook’s “Belonging: A Culture of Place” and McCarroll and Harkins’ “Appalachia Reckoning,” an edited volume made in response to “Hillbilly Elegy.”

As the major political party nominations were clinched in the summer of 2016, rural people were once again on the national news. This time journalists depicted them as the unsophisticated and uneducated voting block likely to support a Trump presidency. With this political climate as our backdrop, our crew traveled to Letcher County, Kentucky, to film with a group of Kentucky filmmakers who were making a film about the Black Lives Matter movement in Whitesburg, Kentucky at Appalshop, a media arts organization founded as part of the War on Poverty initiatives in 1969.

When we set out to make “Hillbilly,” we did so with the intention of making a film that would explore why these stereotypes have persisted since the 1870s and show what impact they have on the people who live there. We strove to bring visibility to the issues facing Appalachian communities such as racial justice, economic inequality, and the long lasting impacts of exploitation of the land and people by coal corporations and other outside interests. Our goal was to do no harm; create an inclusive, gorgeous cinematic portrait; include Appalachian people in the process of making the film; and make the film accessible to rural and urban audiences. Ultimately, we wanted to present a more diverse, complex, and nuanced portrait of the region and the people who live there. We envisioned our film as an impetus for change on a broader, national scale.

It was the honor of a lifetime to make this film, involving my family in the process, and gaining the financial backing of the National Endowment for the Humanities. We got to work with the indefatigable Silas House; my hero and fellow Kentuckian bell hooks; Poet Crystal Good; and the always brilliant Frank X Walker, who coined the word “Affrilachia,” signifying the importance of the African-American presence in Appalachia. The film has played to audiences around the world, ranging from my hometown in Kentucky; to Anchorage, Alaska; and Prague and Albania. Over and over we hear people say “Hillbilly” changes the way they think about Appalachia and the people who live there. We won the Best Documentary Award at the 2018 Los Angeles Film Festival after premiering at the Nashville Film Festival and Traverse City Film Festival, where Michael Moore awarded us the Founders’ Award for Best Documentary.

Our movie is far from perfect. It is a glimpse into a broad range of intersectional issues, ideas, coalitions, movements, and conversations, that are all equally deserving of attention in the media space. I will forever regret its inability to interrogate racism on a deeper level and to examine the consequences of capitalism on communities like the one where I grew up in eastern Kentucky. I recognize how whiteness informed our perspective and how we could have been more inclusive in our effort to involve Black and indigenous collaborators.

Ron Howard hosted a work-in-progress friends and family screening of “Hillbilly Elegy” in Los Angeles and invited my “Hillbilly” co-director, Sally Rubin, and I to attend. We were delighted to receive the invitation and to learn from one of the assistants that Howard and his team watched our documentary before they began filming. I wanted to meet him after the feedback session but had to rush home to my newborn baby.

I saw the finished film on Netflix the day it premiered, and enjoyed it more than I expected. Howard’s version tells Vance’s story about growing up in a family consumed by his mother’s opioid addiction. The film is less objectionable than the book and Howard is smart to avoid an examination of the greater culture, which became the focal point of much of the memoir’s criticism.

The film evokes a strong sense of place, which I relate to as someone who grew up in a mountain holler (slang for hollow). “Hillbilly Elegy” has redeeming qualities, including Vance’s love for his mother and the way families stick together no matter what. “Cause family is the only thing that means a goddamn,” says Vance’s grandmother (played by a nearly unrecognizable Glenn Close) during a beautifully directed funeral procession through the Appalachian Mountains. Amy Adams delivers a compelling and convincing performance as Bev, Vance’s mother who is addicted to prescription pills and later heroin. The naturalness of the dialogue and accents surprised me. While I rolled my eyes a time or two over Close’s overt performance or during a scene where we see an unnecessary cutaway of Vance’s neighbors shouting at each other on the porch, I leave the film appreciating the way it represents the traumatic and painful cycle of addiction.

Crystal Good — a poet, journalist, and sixth generation West Virginian — describes the sentiment so many Appalachian people feel toward “Hillbilly Elegy” in a forthcoming piece for Scalawag Magazine. “It’s fun to be in the anti-JD club,” she writes. “It’s like smoking. You can always find a friend in white Appalachia circles, especially if you are willing to share your Blackness as to contrast the whiteness of ‘Hillbilly Elegy.’”

This moment reflects a turning point and demonstrates the unique and urgent opportunity that exists for Hollywood to — at long last — be more representative and inclusive in its telling of stories about Appalachia and the people who live there. Beyond that, the opportunities are immense for expanding media, digital, and political literacy.

Media informs the way we see ourselves and the way we understand the world in which we live. It helps us understand the experiences of others and can convey the complexity of the human condition. It teaches us to understand points of view different from our own. It is critical and necessary for our industry to invest in creating more nuanced and inclusive portraits of Appalachia in the same way it is taking steps to be more inclusive in its telling of stories about other marginalized and vulnerable communities. I fully believe when people see complex multi-dimensional portraits of themselves on screen, the world becomes a better place.

Ashley York is a producer, filmmaker, journalist, and adjunct associate professor in the USC School of Cinematic Arts. “Hillbilly” is available on Hulu.

Article by: Ashley York for Variety.