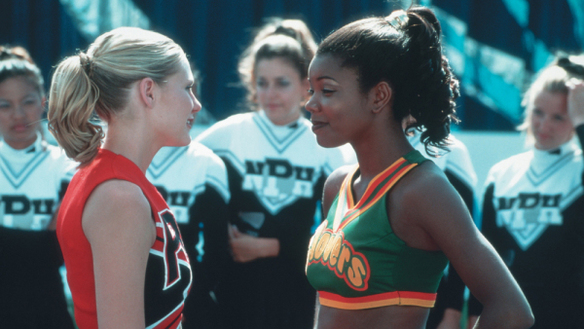 Twenty years after “Bring It On” debuted, “Brr it’s cold in here” and “This is not a democracy, it’s a cheerocracy” have shown no signs of being shunted aside from the cultural lexicon.

But in the late ’90s when screenwriter Jessica Bendinger shopped her lengthy 120-page script around Hollywood, every major studio passed on making a teen movie about cheerleaders. She was about to give up hope that the Rancho Carne Toros and the East Compton Clovers would get their due on the big screen when producers at Beacon Pictures fell in love with the screenplay and agreed to make the movie.

Despite the initial reluctance of many executives, “Bring It On” became a hit when it was released in theaters on Aug. 25, 2000 — eventually grossing $90 million at the box office. The legacy of “Bring It On” extended far beyond that original movie, later spawning five direct-to-DVD sequels and a Broadway musical that boasted songs from “Hamilton” creator Lin-Manuel Miranda.

The film, now considered a cult classic, also solidified Kirsten Dunst as a box office draw — she’d had a big year in 1999 with “The Virgin Suicides,” “Drop Dead Gorgeous” and “Dick.” In “Bring It On,” she played Toros captain Torrence Shipman alongside up-and-comers Eliza Dushku as the edgy cheerleader Missy Pantone and Gabrielle Union as Clovers’ fearless leader, Isis.

“Bring It On” follows two rival high school cheer squads as they prepared to compete for the national title. But the coming-of-age story is more than just impressive stunts and spirit fingers. The film’s central conflict — Torrence and the Toros find out their team’s five-time winning routines were stolen from Black cheerleaders — weaves in a timely and timeless social message about cultural appropriation and white privilege.

In honor of its 20th anniversary, Bendinger and director Peyton Reed reunited to reminisce about making the movie and tease plans for a sequel with the original cast.

This movie was shopped around a lot before it was given the greenlight. Why do you think it was finally made?

Jessica Bendinger: It’s one of those crazy Hollywood stories. Universal passed in the room. It was a male studio executive, who I remember was throwing a basketball up in the air while he was talking to us. He was like, “Let me stop you. It’s going to be a pass.” He was trying to be a good guy and not have us waste our time and energy. Then I went to Beacon [Pictures] and I was like, “You guys aren’t going to want this. Nobody wants this, so I’ll say it for you.” I was really at the end of my rope, and sure enough [executives] John Ketcham, Caitlin Scanlon and Max Wong really rallied to buy it. Miracles happen.

Peyton Reed: It’s amazing because even before I came in on the movie, Jessica — you and Caitlin and Max were such a unified front about, “We are getting this movie made.” There was just this energy behind the movie that was not to be ignored.

It’s a fun teen rom-com, but it also takes on serious themes about cultural appropriation and white privilege. Did that get any pushback?

Bendinger: I think the medicine was in the candy. The only pushback I remember somebody saying was, “[The Toros] are not going to win in the end. Do you think that’s a problem?” And I was like, “Rocky didn’t win. No, I don’t think it’s a problem.”

Reed: It’s only been 20 years, but it seems like another time — a time when major studios were making $10 million or $11 million movies. But even then, you know, they had much bigger fish to fry. We shot down in San Diego and we were really on our own in a great way. For me, as a first-time feature director at that time, it was really liberating. We just had all this youthful enthusiasm on the movie, and we just dove in and kept going and never looked back.

You bring up a good point. Studios aren’t making low-budget movies. Do you think a movie like this would be made at a major studio now?

Reed: It’s increasingly hard, which is a shame. It was the perfect budget for that movie. If it came along now, it would probably be a streaming movie. To be doing a competitive cheerleading comedy for major studio, all this time later, that really feels like a coup to me. It feels like another era.

Bendinger: It was very gratifying to see the success of “Cheer” on Netflix. The audience is still there, they’re still hungry. We really tapped into something that hasn’t diminished in the culture. To have people who feel “othered” or marginalized getting to win and have their moment centerstage is very powerful.

The movie is insanely quotable. Do you have any favorite lines?

Bendinger: One of my favorite scenes is actually non-dialogue, which is the brushing teeth scene. We were saying, I think it would be great if Kirsten and Jesse [Bradford] had a moment. It’s such a beautiful scene. The actors are so cute, they’re just so darn cute. It’s really irresistible. There are lots of memorable lines, but that performance, there’s something about it that I really love. But if you put a gun to my head, my favorite lines are “Missy’s the poo” or the opening scene cheer.

Gabrielle Union has talked about the perception of her character, and noted that some people interpreted her as playing the villain or an “out-of-control, young Black woman.” How did you perceive that?

Bendinger: Wow, that was never — I mean, there were earlier versions of the script where they were more oppositional with each other, but I thought one of the beautiful things about the movie is there’s no real villain. The villain is your own behavior. The villain is your own ethical moral compass. Like, how are you going to behave in a situation? Are you going to choose well or chose poorly? I think Gabrielle’s character is so poised.

Reed: Jessica is right. There’s no villain in the movie. The real thing is about Kirsten’s character and having someone realize that they’ve been boasting about being the five-time national champions and they stole those routines, right? It’s really about cultural theft. Kirsten’s character realizes the Toros are direct beneficiaries of this cultural theft. That’s the stuff that is really relevant about it. Gabrielle’s character, Isis, is a determined leader who is going to get to Nationals and prove to everybody that they’re the rightful ones. They have been fighting in obscurity to be the best, and they are the best, and now they’re going to prove it to the world. In no way is she a villain or even an antagonist. That’s a very weird read on the movie.

Right, I think it’s very evident in the movie how much Kirsten’s character respects Gabrielle’s.

Reed: I think there are always gonna be people in the audience, as there are in our country, who aren’t comfortable that the white girls didn’t win. That’s the sad truth of our country, and I think that was a fun thing to confront in the movie because absolutely, the Clovers deserve to win. They won by being the best and working hard. What I like about that ending, as Jessica mentioned, it’s almost like a Rocky ending where the protagonist comes in second, but it feels like first. She learned something, she finally realized how complicit she is in this weird institutionalized racism that’s going on. That’s two victories in my book.

Why did you want to approach the topic of cultural appropriation through the lens of a teen cheerleading movie?

Bendinger: Taking an arena as iconic as cheerleading and all it represent — All-American, idealistic, enthusiastic — was the perfect framework for a bit of subversion. I’m always hoping to execute that unexpected twist — using universal emotional real estate to fuel wonderful misdirection. If something is already subversive, it’s no fun subverting that, right? You want there to be some tension and distance so the character can grow.

In this context, Torrance and cheerleading was the perfect proxy. Pairing coming-of-age with coming-of-awareness is a natural fit. Especially for a teenager in the pre-smart phone/ pre-social media/ pre-WiFi 90’s-aughts who has never had to question her reality and suddenly has to question everything.

Cheerleading was the learning curve that is relatable. She is well-intended and gets a chance to learn and course-correct her mistakes and to grow. It is subverting the classic sports structure in many ways because it is not about us vs. them or winning vs. losing. It’s about both.

After the success of “Bring It On,” there were so many direct-to-DVD sequels that neither of you were part of. Why weren’t you involved with them?

Reed: I can speak for me, but not long after that, I found the script for “Down With Love,” which is my second movie. The way that I’ve traditionally worked is I will gravitate to something new and then get really myopic about it and get sucked into it. And by that time, I think DVD sales were at their height. Our movie did well in theaters, but it really took off with DVD sales.

Bendinger: It did really well on DVD. Like, it was insane.

Reed: I think at some point there was a business model at Universal, they did it with “Bring It On” and “American Pie,” where they were going to do these straight-to-DVD things. In hindsight, I certainly think there would have been a market for theatrical versions of the sequels. But I don’t ever remember specific talks about getting the cast back together for one.

Bendinger: Peyton and I, over the years, have had fun chats. We’re really excited at the idea of possibly pursuing this. We don’t have anything explicitly to announce, but we have talked about this intermittently for years.

Reed: We have some very, very fun and specific ideas that we’re working on. So we like the idea that “Bring It On” could potentially be this generational thing because the appetite for cheerleading and that whole world has only grown since we made that movie 20 years ago.

Can you tease what that would look like or where you envision the characters now? Are they like Monica, the coach from “Cheer”?

Bendinger: I don’t know. We’re excited to think about it.

Reed: Someone told me last year in the context of a Marvel conversation about the Marvel Cinematic Universe, someone said, “You guys should really make a ‘Bring It On’ Cinematic Universe.” We started talking about it and were like, “Wait a second,” and started devising certain things that got us really really excited. And I think that’s all we can say about it right now.

Bendinger: I will say, we really love the Sparky Polastri character.

Twenty years later, what do you hope that people still take away from watching “Bring It On”?

Bendinger: The power of respect. Torrence says, “I am only cheerleading.” But her whole career was built on stealing somebody else’s work. It’s a nice benign lens to think about the bigger problem we’re facing in America. It’s a nice starter pack for people who want to talk about it or think about it.

Reed: I agree, I think it is this mutual respect. In a utopian world, Kirsten’s character Torrence realizes the reality of what’s been going on and how they become the five-time national champions, and she wants to try and make it right. She makes some missteps along the way, but the intention is good. That was the story we were going for at the time, and I do think that resonates even now.