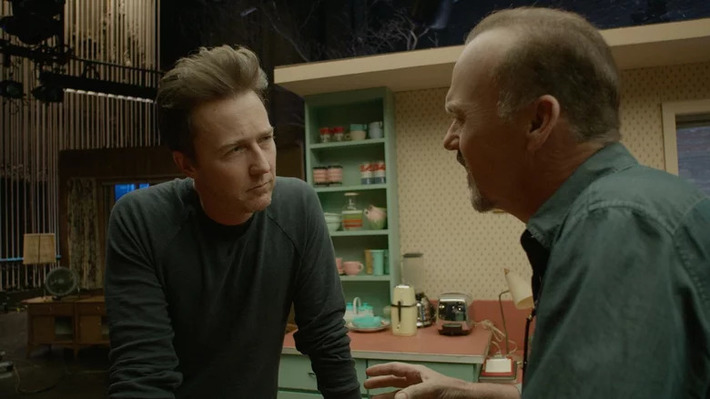 The late, great Jean-Luc Godard wrote in his 1960 film "Le Petit Soldat" that photography was truth, and that cinema is truth at 24 frames per second. Every edit is a lie.

Editing is one of those alterations from truth that modern cinema audiences have long ago internalized and accepted as part of the medium's vernacular. We accept that a conversation between two on-screen characters will instantly shift from one person's point of view to the other. Shot, reverse shot. In terms of consumption, this provides a natural form of clarity and lends to cinema a certain kind of unconscious rhythm. In actuality, the shot-reverse-shot will, at the very least, require two cameras running simultaneously, one on each actor. More likely, a single camera will be used, and the actors will run through the scene several times, the camera filming both angles separately. Editors — the eldritch wizards of the film world — will then assemble a scene out of a series of disconnected moments, constructing an ersatz chronology that resembles actual time.

Given how easy it is to condense time in cinema, it's very rare that a film will attempt to tell a story in real time. The list of "real time, one-take" movies is very short: Alfred Hitchcock's 1948 film "Rope" famously hid its edits to look like a real-time movie. Mike Figgis made a one-take film called "Time Code" which feature four screens playing simultaneously. Alexander Sokurov's 2002 film "Russian Ark" is an impressive example of digital single-take photography. Gaspar Noé's "Irreversible" and "Enter the Void" each affected a single take approach.

The moxie of Birdman

There are many other examples beyond those listed above, especially as digital cameras allowed for seemingly endless takes to be filmed without the worry of running out of physical film. In recent years, many filmmakers have experimented with the format, making both intense theatrical dramas and high-octane actioners with no visible edits. Perhaps most famously, Sam Mendes' "1917" (2019) and Alejandro González Iñárritu's "Birdman or (The Unexpected Virtue of Ignorance)" (2014) were "one-take" films that received a lot of attention from the Academy Awards. The former was nominated for Best Picture, and the latter won.

"Birdman" is an interesting film to say the least. Michael Keaton plays an actor named Riggan who is trying to live down his association with a famous superhero movie franchise from 20 years earlier. He resents that actors — no matter how dignified and respectable — are all being recruited into a cinematic superhero machine. To retain his dignity, and to remind himself of the depths of his craft, Riggan aims to headline a Broadway play. While preparing for the play, Iñárritu's cinematographer, Emmanuel Lubezki, films — in what looks like one take — multiple "real time" conversations about the nature of acting. It was pretty ballsy for the Academy to give Best Picture to a movie that states categorically that theater is superior to cinema, and that superhero movies are a blight on the industry.

In "Birdman," Edward Norton plays Mike, Riggan's blustering, overconfident co-star whose demeanor seems like a deliberate caricature of ... Edward Norton. Norton, in a 2014 interview with Interview Magazine, found himself waxing philosophical about Iñárritu's one-take approach and how it allowed for a certain kind of cinematic ecstasy.

Edward Norton and the long take

Edward Norton didn't refer to an edit as a lie like Godard, but he did — upon some reflection — see them as a miniature intermission. It's a release. Unlike in live theater, cinema can deliberately cause a scene to cease. An edit can, at least as Norton discussed it, let the audience off the hook. Indeed, after a moment, he began to have some harsh words for editing at all. Manipulating images forces artists, as well as audiences, toward complacency. An edit rips the moment away. "Birdman," in at least looking like it had no edits, left the tension in tact. In Norton's words:

"What Alejandro did in 'Birdman' is a different kind of risk; to deny you something that you don't even know you're addicted to, which is the mental break of the cut ... It made me wonder why don't we do this more often. The elegance of staying with a moment, without needing to stop and change all the lighting, made [the alternative] seem lazy and indulgent."
Norton does have a point. Not that edits are lazy and indulgent, but that the "staying in the moment" feeling is indeed rare in cinema. Norton must have felt comfortable in the format, as his performance was good enough to attract an Academy Award nomination. To date, Norton has directed two feature films: the comedy "Keeping the Faith" in 2000, and "Motherless Brooklyn" in 2019. Neither was filmed in a single take.

Lubezki, incidentally, didn't want to make a film with long takes. It's hard to frame up a nice shot if it's going to be on the move for 119 minutes. Iñárritu talked him into it. Lubezki won an Oscar.