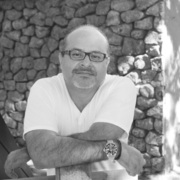 Gerry Cardoso is a Mexican-born film producer and commercial production director. With over 20 years as a broadcast production director for the top Hispanic radio networks, Gerry has produced award-winning commercials for general market agencies. Gerry has built a great reputation within the music and movie industry. Gerry is co-producing El Americano: The Movie (2014) with Edward James Olmos (Olmos Productions) and Phil Roman (Phil Roman Entertainment).