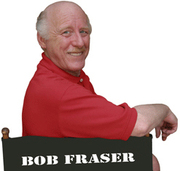 "Honored and thrilled to be here today and have my screenplay "The McLean Gang" accepted."
More…
Loading ...

A fully funded series to be sold via the web

In the long history of network television, only a a handful of people have been 'multi-hyphenates' – writing, directing, producing and playing a role in the same series. Bob has done it twice. First with the hit television series, Benson, where he was the writer/director/show-runner and played Benson’s political nemesis, Senator Leonard Tyler, for 6 seasons. Then again in a show he created and starred in, for NBC – Marblehead Manor – co-starring Michael Richards. Starting as an actor more than 5 decades ago, Bob has scores of credits in theatre, film and television – including the role of Snoopy in the original Off-Broadway hit, You’re A Good Man, Charlie Brown – as Michael in the New York premiere of Lady Chatterly’s Lover – and as Big Jack in The March March. He has also starred in stock and touring prodcutions of such plays as: Mark Twain Tonight, Will Rogers U.S.A., Stop The World I Want To Get Off, Last Of The Red Hot Lovers, The Man Who Came To Dinner, Never Too Late, West Side Story, The Wizard Of Oz, Owl And The Pussycat, Boys in The Band, Plaza Suite, and more than 90 other productions. Bob is also a skilled improvisational actor and was one of the founders of The 4th Wall in NYC, He was also an early member of the world-famous The Groundlings in Los Angeles. His show biz career has also included stints as a magician, television host, disk jockey, commercial writer/director/producer Along the way, Bob spent almost two decades as a writer and producer (or ‘show-runner’) on many classic TV series including, The Love Boat, Benson, Full House, Harry & The Hendersons and some shorter runs on series such as Condo, Hard Knocks, Wipeout, Phyl & Mikhy, The Dictator, Mr. & Mrs. & Mr., Hamburger Tech, The Library, One On One, A Separate Nation – and many more. As a director, he has guided Oscar, Emmy and Tony winning actors in both theatre and television – and has hired 100’s of actors in his role as a TV and theatrical producer. With his wife, Bev Wiest, Bob has also owned and operated 5 legitimate theatres. Bob's also written extensively for the theatre – with over two dozen produced plays including, The City Slicker, After All These Years, Frozen Stiff, Oil Can Harry's Revenge, Ragtime Joe, Zip Monicker - Space Cadet, Picture Cards, The Riverboat Gambler, The Road To Transylvania, Ragtime Joe, Say Hello To Daddy, Your Place or Mine – and others. His collection of acting career courses on your computer – You Must Act! – Nail It! – Headshot Secrets Revealed and The Agent Code have been utilized by 1000’s of actors, performers and models – in dozens of countries – all over the world. Bob is a member of Actors Equity Association, Screen Actors Guild, American Federation of Television and Radio Actors, Writers Guild of America (w), Directors Guild of America, Producers Guild, Academy of Television Arts and Sciences, National Thespian Society, National Forensics League and Rotary International (retired.)