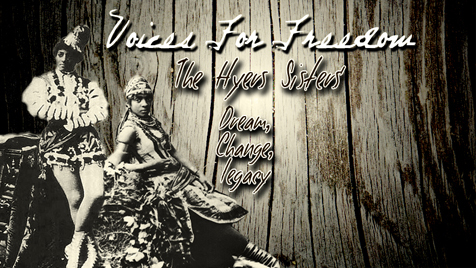 Nearly forgotten, the Hyers Sisters, Anna and Emma, were African American opera singers in the 19th-century who toured the US from the 1871 to 1894. The sisters, who lived in Sacramento, left promising opera careers to  create the first civil-rights musicals. A famous opera singer in her own right, Susheel has set her film release on PBS later this year. On August 12th, you can learn the story of Miss Bibbs and her amazing new film. Don't miss it.

Film Synopsis: A paranormal thriller tells the parallel storylines of the past and the present as the characters are forced to decide between forgiveness and seeking the revenge they were denied in the past.

LEAD: Elizabeth: (Ethnicity diverse actress sought.) re-incarnated too quickly, she has anger, betrayal, and need for revenge from her previous life. Distrustful of others and her own emotions, Elizabeth only comes emotionally alive within the novels she writes. Although she is cold and distant with most, she is a good and loyal friend.

Judy:  Aearly 50's who looks appears as a hard, controlling bitch, she is in fact a wounded soul, who learns her whole life has been a lie.

Elaine: over 50 any ethnic background. Long time companion of Amanda, she is a woman who knows many secrets.

Audrey:  Judy's mother, she is in her 20's. She learned early how to survive at any cost. Becoming Randolph's wife gave her the security and respect she desperately needed. But she wanted also wanted what she couldn't have--his love. She is willing to do anything, including murder, to get it.