Plus a 4:30pm ENCORE of Every Day Sunshine!

This was part of a very special weekend including a performance by Crazy Ballhead and Mr P. Chill and the Trunk of Funk Saturday Night PLUS a Friday night premiere of Left and Loose in "On the Lot". Featuring producers, wardrobe and fashion designers, hair and make-up stylists and many in the entertainment industry! 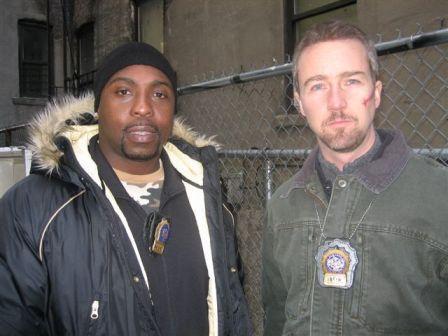 The story of Christopher Michael Holley  is truly one of those rare Hollywood success stories.  One of seven children, Chris grew up in loving and large working class family in Yuba City California.
On a lark, and mainly for extra money, Chris attended an open call for Nike and was thrilled when Nike not only signed him for the print campaign but also asked him to sign a three year exclusive contract.
As he honed his skills and knowledge he landed commercials, print work and Indie films several receiving critical acclaim such as his film “The Twelfth hour”, The Place Called Sacramento film for which Chris played the first African American Governor of California faced with a life and death execution decision.  The film garnered several awards and even made it to the final round of judging for “Project Greenlight.”
In 2006 came the biggest opportunity of his lifetime, an audition for a principal role in “Smokin’ Aces” the highly anticipated follow-up film from Joe Carnahan.  After 1 audition and 2 callbacks Chris received the call every actor dreams of, he booked the memorable and critical role as “Bernard Alfonso-Beanie” playing opposite Jeremy Piven, Common, Ben Affleck, Ryan Reynolds and Ray Liotta.
Since that time, Chris has landed principal roles opposite Ed Norton in “Pride and Glory”, Lou Diamond Phillips in “The Conjuring”, George Clooney in “White Jazz” (the sequel to L.A. Confidential), Kevin Spacey in “21” and the auditions continue.
If you were to ask Chris today what his biggest success has been in life he would tell you family first, career and then he would tell you about a lifelong dream realized.  In 2006 Chris established a foundation in his father’s name to raise scholarship money for minority students and to date has already raised over $20,000.  And this, as Chris will happily tell you, is only the beginning! August 6th, meet actor Chris Holley!

4) Hair and make-up for film