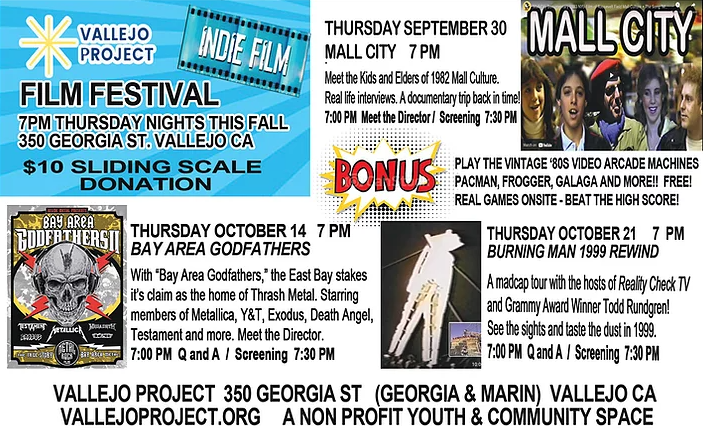 Film festivals in the North Bay are few and far between, exempt from the multiple film festivals held year-round with the California Film Foundation and the Sacramento Film Festival. However, Vallejo has stepped up its arts and entertainment events in recent years, especially within the film department. Just recently Adrian Burrell, an Oakland/Vallejo local graduated from Stanford with an MFA in documentary filmmaking. Additionally, on September 26th, 2021, Vallejo held its third annual Sprouts Film Festival at the Empress Theatre - Vallejo's oldest cultural entertainment center at over 100 years to date.

However, don't be alarmed if you have missed the event! Vallejo is now holding an Independent Film Festival every Thursday this fall at 7pm. Starting September 30th, 2021 the sliding scale donation fee is $10. The event is organized and ran by the Vallejo Project, a local non profit youth and community space.

The first of these filmd to be premiered is Mall City; a documentary going back as far as 1982 to bring audiences into the mall culture of the eighties. There you may meet the director, and even play some vintage arcade games from your childhood for free when coming to the event!

With more events to come, keep a lookout for Vallejo's talent this fall. If you miss one Thursday, there's always the next! Catch the film festival at 250 Georgia Street in Vallejo, CA 94591.