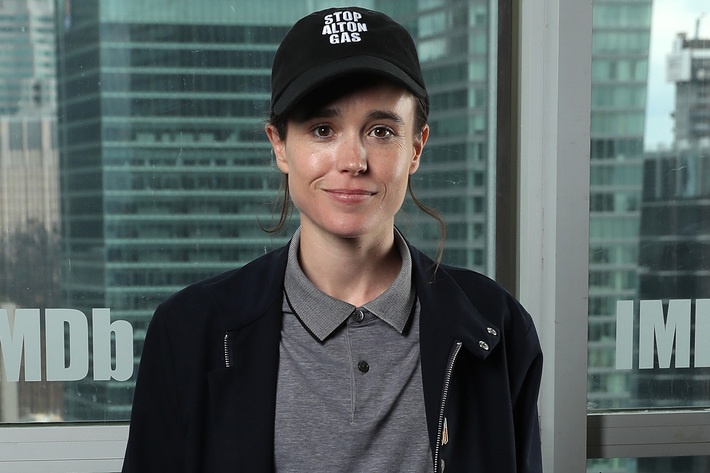 "I can’t begin to express how remarkable it feels to finally love who I am enough to pursue my authentic self," Page shared in a statement on Tuesday.

Elliot Page, the Oscar-nominated actor who has starred in Juno and The Umbrella Academy, has announced he is transgender.

Page, formerly known as Ellen Page, shared the news on social media, expressing "overwhelming gratitude" for those who have supported him.

"Hi friends, I want to share with you that I am trans, my pronouns are he/they and my name is Elliot. I feel lucky to be writing this. To be here. To have arrived at this place in my life. I feel overwhelming gratitude for the incredible people who have supported me along this journey. I can’t begin to express how remarkable it feels to finally love who I am enough to pursue my authentic self. I’ve been endlessly inspired by so many in the trans community. Thank you for your courage, your generosity and ceaselessly working to make this world a more inclusive and compassionate place. I will offer whatever support I can and continue to strive for a more loving and equal society," he wrote.

Page asked "for patience" following his announcement, noting "my joy is real, but it is also fragile." The actor shared the fear of invasiveness over their news, as well as concern over discrimination and violence fueled by the fact 40 transgender people have been murdered in 2020 alone.

"To the political leaders who work to criminalize trans health care and deny our right to exist and to all of those with a massive platform who continue to spew hostility towards the trans community: you have blood on your hands. You unleash a fury of vile and demeaning rage that lands on the shoulders of the trans community, a community in which 40% of trans adults report attempting suicide. Enough is enough. You aren't being 'canceled,' you are hurting people. I am one of those people and we won't be silent in the face of your attacks," they wrote.

"I love that I am trans. And I love that I am queer. And the more I hold myself close and fully embrace who I am, the more I dream, the more my heart grows and the more I thrive. To all the trans people who deal with harassment, self-loathing, abuse, and the threat of violence every day: I see you, I love you, and I will do everything I can to change this world for the better," Page wrote at the end of his statement.

Page's wife, dancer Emma Porter, shared support on her own Instagram account, writing "I am so proud of @elliotpage. Trans, queer and non-binary people are a gift to this world. I also ask for patience & privacy but that you join me in the fervent support of trans life every single day. Elliot’s existence is a gift in and of itself. Shine on sweet E. Love you so much."

Page uses both he/him and they/them pronouns and describes himself as transgender and non-binary, meaning that their gender identity is neither man nor woman.

Born and raised in Halifax, Nova Scotia, Page worked in Canadian television before making his first stateside splash in 2005 revenge-thriller Hard Candy. He then played Kitty Pryde, aka Shadowcat, in 2006's X-Men: The Last Stand. But it was their starring role in Jason Reitman and Diablo Cody’s indie Juno, that cemented their stardom and earned him an Academy Award nomination. Other notable roles for Page include Christopher Nolan's Inception and Netflix's The Umbrella Academy. Last year, Page made his directorial debut with the documentary There's Something in the Water, which focuses on environmental racism faced by indigenous and African Nova Scotian women.

Netflix announced in November that it was handing out a third-season renewal of The Umbrella Academy, where Page stars as Vanya Hargreeves (and ultimately, The White Violin). Sources told The Hollywood Reporter that Page will continue in the role and that Netflix is in the process of updating Page's name on all titles on the service in which he's involved. The streamer also congratulated Page following their announcement, writing on Twitter, "So proud of our superhero! WE LOVE YOU ELLIOT! Can't wait to see you return in season 3!" The Umbrella Academy's own account shared the same sentiment on Twitter.

Many in Hollywood were quick to support Page on social media, including Natasha Lyonne, Miley Cyrus, Emmy Rossum, Olivia Munn, and Alyssa Milano.

Pop band Tegan and Sara Quin wrote on Twitter, "Your strength, bravery and activism - not to mention all the art you contribute to this earth - is truly special. Thank you for being so open about your journey and for fighting so hard to make the world a better place,"

Kevin Smith offered up some fan love for Page on Twitter, writing "I’m so happy for you! (Elliot’s one of the only actors I’ve ever fanned-out over in person. Cannes ‘06, I was using the WiFi in the hotel lobby the morning after the XMen3 premiere. I saw Elliot quietly reading and had to go over to bug him and gush.)"

Guardians of the Galaxy 3 director James Gunn tweeted, "Elliot, I love you, am proud of you, and admire you. Please keep being a beacon of courage, compassion, and strength for all of us."

"Elliot Page has given us fantastic characters on-screen, and has been an outspoken advocate for all LGBTQ people," said Nick Adams, GLAAD’s Director of Transgender Media. "He will now be an inspiration to countless trans and non-binary people. All transgender people deserve the chance to be ourselves and to be accepted for who we are. We celebrate the remarkable Elliot Page today."

Page came out as gay in 2014, making the announcement in a deeply personal speech delivered before several hundred attendees at Time to Thrive, a conference to promote the welfare of LGBT youth held at Bally's Hotel and Casino in Las Vegas, Nev.

"I'm here today because I am gay," Page told the audience, "and because maybe I can make a difference, to help others have an easier and more hopeful time. Regardless, for me, I feel a personal obligation and a social responsibility. I am tired of hiding and I am tired of lying by omission. I suffered for years because I was scared to be out. My spirit suffered, my mental health suffered and my relationships suffered. And I'm standing here today, with all of you, on the other side of all that pain."

Since their public coming out, Page has become one of Hollywood's most outspoken advocates for the LGBTQ community, serving as host of Vice's travel series Gaycation (in which Page visited cities around the world and explored different perceptions of LGBTQ culture) and taking on the role of an out gay woman in Freeheld, a romance drama centered on the fight for gay rights.

Article by: Sharareh Drury for the Hollywood Reporter.