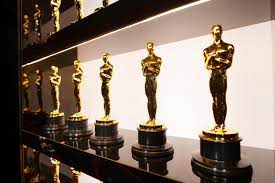 Analysis: The academy recognized a diverse lineup of performers and some movies that might have been overlooked in a normal year. But the question of ratings hangs over the show.

Hollywood is coming off a miserable year.

The coronavirus pandemic halted productions and shuttered theaters in big cities across the country, leaving the film industry virtually paralyzed for months and starved for ticket revenue.

But the crisis created an opportunity for streaming services — and potentially provided more cultural oxygen to small-scale projects that might have otherwise been overshadowed by the usual glut of superhero blockbusters, big-budget epics and generic entertainment geared for mass audiences.

The new reality was reflected in the nominations for the 93rd Academy Awards announced Monday.

The list is heavy on titles that debuted on platforms like Netflix and Amazon, which thrived during the months of couchbound lockdown. The key categories also feature films that might be described as more intimate or challenging — and noticeably more diverse — than your prototypical awards season contenders.

"I let out a little yelp when I saw the nominees," said Nell Minow, a film critic and corporate governance expert, pointing to strong showings by low-key, thoughtful dramas such as Lee Isaac Chung's "Minari" and Chloé Zhao's "Nomadland".

"We're seeing a lot more diversity partly because the normative white male blockbusters had to step aside last year," Minow said, referring to the movies that were postponed amid the pandemic

In recent years, the academy has certainly started to embrace more unorthodox films.

Bong Joon Ho's "Parasite," a genre-bending tale of income inequality, took the best picture honor at last year's ceremony; two other recent champions, "Moonlight" and "The Shape of Water," also broke traditionalist ideas of what constituted a best picture winner. The mild period pieces and bland underdog stories that used to dominate the Oscars have been fading for at least half a decade.

The last few years have also seen more nominated films from independent distributors or art house divisions of major studios, as the principal parts of Disney, Warner Bros. and Universal Pictures have concentrated more of their resources on effects-driven franchises. (Universal Pictures is a unit of Comcast, the parent company of NBC News.)

But the trend was particularly pronounced this year.

The relative lack of zeitgeist-swallowing hits in the vein of "Joker," "Black Panther" or "A Star Is Born" meant there was more room for the quiet, human-scaled productions: Florian Zeller's "The Father," "Minari," "Nomadland," Darius Marder's "Sound of Metal." All four films earned spots in the best picture race.

The list of best picture nominees also includes two projects that could be considered boundary-pushing: Shaka King's "Judas and the Black Messiah," an uncompromising portrait of the Black liberation movement of the 1960s, and Emerald Fennell's "Promising Young Woman," an audacious #MeToo-era revenge thriller.

The lack of box office behemoths that might draw in casual viewers presents a challenge to the producers of the show, said Chris Beachum, the managing editor of the awards prediction website Gold Derby.

"The nature of the movies probably does not spell great things for this year's ratings," he said, acknowledging that Nielsen ratings for various live events have declined in recent years as cord-cutting has surged. "The job for these producers is incredibly difficult​."

Some of this year's nominees fit more conventional criteria for Oscar contenders. David Fincher's "Mank" and Aaron Sorkin's "The Trial of the Chicago 7" are period pieces with familiar dramatic frameworks — although "Mank," a black-and-white film dense with historical allusions and Hollywood lore, is probably the more creatively daring of the two.

The academy's recognition of projects centered on people of color or led by underrepresented filmmakers could also be a direct result of the organization's efforts to diversify its membership ranks in the wake of the #OscarsSoWhite hashtag and the broader social push for inclusion in entertainment.

Nine of the 20 acting nominees are people of color, including Riz Ahmed ("Sound of Metal"), the late Chadwick Boseman ("Ma Rainey's Black Bottom"), Steven Yeun ("Minari"), Andra Day ("The United States vs. Billie Holiday") and the stars of "Judas," Daniel Kaluuya and LaKeith Stanfield. In a first, two women — Zhao and Fennell — were recognized in the best director race. (They join just five other female directors who have been nominated in that category.)

The academy these days includes far more women and people of color, as well as younger and more international voters. In late June, The Hollywood Reporter pointed out that, since 2015, the organization has doubled its female membership, tripled the number of people of color and nearly tripled its number of international members.

"Last year, the Academy invited its most diverse class of members to date," Lulu Wang, the writer and director of "The Farewell," tweeted after the nominations were announced.

It remains to be seen whether a meaningful number of people will actually watch the ceremony.

In the last decade, viewership of traditional linear television has been on a steady decline — and live awards show telecasts have been hit particularly hard. The ratings for the 78th Golden Globes last month, which recognized nearly all of the same movies, dropped by 63 percent over the previous year's telecast and hit a 13-year low. The ratings for the 63rd Grammy Awards on Sunday night also tanked.

But awards shows might offer a weary nation some idle escapism after a difficult year, as Gold Derby editor Joyce Eng recently said. In any case, the viewers who tune in to the Oscars on April 25 will be treated to a veritable showcase of distinctive films that, in a normal year, might have flown under the radar.