An Interview with the Fashion On Film 2020 Break Out Star

How did you get involved with Fashion On Film?

We were friends. I'd known you, Marty, through a local boutique. You had heard of me when I 1st got back to Sac from New York City. I had a swimwear line that you had already heard of so you asked me to be a part of the show. At 1st it was just as a vendor at the show so I said "OK. Why not?" FOF gave me a table at the event and I brought a model. It's funny, cause I got a little bit of flack for that 1st show. Our model was very voluptuous (not fat, muscular) and modeling a swimwear.  But a lot of the older women, a little more conservative felt that was distasteful..lol... Other than that I enjoyed myself.

And later we asked you back right?

That was when I was able to do a full showing of my collection. That required much more work and detail. Collecting models, hair and make-up. It required a full team for a full fashion show. I think that was the Prince-themed year. And then I actually did the styling for the film section where we did a movie with Richard Pannell that was a spin-off kind of fashion idea. We got locations, actors, and models that were part of that short video which aired as a part of the film component. 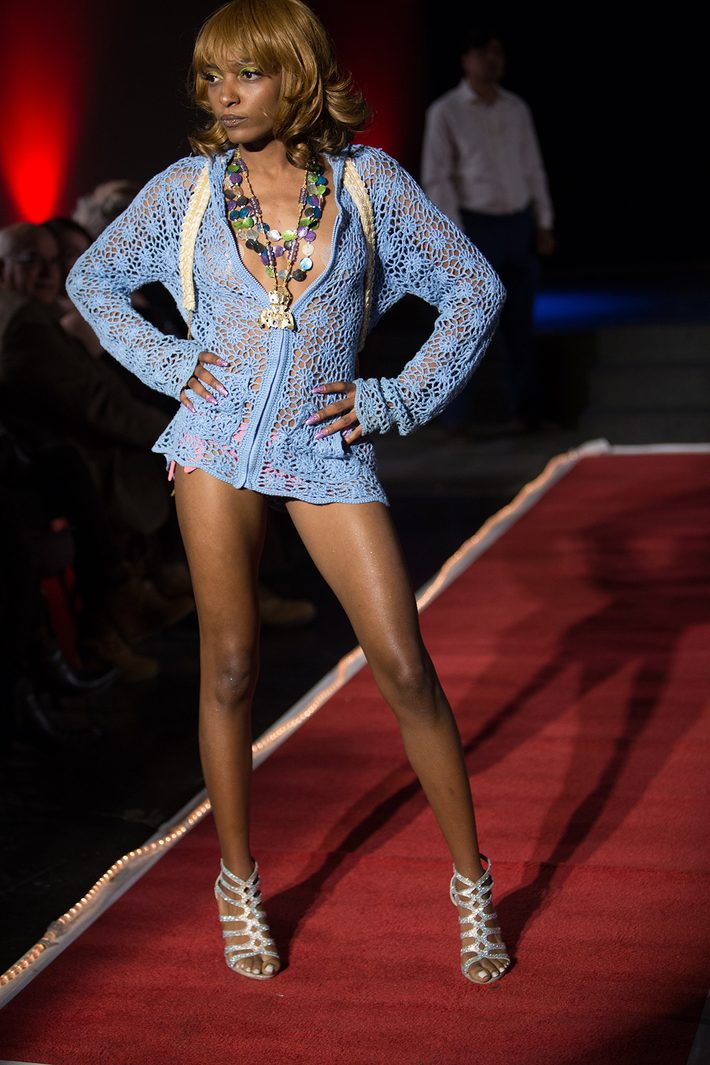 It went really well. We coordinated really well and had a good group of people. We had BJ Colston as our videographer, Matt Gilliam was AD and Richard was producer. It was kind of like a silent film that referenced Sin City and other popular themes.

So generally, for folks that weren't there, how did the films and live fashion components tie together?

Well, they were 2 separate things that blended actually. But for me, to be a part of shooting a stylized film was really fun! I've done a lot of still shoots and music videos but this was exactly what I needed to do at the time. It was kinda cool to flex both of those muscles. It's one thing to have a fashion show but to tie in a film that has its own content, plus get the hair and make-up... it is more strenuous to say the least. Most of these models have never done any form of acting. But it was a great opportunity for them to really see what it entails to be a part of the film aspect.

Tell me about this year's experience?

This year was a Lil different cause I haven't done anything fashion-wise in a while. Took a two-year break. So to be back in that environment was like using a talent I'd shelved for a while...so it was difficult. The coordination was tough. We had too few models and limited resources. Things keep changing. So when you have to make changes it's not easy. I don't want to have a tude or sound like a diva but its tough. It all worked out in the end. We got all the girls to my house, got their looks together. I only had 1 make-up artist but it worked out cause a lot of the girls knew what they were doing. So we were able to piggyback off of each others' talents. Very cool to have people who come prepared. My models were ready. Make-up, shoes. We all worked with what we had and made it a success.

What would you say to a designer or filmmaker wanting to be involved next year?

Be prepared. Plan. Have additional back up plans in case things fall through. Rely on your skillset. Ask questions even if you think it sounds dumb. Cuase it might save you a lot of time and energy later. Plan your time effectively and show up early. And listen. Often people come in a situation they think is glamourous. They wanna network and be social.  But there is a LOT of work involved. It's not about networking if you have a job to do. You need to know the run of the show so you can be prepared. And repetition. Continue to keep doing shows. One show does not make you a pro. The environment changes from show to show. The greatest people are still evolving. But they continue repeating and evaluating. Look for perfection, of course. But how you discover that perfection is to evaluate the flaws 1st.

We are getting ready to show the FOF film version of the live showcases from 2020. What are you looking forward to about that?

It will be kinda cool to actually see something. I'm in the back of the house the entire time during a show. I wanna see how it all came together. I didn't get to see how the films integrated. This gives me the opportunity to finally see what happened in the front of the house. That is what I'm excited to see. And see how the audience reacts to the show. I didn't get to see that. At run-throughs nobody is there. No audience. Nothing. So that will be cool to see the audience reaction.

Thank you for giving us a glimpse behind the scenes. What's coming up next for you?

I'm still in the process of establishing an S corp and trademark but I'm also in school learning a whole new skill. AG business and horticulture. That's my focus now. I do enjoy being a part of the Fashion community but am spreading my wings. Also, due to COVID, things are changing. So I'm restructuring and analyzing my own life. Food, food safety. Knowing where my food comes from is what I'm focussed on now.