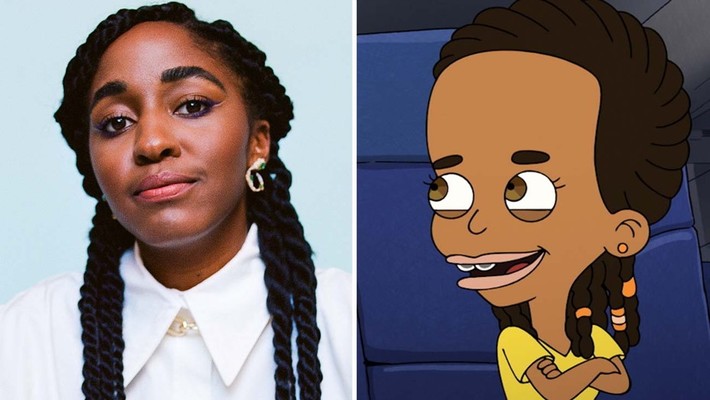 Co-Creator Andrew Goldberg talks with The Hollywood Reporter about recasting the role of Missy and how new castmember — and writer — Ayo Edebiri is making her mark on the Netflix animated favorite.

Jenny Slate made headlines earlier this year when she relinquished the role of Missy on Netflix's Big Mouth, joining several other white actors in stepping down from playing animated characters of color. Partway through Big Mouth's just-released fourth season, fan-favorite Missy is given a new voice — that of comedian Ayo Edebiri, who had fallen in love with the character as a college student and was already part of the show's writers room. (Slate will continue voicing other characters on the show.) But recasting a character in the middle of a season — especially one that had already been submitted to Netflix as a completed project — wasn't easy.

Big Mouth co-creator Andrew Goldberg — the inspiration for Andrew (John Mulaney) on the show — talked with THR about the challenges of the midseason recasting, the serendipity of finding the perfect place to transition Missy's voice from Slate to Edebiri and why it's so important to make sure the girls can be just as gross as the guys.

How did the Missy recasting happen?

Jenny playing Missy is something we had been talking about for a couple years. It was something that Jenny initially brought up and we had this dilemma, which was that on the one hand, if we had known then what we know now, that’s not how we would have cast the part. But at the same time, we had this character who Jenny was playing so beautifully, and in a way that was making a lot of people feel seen in a way that they hadn’t before, because Missy is such a unique biracial character.

And then in the spring, when Black Lives Matter rose to greater prominence, Jenny came to the realization that it was past time for her to step down. We supported her, and we had this big conversation with our Black writers and a few Black performers. [They] all agreed that they loved what Jenny had done and appreciated the character that she had created, but that the right thing to do was to make space for a Black actor to play the part.

Was there anything that surprised you in that conversation?

Something that I didn’t expect but as soon as I heard it, it made total sense, was that once the part was being played by Ayo, they felt like they had even more freedom to tell stories about Missy’s race and her racial identity.

[Writer] Brandon Kyle Goodman in particular talked about how part of puberty for him was recognizing his Blackness and what that means and how people perceived it. You start with a little bit of innocence, but as you reach this age, it becomes a bigger part of your life. So for him, growing into his racial identity was very much a part of his puberty. That was something that I didn’t experience as my puberty, and that's the whole reason why it makes sense to have a diverse writers room with people who had all these different experiences growing up.

When did this issue of representation in animation voicing come on your radar?

I think it really came to our attention first via Jenny. We started talking about it before the world at large seemed to be talking about it. And then, once we made the decision to recast the part, we did it differently than we normally do it, where we think of somebody who would be great and ask them if they want to do it.

In this case, we cast a very wide net. We went through agents in the traditional way, but we also had people tweeting us and sending us Instagram posts of like, "listen to me do my Missy." We had our casting people track those people down and put themselves on tape.

We listened to dozens and dozens of Missys. And we brought back six or eight people to work with us over Zoom. It was a really cool process, and it was a chance to meet a ton of actors, some of whom we have since used on our shows because we liked them so much.

But with Ayo, it was very special for us. She was a writer on season five of Big Mouth, so she was already part of the family. She is also new and young. She was in college when she first saw Big Mouth and became attached emotionally to Missy. And we knew going in that Ayo shares a lot with Missy. She will say it herself, that she felt she was a Missy growing up.

There’s something with Missy where there’s this nervous, endearing, cerebral energy that is very hard to fake. Like, it has to be real within you to play. And Ayo really had that from the beginning.

In the second episode, Missy, still voiced by Jenny, says, "I’m really struggling with my racial identity right now. My mom is white, my dad is Black, I am voiced by a white actor who is 37 years old." Where did that line come from? Was it improvised by Jenny? Or did it come from the writers?

Kind of both. That was something borne out of those conversations that we had been having with Jenny about what it means to have a white person voicing a biracial character and whether that’s OK. We wrote that probably a year and a half ago. We felt like we needed to acknowledge it in some way and not just pretend it didn’t exist.

Was it challenging to shift gears with that recasting midseason?

We are always writing and recording way ahead of the animation. To give you an idea of how far ahead we were, we had actually recorded most of season five with Jenny as Missy [at the time of the recasting decision]. So we had delivered all of season four to Netflix already when we recast Ayo with the part. The first question was, is there a way to redo all of season four? And we found that from a production standpoint, there really wasn’t.

There was also just the creative issue of, if we had [gone back and rerecorded Missy's lines], Ayo would have had to really replicate everything Jenny did acting-wise for a whole season, which was not a good recipe for a new actor to make the part her own. We were OK with asking her to do that for like 20 lines or so in the last two episodes, but to ask her to do that for hundreds of lines felt antithetical to what we were trying to do, which was handing over the part to Ayo and giving her an opportunity to make it her own.

To clarify, because the animation had already been based on Jenny’s acting for season four, you didn’t want to go back and have Ayo mimic Jenny’s acting?

Exactly. We didn’t think that that was a fair thing to ask of Ayo, or any actor, when they are taking over a part.

Jen Flackett, one of our creators, found this really organic place in season four where it made a lot of sense to make the transition of the voice, because a lot of Missy’s story in season four is about reckoning with the different parts of her identity, and a big part of that is her racial identity.

In the second episode, she spends a summer with her cousins (Lena Waithe and Quinta Brunson), and is really opened up to this idea that she hasn’t totally experienced the Black part of her identity because her parents had raised her with these post-racial intentions. And then deeper into the season, she has a story about code-switching with her classmate DeVon (Jak Knight). Jak wrote that episode, which is about her getting a better sense of what society expects and demands of her [as a Black girl] in a way that she hadn’t thought of before.

The point where we make the voice change is the Halloween story. In the House of Horrors, Missy's anxiety is expressed by all these different reflections she has in the mirror of the different parts of her identity. At some point they all shatter, and she is worried that having all these different parts of her identity means that she is nothing. But then she puts the pieces together into this thing she calls Mosaic Missy. And that is the point at which Ayo’s voice takes over. Ayo is the voice of this Mosaic Missy. And then, moving forward, that’s where the voice changes and everything else Missy says in season four is Ayo’s voice.

How did the Pen15 crossover happen?

We watched the [Hulu] show and we loved it. Gabe Liedman was writing on our show part-time that season and he had worked on that show, and we had this idea for an episode where Andrew and Nick decide to date younger girls and thought that Maya and Anna would be really funny in those parts.

It was really fun collaborating with them, especially because our shows deal with the same time of life. That’s one of my favorite episodes.

Something I’ve continually wondered about the show is the gendering of various objects in the Big Mouth universe. I remember watching the episode where Jessi figures out how to use a tampon and being surprised that the tampons were men. What do those conversations look like?

Yeah, we did have that conversation. There was a moment where somebody was like, "The tampons are guys?" And Jen Flackett was like, "Yes, they’re guys, that’s how I always think of them. ‘Cause they go in, right?"

Earlier this year, there was a controversy over the movie Cuties, which led to a supposed boycott of Netflix. Have you had much backlash against your show for "sexualizing children"?

Not a ton. And when it does come, it is often accompanied by some really upsetting anti-Semitism. But it's also from people who haven’t seen the show. By and large, everybody who has seen the show gets what we’re doing. When people see the show, it’s cathartic for them because it reminds them or lets them know that there wasn’t anything wrong with them back then or isn’t anything wrong with them now.

I’ve had that experience, where Kristen Wiig’s vagina character initially made me uncomfortable. And then the more I watched, I was like, "Oh, I’m dumb, this is fine."

Kelly Galuska, who has been a writer since season one and created [the upcoming Big Mouth spinoff] Human Resources with us, when she was interviewing to be on the show, we were telling her about the pilot and how Nick sees Andrew’s penis for the first time and sees he’s got pubic hair and feels inadequate in comparison. I remember Kelly asking, are you ever going to show a vagina on the show? Nick and I were like, "Oh God no, we can’t." And Jen and Kelly were like,"You have to. If you’re showing a penis in the first episode, you can’t hold girls to that double standard." It was like, "Wow, I guess you’re right." And if you’re going to have a talking vagina, Kristen Wiig is the right person to do it.

I’m sure she’ll be flattered to read that in the pages of The Hollywood Reporter.

Article by: Inkoo Kang for the Hollywood Reporter.