From Joe Dante’s The Movies That Made Me to a niche show all about the Marx Brothers, there are plenty of options for every sort of cinephile. 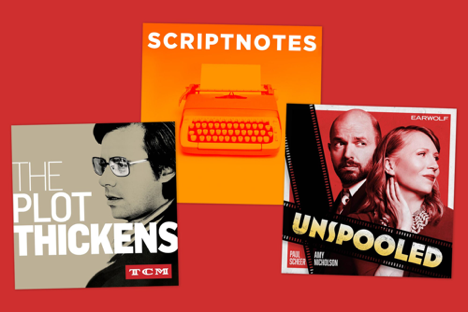 The local multiplex is closed. Film production has ceased. The summer blockbuster season is in jeopardy. But that doesn’t mean we can’t keep talking about the movies.

Podcasts are stepping into the void, keeping film buffs engaged during the duration of the pandemic. The gold standard, of course, is Karina Longworth’s You Must Remember This, an impressively-researched storytelling podcast that explores early Hollywood history (and sometimes its more recent past, as in Longworth’s spinoff series Make Me Over). But whatever your movie-love, there is probably a podcast for it. Here are eight that may broaden your cinematic horizons or inspire you to take fresh looks at familiar and favorite films.

The movies loom large in nearly every episode of this podcast that lovingly but irreverently celebrates a bygone era of Show Business, with a capital S and B. Gilbert Gottfried and cohost Frank Santopadre are encyclopedic film buffs and champions of character actors. The podcast, which features freewheeling conversations with filmmakers, actors, producers, screenwriters, historians, and iconic musicians and entertainers, recently marked its 300th episode. In its early years, mini-episodes focused on a specific classic, obscure, or under-seen film, such as Treasure of the Sierra Madre, The Terror of Tiny Town, and Local Hero.

Try this episode: “Scott Alexander and Larry Karaszewski.” The comedy writers and biopic masters are here to talk Dolemite is My Name. But before getting to the main event, the discussion digresses to “a bunch of other things nobody cares about,” like the obscure spy spoof The Last of the Secret Agents? and Otto Preminger’s mind-boggling, psychedelic ’60s farce Skidoo. This podcast is made for people who do care about those things.

Embraced by rebellious college students in the 1970s, the Marx Brothers would seem to be made for these times with their "I'm against it” philosophy, which pricked the bubbles of high society, government, and authority. The podcast was inspired by the Marx Brothers Council Facebook group, hosted by Marx historians and aficionados Matthew Coniam, author of The Annotated Marx Brothers; Noah Diamond, who recreated and mounted a production of I’ll Say She Is, the brothers’ long-lost Broadway musical, and wrote a book about it; and Bob Gassel. Special guests have included Joe Adamson, author of Groucho, Harpo, Chico and Sometimes Zeppo; Frank Ferrante, who recently marked the 35th anniversary of performing his one-man show, An Evening with Groucho; and screenwriters Scott Alexander and Cinco Paul.

Try this episode: “You’ll Duck Soup the Rest of Your Life.” An exhaustive examination of the comedy classic that conventional wisdom ranks as the Marx-iest of Marx Brothers films. But Coniam, for one, is against it, and he makes an interesting case that much of the film’s comedy is uncharacteristic of the pure Marxian spirit. Wrong, but interesting.

The Movies That Made Me

Joe Dante, director of Gremlins and founder of the instantly addictive Trailers from Hell website, and Josh Olson, the Oscar-nominated screenwriter of A History of Violence,welcome filmmakers, actors, and screenwriters to talk about films—some that you recognize, some that you’ve hardly even heard of—that rocked their worlds. Dante may or may not have seen every movie ever made, as Olson joked in an episode, but he has seen the 1958 sci-fi obscurity Space Master X-7—which blew recent guest Laraine Newman’s mind. “I am so impressed you know this stuff,” she exclaimed. The ground covered in each episode is staggering. In the Newman episode alone, references are made to such disparate films as the under-seen 1980 new age satire Serial, David Cronenberg’s remake of The Fly, and Verotica, which from the sound of it has The Room-like potential for so-bad-it’s-good cult status.

Director Peter Bogdanovich gets the Hitchcock/Truffaut treatment as Turner Classic Movies launches its first podcast. This seven-episode documentary is a meticulous career retrospective that chronicles the rise, fall, and comeback-ish of Bogdanovich, who became one of New Hollywood’s earliest successes with a Preston Sturges–like run of critical and commercial successes, starting with The Last Picture Show. This was followed by a string of flat-out flops and personal tragedy before he began to get his groove back. The podcast is culled from 15 hours of conversations with TCM’s Ben Mankiewicz. Bogdanovich is a mesmerizing raconteur and a great mimic (he does an uncanny Hitchcock). His story is the stuff Hollywood dreams and nightmares are made of.

Try this episode: Only the first two episodes, which dropped on April 28, were made available for preview. Episode two spotlights how Roger Corman gave Bogdanovich his first opportunity to direct with the well-received Targets. Subsequent episodes will be released weekly; I can’t wait for the one on At Long Last Love.

Those not fortunate enough to live in a city with a repertory movie house can live vicariously through this podcast run by L.A.’s New Beverly Cinema, which is owned and curated by Quentin Tarantino. Episodes devoted to previewing the theater’s monthly schedule are especially fun as they may cover everything from the sophisticated stylings of director Blake Edwards to a tribute to martial arts auteur Jimmy Wang Yu. The theater is temporarily closed during the shutdown, but the podcast continues to produce new episodes with an impressive lineup of guests, including Tarantino himself.

Try this episode: “Essential Comedies (with Edgar Wright).” The director of Baby Driver and Shaun of the Dead shares 10 films from his list of his 100 favorite comedies.

Screenwriters John August (Charlie and the Chocolate Factory) and Craig Mazin (Chernobyl) “discuss screenwriting and things that are interesting to screenwriters.” But anyone interested in film will benefit from these insightful and illuminating conversations and interviews that delineate the art, craft, and business of screenwriting.

Try this episode: “How to Listen.” This is a craft episode. It includes a fascinating exercise in devising realistic dialogue in which August and Mazin analyze clips of real-life speakers in conversation. The podcast attracts great guests too: “The One With Phoebe and Ryan” is an engaging discussion with Phoebe Waller-Bridge and Ryan Reynolds.

You know them; you love them; you watch them again and again. What else can possibly be left to say about such films as Tommy Boy, Basic Instinct, or The Karate Kid? Plenty, it turns out. Bill Simmons hosts.

Try this episode: “Ferris Bueller’s Day Off.” Master of his suburban universe, Ferris Bueller is to high schoolers what Indiana Jones is to archeologists, one observer notes. But is Day Off a Ferris movie, or a Cameron movie? That question kicks off this wide-ranging discussion of John Hughes’ teen classic.

On the podcast How Did This Get Made?, Paul Scheer, along with June Diane Raphaeland Jason Mantzoukas, snark their way through so-called bad movies or cinematic misfires. On Unspooled, Scheer and film critic Amy Nicholson reconsider some of the greatest movies of all time, as ranked in 2007 by the American Film Institute. Do these canonical films really belong on the list? How do they hold up? How have they influenced contemporary filmmakers? Fresh and intriguing takes on venerable movies make for entertaining listening. How Did This Get Made? is entertaining, too—but ever since they ripped on Road-House, that podcast is dead to me.