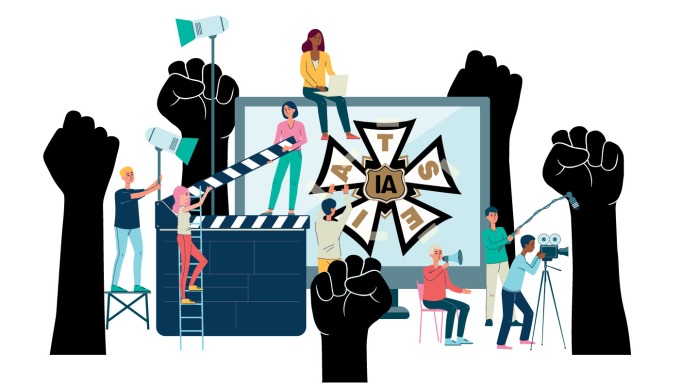 The members of the International Association of Theatrical Stage Employees have voted to approve a strike authorization, giving the union president the power to shut down film and TV production across the country.

The vote passed with 98.7 percent support, and 90 percent turnout — a resounding outcome that the union hopes will strengthen its bargaining position.

Talks have stalled between the union and the Alliance of Motion Picture and Television Producers, which represents the studios. The unions have been negotiating since May on a new contract, and are seeking to address long-standing concerns, including long hours on set, streaming wage scales and residuals, and the stability of the pension and health funds.

“The members have spoken loud and clear,” Matthew D. Loeb, the international president, said in a statement. “This vote is about the quality of life as well as the health and safety of those who work in the film and television industry. Our people have basic human needs like time for meal breaks, adequate sleep, and a weekend. For those at the bottom of the pay scale, they deserve nothing less than a living wage.”

Loeb now has the authority to send 60,000 below-the-line workers to the picket lines. But first, the union is expected to seek further talks with the AMPTP. In the statement, Loeb said he had informed the AMPTP of the outcome on Monday morning.

“I hope that the studios will see and understand the resolve of our members,” Loeb said. “The ball is in their court. If they want to avoid a strike, they will return to the bargaining table and make us a reasonable offer.“

The union believes that the authorization adds to its leverage in the negotiations. The leadership of the union and the AMPTP are expected to talk in a Zoom call at 11 a.m. on Tuesday, according to a union source.

“The AMPTP remains committed to reaching an agreement that will keep the industry working,” the group said in a statement. “We deeply value our IATSE crew members and are committed to working with them to avoid shutting down the industry at such a pivotal time, particularly since the industry is still recovering from the economic fallout from the COVID-19 pandemic. A deal can be made at the bargaining table, but it will require both parties working together in good faith with a willingness to compromise and to explore new solutions to resolve the open issues.”

The vote included 13 locals on the West Coast, as well as 23 locals around the country, including in Georgia, Louisiana and New Mexico. All 36 locals voted in favor of the authorization, with the lowest margin being 96 percent in favor. In total, 52,706 members voted in favor of the authorization, out of 53,411 ballots cast. The eligible membership, across the 36 locals, is 59,478.

The strike threat comes as Hollywood has never been busier, especially on the TV side. Soundstages are at or near full capacity, and productions have had difficulty finding enough workers to keep shooting. That has led to exhaustion and burnout, but the high demand has also emboldened union members.

“I don’t think there’s been a better time,” said John Lindley, president of the International Cinematographers Guild. “I’ve never seen the kind of unity before that we have right now.”

Union members have talked about fatigue from long production hours for decades. In previous negotiations, the studios have agreed to pay for hotel rooms for workers who don’t think they can drive home safely. This time, the unions are seeking a 10-hour turnaround between shifts for all workers, as well as a 54-hour turnaround on weekends. They are also seeking increased meal penalties, as a way to force productions to stop for lunch.

The vote comes a year after production restarted around the globe under new COVID safety protocols. Many members say the pandemic shutdown forced a reconsideration of the grueling schedules faced by film and TV crews.

“Many of our members were working from home during the pandemic,” said Cathy Repola, executive director of the Motion Picture Editors Guild. “They got to have dinner with their family and friends, not miss out on so many personal events because they weren’t having to commute on top of their long work hours. Now the notion of returning to a work site has that contrast really in their face now… it ramps things up to this insanity again where there is no true balance between work life and personal life.”

The studios have pushed for wider use of “French hours,” in which workers can get a shorter workday in exchange for giving up meal penalties and breaks. The union has dismissed that idea, saying the days would not be shorter for many workers.

Few members are eager to go on strike, however.

“No one’s gung-ho about a strike,” said Joe Martinez, a member of IATSE Local 44. “We’re more interested in having certain things become fair.”

A nationwide strike would be the first in the 128-year history of the union.

This article was published by Vogue writer Gene Maddaus.