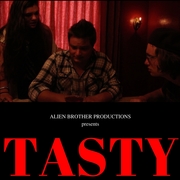 Jimmy Flynn is the producer, co-writer and star of "TASTY." He wrote the script with his brother, John Flynn, who also stars in the film. Producing and directing credits go to Blake Lyon, a filmmaking student at NYU.