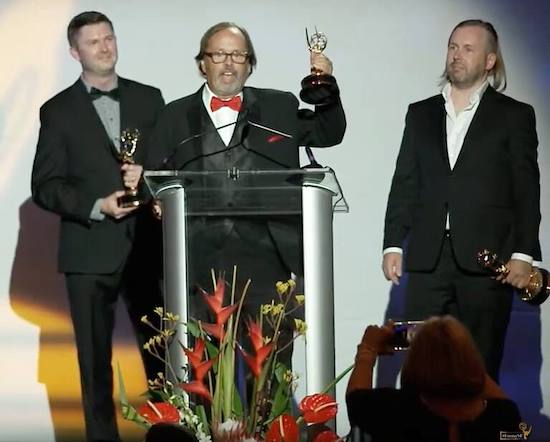 The National Academy of Television Arts and Sciences awarded a regional Emmy Award in the societal concerns category to the Sonoma County-produced documentary “3 Seconds in October: The Shooting of Andy Lopez” Saturday night in San Francisco.

Produced and directed by Sonoma County filmmaker Ron Rogers, the 28-minute documentary details the fatal shooting of 13-year-old Andy Lopez in 2013 by Sonoma County sheriff’s deputy Erick Gelhaus, and the social and political aftermath sparked by the incident.

Seven years in the making and released last year, the documentary has aired nationally on PBS. The film can be viewed at bit.ly/3MLlv2X. The documentary — based on interviews, previously confidential police investigative files and litigation records — is narrated by actor Peter Coyote, with investigative consulting by Lowell Bergman, formerly of CBS’ “60 Minutes.”

“I am so gratified and appreciative of the active support of literally hundreds of community members in Sonoma County who supported this little film,” Rogers said.

Rogers, formerly a deputy district attorney for Sacramento County and a senior trial attorney for the state of California, has been making independent public affairs documentaries since 2005.

In the more than eight years since the Lopez shooting, the incident has remained a controversial issue throughout Sonoma County and beyond.

On Oct. 22, 2013, Lopez was walking through a vacant lot on Moorland Avenue, on the southern outskirts of Santa Rosa near Roseland, and carrying an airsoft gun. An airsoft gun fires small plastic BBs, and police said the gun closely resembled an AK-47 assault rifle.

Sheriff's deputy Gelhaus and his partner were patrolling in the area of Moorland and West Robles avenues and saw Lopez walking with what sheriff's officials said appeared to be some type of rifle.

Lopez was ordered to drop the weapon. Gelhaus fired the fatal shots when he saw Lopez begin to turn toward him, authorities reported. Lopez died at the scene.

Within two weeks of the shooting, the Lopez family filed a federal civil rights lawsuit in U.S. District Court, which the sheriff’s office ultimately settled for $3 million in 2018, without an admission of liability by the county. Gelhaus is now retired.

The National Academy of Television Arts and Sciences region represented at Saturday’s ceremony covers television markets in Northern California, Nevada, and Hawaii. There were 23 television entries for this film’s category.

Beard, who grew up in Santa Rosa, has been working as a composer and orchestrator in film, television and video games in the Los Angeles area for nearly 20 years.

Beard’s original score for “3 Seconds in October” is built around a composition called “Elegy for Andy,” which serves as the main theme. The piece features a solo cello, piano and subtle analog synthesizers.

“For me, I feel it’s clear this film has tackled an issue that is sensitive for the people who have seen it,” Beard said. “It’s controversial, and it took a lot of courage to finish this film.”