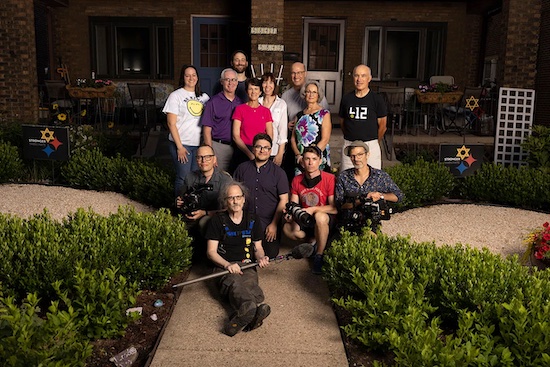 When Oakland documentary filmmaker Patrice O’Neill heard about the massacre at the Tree of Life synagogue in Pittsburgh on Oct. 27, 2018, she was, like so many others, “horrified.”

Eleven people were killed during Shabbat services by a white supremacist who shouted “all Jews must die” during his shooting spree at the Conservative shul in the heavily Jewish neighborhood of Squirrel Hill. It was the deadliest antisemitic attack in U.S. history.

Despite the horror, however, O’Neill told J., “At the same time, it wasn’t surprising. It was a really violent manifestation of what we were seeing around the country and around the world.”

O’Neill is the founder of Not In Our Town, a project of the Working Group, a strategic media nonprofit that uses film and social media to combat hate and help local leaders build safe, inclusive communities. She and her team have made award-winning films about hate crimes in many locales, beginning with their 1995 PBS special about how the residents of Billings, Montana, pushed back against white supremacist hatred in their town. These are not just films about the crimes themselves, but about how the affected communities worked together afterward — first to heal, and then to prevent future incidents stemming from bigotry and prejudice.

Would the Tree of Life tragedy become their next film? As soon as they heard the news, O’Neill and her San Francisco filmmaking and producing partner, Charene Zalis, sat down to talk.

“For at least two years we had been seeing this escalation in antisemitism around the country,”  O’Neill said. “Charene and I would talk about these incidents and how worrisome it was, and the trends we were seeing, especially among young people.”

When O’Neill would visit schools to present NIOT films, part of the educational component of her work, she would hear very disturbing stories. “There was a parent in Marin who told me that her son was walking down the hall and people would throw pennies in front of him and say, pick it up. And Marin wasn’t the only place, not by any means.” (The students were acting out an antisemitic trope about Jews being “cheap.”)

The pair decided that Zalis would take a small team to Pittsburgh that very week, meeting the community in the immediate aftermath of the attack. “We arrived the day of Rose Mallinger’s funeral and it was very moving,” Zalis told J., referring to one of the 11 killed at the synagogue during Shabbat services. “The community was still in shock, grappling with the magnitude of the attack and the pain.”

The crew shot some initial footage, and Zalis interviewed key community leaders, including Rabbi Jeffrey Myers, the leader of the Tree of Life congregation, and Wasi Mohamed, then head of the Islamic Center of Pittsburgh and a strong ally of the Jewish community.

It quickly became clear to Zalis and O’Neill that this was going to be a NIOT film. “Charene called me and she said, ‘I can’t believe how broad and strong the response is in this town,’” O’Neill recalled. “We didn’t know where the story was going to take us, but we did see very early on that this city was responding in a very powerful way. I mean, this was an American city taking an attack on Jews as an attack on the fiber of the entire town.”

And that response didn’t come from nowhere, O’Neill pointed out. “The other thing we learned early on was that Pittsburgh, particularly the Jewish community, had relationships in place that had been built over a long period of time. They had relationships with civic leaders, with elected leaders, strong interfaith relationships. They had cultivated what was needed to mount a defense.”

That integrated community response is at the heart of the just-completed film, “Repairing the World: Stories from the Tree of Life,” which will have its premiere May 5 at the Pittsburgh Jewish Film Festival. The film was directed by O’Neill with Zalis as reporter and field producer. It has been submitted to several Bay Area film festivals, including the San Francisco Jewish Film Festival, but will not be available to the general public before this fall.

At just over an hour and a half, it is a moving and sensitive examination of how this city pulled together after the vicious massacre, along with a pointed look at the rise of white nationalism that inspires such attacks.

It took three years to complete the film. After Zalis’ first visit to Pittsburgh, the team spent six months talking to community members by phone to gain their trust and ascertain whom to interview. This wasn’t a TV news crew swooping in, shooting video and leaving; Not In Our Town’s approach involves building long-term relationships with the communities they film, so the work of healing and prevention can take root.

“For us it was really important to find out whether this would be welcome,” O’Neill said. “This was a deeply traumatized community. We were not going to call the families right away and say, hey, do you want to talk about this? Charene did some really important initial interviews, but we knew that the deeper work would happen over time.”

In April 2019, just six months after the attack, a NIOT team returned to Pittsburgh, this time with O’Neill at the helm. It was the first of many trips she would take as she got to know people in the Jewish community and the many others who stepped up to help. The very first action, which Zalis was able to record for the documentary, was a memorial rally right after the massacre organized by local high-school students, Jews and non-Jews. Other acts of solidarity followed. Anti-hate groups formed. Bonds between faith and ethnic groups were strengthened.

And three years after the horrendous attack, Pittsburgh residents shared what they had learned at a high-profile gathering of more than 100 anti-hate experts, “Eradicate Hate Global Summit 2021.”

So far, “Repairing the World” has been shown to select, largely Jewish audiences. But O’Neill, who is not Jewish herself, said this is not a film just for Jews. “For me, this was a story that I couldn’t turn away from. And I firmly believe this is not a story that should just be shared or understood by Jewish people. It should be seen by anyone concerned about the rise in hate, the rise in racism, concerned about what’s happening to LBGTQ people.

Jim Busis, publisher of the Pittsburgh Jewish Chronicle, headed up local Jewish coverage of the massacre and its aftermath, and was also interviewed for the film. He said the filmmakers got it right, from the feelings of gratitude the Jewish community felt for their neighbors who stepped forward, to the emergence of interfaith groups that persist to this day.

“The documentary does an admirable job of covering the highlights of the immediate events and three years of the aftermath, selectively but accurately giving viewers a feel of what the community experienced,” Busis told J. “I think this will be an important film, not only for explaining the attack on Tree of Life and its aftermath, but also for spurring positive actions against all forms of hate across the U.S.”