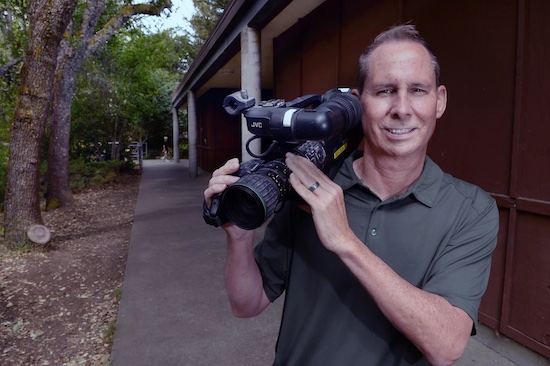 Kevin Rapp was once on track be a successful filmmaker, but life had other plans. He became a teacher in Novato.

Now wrapping up his education career, Rapp can still point to a legacy of filmmaking. He carved out a niche shooting movies at Sinaloa Middle School.

“I turned the school into a mini-Warner Brothers set,” said Rapp, 60, who is retiring next month.

Rapp says he was inspired to make films at an early age. His favorite movie was “Jaws,” and he “wanted to be Steven Spielberg.”

After graduating from college in New York, he moved to Los Angeles to try his luck. He created and produced the 2002 independent film “Reflex Action,” which aired on ABC and is still streaming on various platforms.

“I wanted to make blockbuster action films,” he said. “Two hours of nonstop action — that’s what I wanted to do.”

Instead, after a move to the Bay Area for personal reasons, Rapp went on to make a series of monster, zombie, science fiction and horror videos using Sinaloa as the setting and students and staff as the actors.

Rapp, a special education teacher at the school for the past 15 years, will leave behind a legacy of more than a dozen such movies.

“The magic behind Rapp’s movies — aside from the legit quality of the films — are the students who star in them,” said John Matern, dean of students at Sinaloa. “Rapp took kids from the corners of the school who otherwise led a very quiet, unknown, under-celebrated existence and turned them into stars.”

For Kyle Chernoff, 26, who starred in the first Rapp film, “Sixth Period,” when he was in seventh grade at Sinaloa, the experience unleashed a confidence that he hadn’t felt before.

“I was on the quieter side,” said Chernoff, who was a general education student but had what is called a “resource” class with Rapp to get support and help with homework from his other classes. “It helped me crack that shell.”

“‘Sixth Period’ is about when zombies take over the school and he is trapped in class with his friends,” Rapp said. “We showed it to the whole school.”

Chernoff and others came up on stage afterwards and were celebrated by students and teachers.

“It helped me build the confidence to do more things,” Chernoff said. “It helped me to put myself out there.”

He went on to join the varsity football squad at San Marin High School. A running back and team captain, Chernoff was named a leading rusher in Marin.

Chernoff, now a San Francisco police officer, said it was not only being in the movie that helped him, but also his relationship with Rapp, with whom he has kept in touch.

“He was able to find unique ways to get students to want to learn,” Chernoff said. “It made me look forward to going to school.”

Similarly, San Marin High School sophomore Giovanna Boggeri said she starred in two Rapp movies in sixth and seventh grades. Those would be the last of Rapp’s movies, because when she hit eighth grade, the COVID-19 pandemic shut down production for the next two years.

Boggeri said she has continued to draw on the experience of the movies when coming before the public — including being on television. Boggeri, who has epilepsy, appeared on local television in New York last week to meet World Wrestling Entertainment star Drew McIntyre. The Make-a-Wish Foundation arranged the meeting to fulfill Boggeri’s wish to meet McIntyre, one of her heroes.

Rapp said he would start off each movie at the beginning of the school year, meeting with students to create the story line. Rapp and the cast would shoot the movie during breaks, at lunchtime and on the weekends.

“It’s such an amazing campus, with a creek running through it and some wilderness areas,” he said. “And I had 900 extras — kids who all were dying to be in the films.”

At the end of every year, the entire school would gather in the gym to watch that year’s movie and laugh and scream with delight, he said.

“It was such a great time — so amazing,” Rapp said. “I was completely hooked.”

Rapp’s favorite of the more than dozen movies he has made is “Room 213,” which was so popular that he made a sequel, “Return to Room 213.”

“It was a true horror film,” Rapp said. “It was shot at night, the setting was Halloween night, in a haunted classroom.”

“I wanted to see 900 kids scream — and boy, did they scream,” Rapp said of the movie’s showing before the whole school.

Other favorites are “The Sinaloa Games”— a “Hunger Games” takeoff — and “Bigfoot,” where the legendary monster is spotted on campus and groups of students go out to find it.

Retired Sinaloa math teacher Paula Freeman said that even though the films included both general education and special education students, the latter might have benefited the most.

“By putting this population of students in the limelight, it gave us a new perspective of the ‘special ed student,'” she said. “The movie acted as an outlet that gave Kevin’s students the opportunity to shine and proved to the general ed population that these kids have strengths and talents reaching beyond the contents of a textbook and traditional learning.”

“This opportunity afforded these students a chance to feel special and get well-deserved accolades from their teachers and peers,” Pritchard said.

Rapp, who lives in Petaluma during the week, said he is retiring to live full-time with his wife and three children, who moved to Placer County several years ago.

He plans to finish writing a children’s book and to dust off “Reflex Action” so he can add some post-production tweaks and digital remastering that he wasn’t able to do 20 years ago. He also plans to hike every day, play pickleball and do some substitute teaching.

Although he didn’t plan it that way, Rapp said he is grateful that his filmmaker ambitions created the vehicle to help kids come into their own, gain more confidence, have fun and change their lives for the better.

“In hindsight, I gave up on my Hollywood dreams, only to have me find them again in a middle school,” he said.