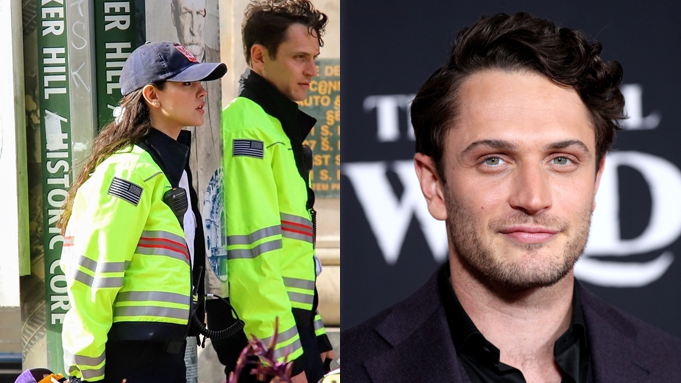 In the movie, which opens Friday, Woodell plays a rookie EMT named Scott, sharing scenes with the top-billed Eiza González.

González plays his more experienced partner, Cam Thompson, who gets kidnapped by adoptive brothers Will (Yahya Abdul-Mateen II) and Danny Sharp (Jake Gyllenhaal) when a bank robbery goes awry. They hijack her ambulance and embark on a chase/escape that lasts for most of the rest of the movie.

Woodell says he did some research on being an EMT, and even tracked one down to interview.

“The reality is that there’s only so much an actor can do because most of their job is preparation, like cleaning the truck and making sure everything is ready for the day,” he says.

In one of his first scenes, which was also his first day of shooting, Scott and Cam arrive at the site of a grisly car crash where a metal post has pierced the torso of a young girl.

“Nothing prepared me,” he says. “When you’re working on a Michael Bay film, there are no floaty devices. You just jump right in. Thank goodness I can drive an ambulance because no one checked. And Michael does that intentionally. He wants to create chaos because it gets captured in the film.”

Via phone Woodell recently talked about growing up in The City, and acting at a young age while enrolled in the youth program at the American Conservatory Theater.

He performed works by Arthur Miller, and of course “Our Town,” while headquartered at the Children’s Creativity Museum, a.k.a. Zeum, in Yerba Buena Gardens.

“I did ‘Christmas Carol’ a couple of times. That was the pinnacle,” he says.

Those shows were performed on the glamorous stage of the Geary Theater, the young actor intermingling with seasoned professionals as well as MFA students from ACT.

“It was probably a circus for the adults,” Woodell says. “I remember my class came to visit me and see the show for a field trip. They all gave me a standing ovation, and I threw my arms in the air, which is not protocol, and I got a scolding from my teacher.”

The actor attended St. Ignatius College Preparatory before moving to Los Angeles to earn his degree at USC and launch his career. His home base and his family are still in the Bay Area, and he says he tries to visit at least once or twice a year, and plans to “have some semblance of a home” in San Francisco someday.

“It’s so weird… the longer I was away from home, the more the Bay Area seems to change and evolve,” he says. “I feel like a lot of the people I knew began to leave. It’s a strange feeling to go home and not have all those people there, and to go down a street and your favorite restaurant isn’t there. But every time I’m home it’s the best feeling in the world. It’s like pressing a reset button.”

According to his Wikipedia page, Woodell is currently “best known” for his role as Rick Betancourt on the TV Series “The Purge” (based on the movie franchise) and for his lead role in the 2018 horror sequel “Unfriended: Dark Web.”

“Those were the types of roles that found me and I found them,” he says. “Acting in the genre is so much fun. It’s taxing, for sure, and putting yourself in dangerous situations is challenging. Coming straight out of drama school, that channel of myself was really accessible.”

However, he confesses he’s not a fan of watching horror films. “I get scared very easily,” he admits.

Another break came when he was cast in the 2020 film “The Call of the Wild,” based on Jack London’s classic novel, alongside Harrison Ford. Woodell found himself starstruck by the living legend.

“You introduce yourself and they say their name, and it’s like… well, yeah,” he laughs. “I shook his hand and said, ‘It was such a pleasure working with you.’ He just had this familiar look in his eye, like, ‘You and me, we get it, but the rest of the world doesn’t.’ He has that charisma.”

On working with Bay, Woodell says, “He beats to his own drum. He was one of the guys; he just wants to talk and hang out and suddenly remembers he’s making a movie. He does everything, and he does it at a pace that I’ve never seen before. He operates the camera. He’s lighting from windows 30 stories up. Things so intricate that they’re not on the surface.”

Despite the chaos, Woodell had a great partner in González. Her experience working on Hollywood productions of this size, such as “Fast & Furious Presents: Hobbs & Shaw” and “Godzilla vs. Kong,” was an asset.

“She had some knowledge to share with me along the way. She set the tone for me. She was remarkably thorough. She even went head-to-head with Michael. She’s incredible,” he says.

Bay asked Woodell to improvise some of his dialogue with González. Her character is all business, emotionally distant, while Woodell’s Scott tries to lighten the mood and get to know his partner a little. The result is a terrific onscreen chemistry, and some of the funniest moments in the movie.

Woodell said another highlight of the film was getting to work, even briefly, with one of his heroes, Gyllenhaal.

“It’s always a tricky thing working with someone you admire,” he says. “You want to watch them work, and at the same time you’re having an out-of-body experience. He was in the zone and not really taking in anything other than what he was doing in front of him. At one point when we were blocking, I did get the chance to say, ‘Hey. I’m Colin.’”

Woodell said he did bond with Abdul-Mateen, who recently appeared in “Candyman” and “The Matrix Resurrections,” and is also from the Bay Area. He calls Abdul-Mateen inspirational, describing how he followed his dream from being an athlete to secretly taking classes at ACT, and even working in the Mayor’s Office for a time.

“We immediately clicked,” he says. “He just had that Bay Area vibe. When you’ve been in LA long enough, when you meet someone from the Bay Area, you just bond.”

Story by Jeffrey M. Anderson in The San Francisco Examiner