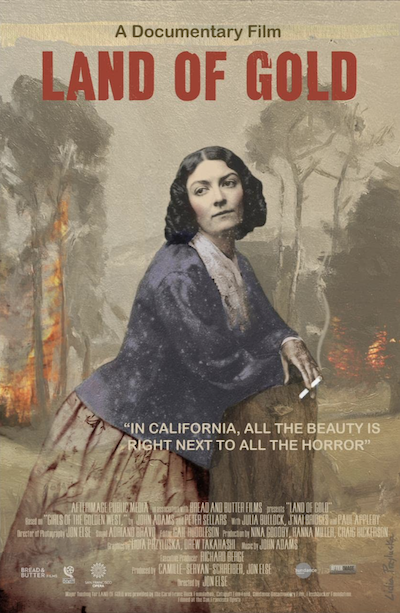 Jon Else’s new art-in-the-making film “Land of Gold,” about the creation of John Adams and Peter Sellars’ inventive Gold Rush opera, will be screened at the Castro Theatre as part of the San Francisco International Film Festival on Thursday, April 28.

But when the veteran Santa Cruz documentary filmmaker and cinematographer was first asked by composer Adams back in 2015 if he would be interested in shooting footage of rehearsals as Adams and Sellars developed "Girls of the Golden West" at the San Francisco Opera, Else recalled, “My initial answer was, ‘No thanks, the Gold Rush doesn’t interest me. I’ve been there, done that.’ ”

Else had previously made two films with Pulitzer Prize and multiple Grammy Award winner Adams, and one with Sellars, including the acclaimed behind-the-scenes doc “Wonders Are Many” about their J. Robert Oppenheimer opera production “Doctor Atomic.” And he knew how satisfying it could be to work with the two visionary theater artists on what would be their sixth collaboration.

His initial aversion, Else explained recently during a video call with The Chronicle, was due to the fact that he grew up in Gold Rush country himself, in the foothills outside Sacramento. He assumed he was fully versed in the origin stories and lore surrounding the 19th century crush of fortune seekers who descended on the area he called home.

“Those rosy myths about Western expansion, about miners and heroic pioneers didn’t really interest me,” said Else, former director (1997-2014) of the documentary program at the UC Berkeley Graduate School of Journalism.

His opinion changed dramatically when Sellars showed him a published trove of historical letters written by a Massachusetts woman named Louise Clappe, who had ventured out West with her doctor husband during the gold craze. The book “Shirley Letters From the California Mines, 1851-1852″ compiled her vivid messages home to her sister Molly describing what Else calls “a panorama of horrors.”

A far cry from the sanitized version of history Else was fed growing up (along with all other Californians until very recently), Clappe writes of the relentless violence, free-flowing alcohol and vulgarity, a public lynching, an attempted suicide, and virulent xenophobia — all witnessed within the span of 22 days.

“She was an astonishing observer of all the things we didn’t learn in high school about the Gold Rush,” said Else.

Clappe’s colorful descriptions of the crude Sierra mining camp of Rich Bar, notably her rare perspective as a woman during the overwhelmingly male gold grab, provided the narrative setting and major plot points for “Girls of the Golden West,” and her own words are sung in the libretto.

“As Americans we love sugarcoating our history,” says soprano Julia Bullock, who plays Clappe (who wrote under the pen name Dame Shirley) in the film. “And then you get down to the people who were there, and all the horror is right next to the majestic excitement.”

“Land of Gold” shows how greed in its purest, most ferocious form quickly took hold of the miners once gold started to become scarce. Barbarism quickly supplanted the glee of discovery and newfound wealth.

“As soon as the gold became harder to find, the bad behavior started,” Adams says in the film. “The next thing you know, we’re all blaming people who don’t look like us.”

Else sees the film as “loaded up with unspoken resonances between the past and present, between who we were back in 1849 and who we are now.

“Donald Trump never appears in the film, but this is my film about Donald Trump, about toxic masculinity and this toxic sense of being an entitled white man able to make up the rules for himself. That’s at the center of this opera,” Else said.

The filmmaker also weaves contemporary scenic footage of the Sierra Nevada, like massive sequoias under snowfall, creating in “Land of Gold” an entertaining portrait of a work of art being created (including cast members joking, flubbing lines and wrestling with the opera’s weighty themes) that is a dynamic, thoughtful work of art in itself.

“It’s no secret that by necessity most of the opera is not in the film,” said Else, explaining the particular challenges he faces when making a film about a massive stage production. “The opera is 3½ hours long, and there’s maybe 30 minutes of it in the film.”

“We assume that people seeing this film haven’t seen the opera (which premiered at the San Francisco Opera in 2017), but we also wanted to make a film that satisfies people who have seen the opera,” said Berkeley producer Camille Servan-Schreiber.

Else added that his extensive experience over the course of a career making films for PBS and the BBC (notably, he was series producer on “Eyes on the Prize”) “means I’ve spent my career taking difficult ideas and making them attractive and engaging for as broad an audience as possible — even someone who thinks they hate opera.”