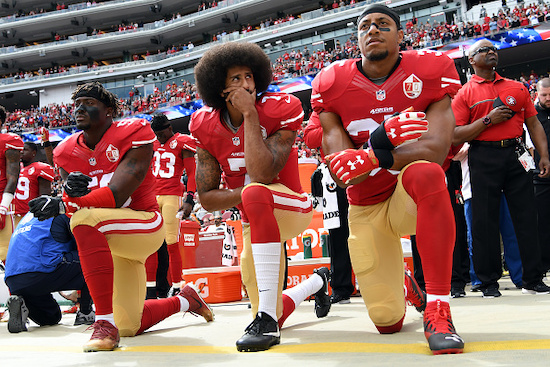 Kaepernick & America takes us back to 2016 when Colin Kaepernick's decision grew into culture war chaos.

It’s almost a certainty that the definitive retelling on Colin Kaepernick and his decision to not stand for the national anthem will not come from Kaepernick & America, a film that debuted on Wednesday night at the Tribeca Film Festival. That’s much more likely to come from another project that A) is directed by Spike Lee, B) will air on ESPN, and C) involves Kaepernick himself.

But with the doc space exploding, we’re seeing the growing trend of multiple projects on the same highly coveted topic come to fruition mostly aided by an increased amount of outlets that fund and buy documentary projects on en vogue topics.

With that mind, Kaepernick & America offers a very nimble, polished, and engaging film. It focuses almost entirely on how Kaepernick’s decision unfolded in real time and would explode to become one of the most divisive and hottest and largest culture war topics we’ve seen that’s still a cultural touchpoint for many Americans.

As a left-leaning San Francisco 49ers fan who spent most of his life in the Bay Area, I thought the film delivered and was very well executed by directors Tommy Walker and Ross Hockrow. Without the participation of Kaepernick or anyone in his camp, minimal participation from past teammates, as well as others who joined Kaepernick in not standing for the anthem, Kaepernick & America aims for a very narrow bullseye of focusing on the political and cultural implications of Kaepernick’s decision. The film does not follow anyone in real time. It offers very little new information of what transpired behind the scenes before, during, and the years after Kaepernick became a hero to many while also becoming the ultimate villain to many others.

The film takes about 25 minutes retracing Kaepernick’s upbringing and early success in the league before giving viewers a very powerful time capsule of some of the growing frustrations, tensions, and unrest that was beginning to snowball in 2016. This initial 30 minutes sets the stage for NFL Network reporter, Steve Wyche, to take the baton where he then retraces breaking the story that Kaepernick would no longer stand for the anthem. The film heavily relies on Wyche, as well as various news stories and interviews throughout, giving it a very fast pace in which the film really bursts with various footage and content despite a pretty limited new interview roster.

Wyche essentially serves as the person retracing the pin getting pulled from the grenade, and the grenade going off, in terms of this becoming a major story, and the massive amount of reactionary coverage the story got. Nate Boyer also adds a lot of perspective, retracing his experience meeting with Kaepernick and working with the quarterback to alter his anthem routine to change from sitting to kneeling.

The film spends a lot of time in the fall of 2016 as Kaepernick played his final games to hoards of booing fans, all with the backdrop of a Trump presidency run and the adoring right-wing media ecosystem that continued to devour this story and licked their lips after each serving. Where Kaepernick & America succeeds is diligently chronicling one of the messier years of our lives and viscerally reminding us how central Kaepernick’s decision played a central role in today’s gridlocked culture wars discourse.

While a critic and filmmaker audience will ding the film for limited new information and not having much new footage beyond interviews, I think most viewers interested in the topic really won’t mind or notice. I think we live in an age where there’s a lot of noise, and we forget a lot of the details and emotions of things that really weren’t that long ago and were actually quite memorable and important. Because of times we live in where notable things are often blurred in our memory, it’s nice to get a thoughtful and comprehensive retelling of a major story like this. Kaepernick & America really stays focused and succeeds here. It really shines as it unpacks the subsequent whirlwind shitshow that persists even today.

Ultimately, this film is not for everyone and is probably not going to change anyone’s mind. If you spent hours watching Fox News bash Kaepernick and flooded your social media with negative comments about him, well….this isn’t a film for you. For the folks who can stomach looking into a mirror and getting a heavy serving of America’s unique anger, grievance, and rage, strap in because you’re going to get an awful lot of it, and it’s certainly going to stay with you for some time.

Kaepernick & America is airing at Tribeca, and we’re told distribution plans are likely to be announced soon.