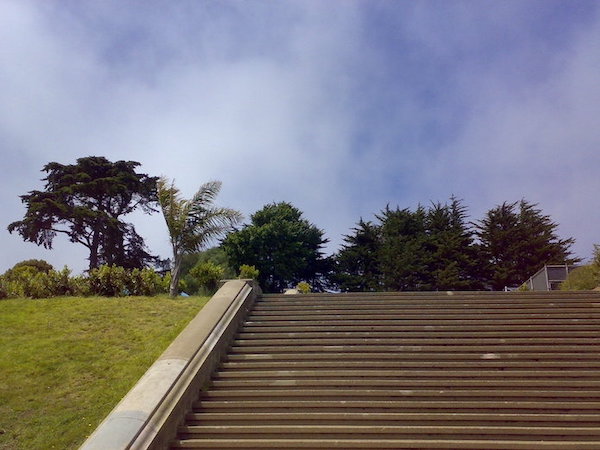 It’s one of those Bay Area urban legends high on repetition and low on details — like the Oakland port cranes inspiring “The Empire Strikes Back” (they didn’t) or Julia Child dining at Tu Lan (she did).

“The ‘What’s Up, Doc’ chase scene ruined the Alta Plaza Park staircase,” the story goes, “and you can still see the damage today!”

But unlike other enduring San Francisco myths, this one is, if anything, understated. After researching the details, I’d argue that the 1972 screwball comedy — for better or worse — left a stronger legacy than any other San Francisco film in history.

“There have been so many disaster movies filmed in San Francisco, but it took a screwball comedy to screw up our stairs,” said current San Francisco Recreation and Park Department General Manager Phil Ginsburg. “I guess it’s kind of impressive — not even ‘Godzilla,’ ‘Dirty Harry’ or ‘The Matrix’ could leave a lasting impression on park property.”

First, the movie: “What’s Up, Doc?” — set almost entirely in San Francisco — stars Barbra Streisand and Ryan O’Neal as strangers caught up in a government plot and jewel heist. It had strong buzz even as it was filming in 1971 with “Doc” director Peter Bogdanovich’s acclaimed “The Last Picture Show” arriving in San Francisco theaters that year.

“I was looking for something less heavy to direct,” Bogdanovich told Chronicle movie critic Paine Knickerbocker in August 1971. “It was to have no socially redeeming value, be funny and for the family.”

Bogdanovich shot the bulk of the “What’s Up, Doc?” San Francisco scenes in summer 1971, but came back in November just to film the chase scene, with our heroes traversing the city carrying four bags sought by multiple antagonists. The 11-minute chase reportedly took up a quarter of the film’s $6 million budget.

The chase was shot across San Francisco, with scenes in Chinatown, Washington Square, Lombard Street and finally teleporting to a pier near Mission Bay, where the four cars jump into the San Francisco Bay. One stuntman was knocked unconscious, needing to be rescued by divers.

But the controversy was atop Pacific Heights at Alta Plaza Park, where cars including a Volkswagen Bug, a 1969 Cadillac DeVille convertible and a 1969 Plymouth Belvedere taxi careened down the park’s wide stairway that spills out onto Pierce Street. The latter car seemed to do the most damage; a spray of concrete is visible in the film as the taxi’s front fender disintegrates two stairs about 10 steps up from the sidewalk.

“Peter Bogdanovich, directing ‘What’s Up, Doc?’ is in the doghouse with the Rec-Park people,” The Chronicle’s Herb Caen wrote in his column two days later. “For a chase scene Monday, he had four cars racing down the fine old steps on the Clay side of Alta Plaza, causing ‘considerable’ damage to this landmark. Warner Bros. will replace the cracked steps but they’ll never be the same (gripes a Rec-Park spokesman: ‘We were told he’d only use one car with special rubber bumpers — not four!’)”

Apparently a major studio had been allowed to drive four cars down a stairwell in a public park without a permit. By the end of the week, the controversy had reached City Hall, where Supervisor Robert H. Mendelsohn demanded public hearings about filming in San Francisco.

“San Francisco has bloomed into one of the motion picture industry’s favorite locations — and a member of the Board of Supervisors wants to know how the city is faring as a gigantic free set,” The Chronicle reported on Nov. 22, 1971.

The legacy of the “What’s Up, Doc?” fiasco was crystallized as the city stacked regulations for filming in the decade that followed. Current Rec & Park historian Christopher Pollock found records of a February 1972 meeting, where park commissioners agreed to start charging fees for film shoots.

And while the city welcomes movie crews today , there’s no more “What’s Up, Doc?” lawlessness. For the most recent big S.F. chase scene, on a runaway bus in the 2021 film “Shang-Chi and the Legend of the Ten Rings,” SFGate’s Dan Gentile reported that Disney paid San Francisco police more than $162,000 for crowd control and to supervise to set.

“What’s Up, Doc?,” released on March 24, 1972, was loved by moviegoers, but received tepid notice in San Francisco, where reviewers all noted the damage to the steps.

“After all that I wish I could tell you that ‘What’s Up, Doc?’ is as funny as most critics say it is but it isn’t,” Caen said. “Unless about a thousand shots of the S.F. Hilton make you laugh.”

As for the repairs, Caen reported that Bogdanovich and Warner Bros. got off easy — a South San Francisco man repaired the steps for just $995 charged to the studio. And it looks like nobody got their money’s worth. The cement patch doesn’t match the stairs and still stands out in 2022.

Meanwhile, the damage to Alta Plaza Park became a cautionary tale. “Mrs. Doubtfire” director Chris Columbus told The Chronicle in 1996 that he lives a few blocks from Alta Plaza Park, and thinks about the damage often.

“The staircase has never been repaired completely,” Columbus said. “It is always a reminder to me how filming can have a negative impact. It’s made me much more conscious of particular landmarks throughout San Francisco that I don’t want to destroy.”

But more than 50 years later, the damaged stairway has also become a landmark. The steps are mentioned in guidebooks and tourist sites, and the city has come to embrace the history. Last year, I attended a Twitter meetup on the steps, where we took photos next to the damage like tourists. When Heather Knight and I booked “What’s Up, Doc?” as our next Total SF Movie Night, the steps and their history became part of the promotions.

In some ways, it’s the perfect metaphor for a population that celebrates the anniversary of an earthquake and fire that destroyed half the city. The “What’s Up, Doc?” Alta Plaza Park filming was an unmitigated disaster. But it’s our unmitigated disaster — memorialized forever on the big screen.

by Peter Hartlaub of The San Francisco Chronicle