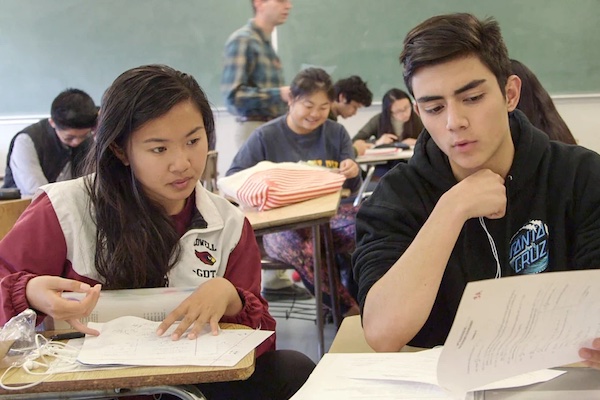 “These are the kids who can’t afford to go to private school,” director Debbie Lum said. “It is a way for someone who didn’t have access to have a way up in society.”

In a documentary on San Francisco’s rigorous Lowell High School, an Asian American student chastises his mother for saying that his father never finished high school.

“Don’t say that,” then-senior Alvan Cai says in Mandarin to his mother, Capri, off-camera before speaking to the filmmakers. “I don’t want people to think lowly of my dad or anything.”

While Asian Americans who strive for top-tier colleges are stereotyped as being from wealthy, educated families, the reality more often resembles stories like Cai’s: children of working-class immigrants who grab onto the idea of higher education as a vehicle for stability in the U.S.

It’s these students whom director Debbie Lum said she hoped to humanize in her documentary, “Try Harder!,” which made its broadcast debut Monday on PBS’s Independent Lens.

“These are the kids who can’t afford to go to private school. Families bank on that,” Lum told NBC Asian America. “It is a way for someone who didn’t have access to have a way up in society.”

The documentary, which premiered at Sundance last year, chronicles the lives of five students during the 2016-17 school year as they embark on a grueling college admissions process.