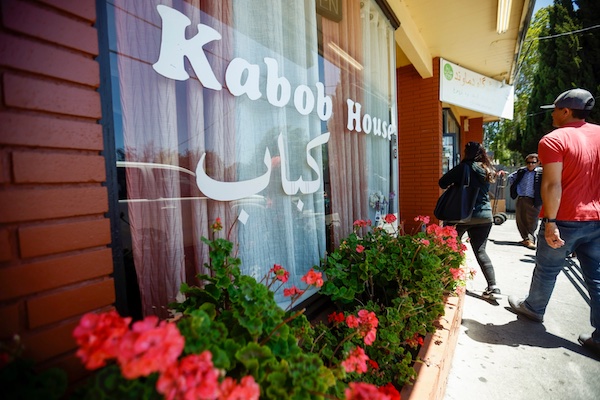 Fremont’s movie filming history stretches back to days of Charlie Chaplin, but new flick’s approach is rare because city will have a featured role

FREMONT — Since Charlie Chaplin shot “The Tramp” in Niles when silent films reigned more than 100 years ago, the movie scene here has become almost non-existent.

Though slices of several films have been shot in the city from time to time, it’s rare for a motion picture to focus so much on Fremont — until now.

This month, film crews have been shooting scenes in the city for a movie with the succinct working title “Fremont” — a fictional story that portrays slices of life in the diverse, immigration haven that is the Bay Area, particularly Fremont.

“It’s a low-budget, independent feature,” Rachael Fung, a producer with Fremont the Movie, LLC, said in an interview last week.

“It is about a woman who was a translator in Afghanistan for the U.S. troops, who has now moved to Fremont, California,” Fung said.

Many Afghan translators and others who worked with U.S. and other allied forces tried to flee Afghanistan before and after the Taliban took control of the country again last August, fearing they’d be killed.

Afghans had previously resettled in Fremont and other East Bay cities since the Soviet invasion of their country in December 1979.

The film is based on research that writer and director Babak Jalali has done about Afghan translators who have come to the United States, Fung said. The area was chosen for filming in part because of its concentration of people of Afghan descent.

Fung said the main character begins working in one of the fortune cookie factories in San Francisco.

“So it’s sort of trying to draw similarities between all the different people that are in the Bay Area, celebrating the diversity of the Bay Area. It’s a slice of life film about the area,” she said.

Fung said the filming is taking place throughout the month in Fremont and other Bay Area locations including San Francisco.

Some local businesses have already been the setting for shoots, including the Mission Peak Lodge hotel in Mission San Jose, and Dino’s Family Restaurant in Centerville, near the part of town known as “Little Kabul.”

Another shoot took place at Afghan Awasana Kabob, a small restaurant that serves homestyle Afghan dishes and breads in the Centerville area near Cabrillo, run by Shafah Arsala, and her mother and father, Wazhma Arsala and Khushal Arsala.

Khushal Arsala said he and his family are “happy and excited” about the film for two reasons.

“One, is that it’s a story about an Afghan immigrant who is struggling, and who is a new arrival. A person who is new to the country and facing challenges, and hopefully finding their way,” he said.

“And the second is that they chose this restaurant,” he said.

He said it’s good to see a project “bringing the Afghan story back into the limelight” months after the fall of Kabul and the withdrawal of U.S. troops.

“Afghanistan is becoming like a forgotten story, you know, because of the other crises in the rest of the world, Ukraine and others,” he said. “We are ignored or sidelined very quickly,” he added.

“But Afghans, we are also in solidarity with the people of Ukraine. It reminds me of the days when my family emigrated out of Afghanistan during the Soviet invasion,” he said.

“A movie, or an article, or news or anything that covers Afghanistan or Afghan issue, tells us we have not been forgotten,” he said.

“The story of immigration and settlement in Fremont is a natural fit to be filmed here locally,” Mayor Lily Mei said in a statement.

“It’s always exciting to hear about film activity in our community and the city’s permitting program was intentionally designed to help promote filming activities not only for large productions, but small ones like this,” Mei added.

Shoots earlier this month of a woman riding a bicycle and driving a car took place on some streets in Niles and nearby areas, including Niles Boulevard.

David Kiehn, who runs the Niles Essanay Silent Film Museum, which highlights the area’s role in the silent film era, said he took a stroll down the block last week to see the preparations for the filming.

“It’s nice that people are considering Fremont and actually taking advantage of some of its interesting atmosphere,” Kiehn said. “I’m interested in seeing how the film turns out when it’s finally ready.”

Arsala, of the Afghan restaurant, also said he hopes the movie will do a good job showing off the region.

“We are living in a beautiful part of the country where we all live side by side,” he said.

Fung said that is part of the film crew’s aim.

“We have chosen Fremont because we’re conscious of the diversity that exists in Fremont,” she said. “That’s something that, for our entire team, is important, for us to represent all sorts of people, both onscreen and offscreen.”