Call Me By Your Name director Luca Guadagnino’s intimate TV debut follows the messy lives of a group of teenagers, as they navigate adolescence at a US army base in northern Italy 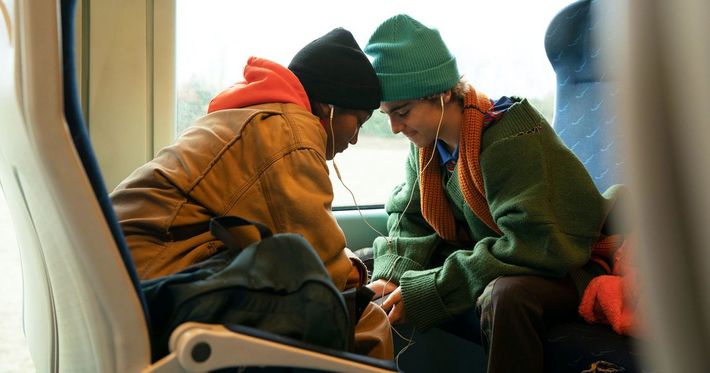 “Harper? Isn’t that a name for a boy?” An Italian man has sidled up to Harper/Caitlin at the beach. She barely registers him; she’s too busy dancing. “It’s a name for a lot of things,” she replies, dismissively.

Nothing is black and white in Luca Guadagnino’s potent, poetic coming-of-age series We Are Who We Are. Gender identity, sexuality, politics, morality – all are in constant flux, shifting like the tides of the coastal Italian town where this group of teenagers are living, on a US army base, in the run-up to Donald Trump’s presidential election win.

This is the Call Me By Your Name director’s first TV series, and the format suits him. He is a master of this sort of lush snapshot of messy youth – and with just shy of 10 hours to play with, he can go at his own languorous pace. Or perhaps more accurately, the pace of his characters; full of turmoil but free of adult responsibilities, teenagers have a habit of meandering. Guadagnino has no interest in hurrying them along.

Of the two teens at the show’s heart, 14-year-old Fraser (Jack Dylan Grazer) is the harder to like. Giving new meaning to the term military brat, he is a fashion-obsessed, perennially headphone-wearing loner whom we first meet sulking at an airport information desk swearing at his mothers over a missing bag and demanding a glug of vodka. They’re new to the base – Sarah (Chloe Sevigny) is the incoming colonel, her wife Maggie (Alice Braga) a major – so as soon as they arrive, after plunging his hand into the middle of their welcome cake, Fraser takes off to explore.

The camera bobs along behind Fraser, following his every whim as he wanders through the base. Co-cinematographer Yorick Le Saux – responsible for Little Women, High Life and Guadagnino’s 2015 feature A Bigger Splash – immerses us so fully in the perspective of his subjects that if they plunge into a pool, so too does the camera. Soon, Fraser meets the self-assured Britney (Francesca Scorsese, daughter of Martin), who in turn leads him to her group of rowdy friends – good-natured soldier Craig (Corey Knight); surly, lovelorn Sam (Ben Taylor); pious but aggressive Danny (Spence Moore II), all young and arrogant and lost. “Without friends, you’re nothing,” Britney tells Fraser as they walk to the beach, and never is that more true than when you’re a teenager. The group are sceptical, nicknaming Fraser “T-shirt” with a tone that flits between mockery and affection. Britney’s brought him with her, she tells her best friend in a stage whisper, because she’s convinced by the way he walks that he has “a big one”.

That friend is “Caitlin” Poythress, sister of Danny and girlfriend of Sam, played with deft emotional subtlety by newcomer Jordan Kristine Seamon. It is she who brings out the good in Fraser that might otherwise have laid dormant – and thank goodness, because without her stabilising presence, Fraser would have quickly become unwatchable. He spots what no one else seems to have cottoned on to – that Caitlin is rattling at the gates of her assigned gender. She tucks her hair into a cap and flirts with a local Italian girl; she doesn’t enjoy kissing her boyfriend; she answers to Caitlin but prefers to go by Harper; and she looks at her period blood like it’s an alien invading her own body. Her self-discovery is intoxicating. Fraser, wise through books and the internet rather than lived experience (he hasn’t figured out his own sexuality yet, and has only ever kissed a mirror), introduces Harper to concepts of gender fluidity and transness. He helps her shave her head and glue hair shavings to her upper lip. In one particularly intimate scene, she stands close behind him while he pees, using his body as a surrogate for the one she thinks she might want. “This is wonderful.”

The friendship is both a haven from and a strain on the pair’s complicated home lives. Harper’s father Richard (Scott Mescudi, aka the rapper Kid Cudi) is a Maga-hat-wearing Republican who seems to both love and fear his daughter. He looks at the bag of discarded hair he finds in the rubbish bin as if it's evidence of a violent crime against him. Her Nigerian mother Jenny (Faith Alabi) is attentive but downtrodden, confused by her growing attraction to Fraser’s mother Maggie. Fraser’s relationship with his mother Sarah, meanwhile, is downright disturbing. Despite being the most senior ranking officer on the base, Sarah has next to no authority when it comes to her son. In their Oedipal dynamic, she seems to be both mother and father – he sucks her finger when she cuts herself and slaps her round the face when she slices his beef too thick.

It takes a daring director to ask us to not just sympathise but empathise with a boy like Fraser. And Guadagnino is certainly that. He has an almost magical realist take on teenage life. Everything is at once lifelike and heightened, his gritty, gonzo approach punctured by freeze frames and fade-outs and fantasy sequences. Nothing is prescriptive or overtly political – the election is playing out on TVs in the background, but these teens are far too wrapped up in themselves to notice.

There are no easy answers in We Are Who We Are. Important lines are spoken over or thrown away. Heroes are also villains, and no one ends up neatly defined or labelled. The more you watch, the more that shrug of a title starts to make sense.

Article by Alexandra Pollard for the Independent.

Tags: cff, sff, siff, we are who we are, luca guadagnino, call me by your name, suspiria, miniseries, hbomax, streaming
E-mail me when people leave their comments –
Follow