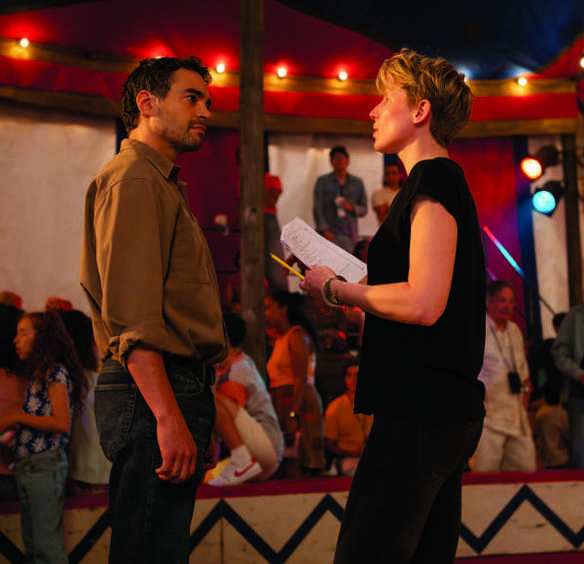 Ramón Rodríguez hasn’t exactly been taking it easy during quarantine. In addition to directing “Unity,” a short featuring two dancers in Los Angeles during the pandemic, the actor is putting the finishing touches on his script for a Latinx superhero movie and developing “Man Child,” a film he co-wrote with Rosie Perez. Whenever it’s safe to go back to set, Rodríguez will likely return to Atlanta to resume production on the upcoming untitled Fox drama series about three students who are intent on creating a shot-by-shot remake of “The Goonies.” Until then, he can be seen in Disney’s new “The One and Only Ivan,” which made its debut on Disney Plus. Rodríguez plays George, an animal keeper at a circus that sees ticket sales soar when it’s discovered that Ivan, a silverback gorilla (voiced by Sam Rockwell), knows how to sketch.

With “The One and Only Ivan,” was most of your work done against a green screen with the animals added in post? I’ve done the green-screen thing where you’re talking to a pole with a tennis ball. It’s very strange. But we were really lucky because we actually had people playing the animals. For the baby elephant, Ruby, there was this guy who would climb into this green baby elephant suit. He would start walking and moving around like an elephant. It was mind-blowing. You’d be like, “That really looks like a baby elephant,” but then you’d see him stand up on his two legs and walk away.

What’s the message of the film? I think there are several messages. The one that probably really resonated for me was the message of self-discovery. I loved that this gorilla who is living in a circus discovers he has this incredible ability of drawing and that that becomes this form of communicating. He also discovers his roots and where he’s from. I think it’s even moving the needle in regard to the treatment of animals. You can see Disney sort of changing its ways and becoming aware of what it’s done in the past and what it wants to do now moving forward. And that’s evolution; we’re hopefully evolving.

You don’t know when you’ll return to the “Goonies” project, but do you know if any of the stars from the original film, like Josh Brolin and Corey Feldman, will be making cameos? I’ve heard talk, and I think that would be fantastic. I know there’s already music that’s going to be included that are nods to the original.

Ariana Greenblatt, who plays your daughter, is also of Puerto Rican descent. What are your thoughts on Latinx representation in Hollywood today? We still have a ways to go, but it was really great to have us be a part of this and know that we’re representing. There are still misconceptions and stereotypes being perpetuated, and … it was exciting to be a part of something that we know was positive.

What is the story behind “Man Child,” which Ed Norton has already signed on to produce? I wrote a script that’s loosely based on the relationship between my dad, who lives in Puerto Rico. [It’s] a very complicated sort of relationship, and it’s come a long way. This script has actually helped me get past a lot of it — a lot of the trauma.

You’ve been working a lot during quarantine. Have you found time to do some TV bingeing? I watched “I Know This Much Is True.” Mark Ruffalo and I have the same agent, so I wrote him a note because I was so moved by his performance. It’s heartbreaking and gut-wrenching and so well executed, and deals with trauma in such a way that it feels so authentic. But that’s really heavy. So after I watched that, I watched “The Great.” It’s so much fun. I love the reimagining of history. I love the whole relationship between Catherine and Peter.