Directed by Sean Baker, the much-buzzed-about Sundance film Tangerine is now in select theaters, and No Film School spoke with co-Director of Photography Radium Cheung, about how the film was shot only with the iPhone 5s, and why that worked for this film:

Shooting with only iPhones on the Sundance hit film 'Tangerine.'

If you haven't seen it, here's the Red band trailer:

Shooting on the iPhone

By utilizing the iPhone 5s and anamorphic adapters, the Director/co-DP Sean Baker and co-DP Radium Cheung (who was shooting FX's The Americans when he got the call to shoot this film) were able to capture the film in a way that gave them maximum mobility, a unique look, and quite a bit more stealth than if they were using larger cameras. The anamorphic adapter is one of the biggest pieces of the puzzle here, and it certainly helps take the footage to another place compared to regular old mobile video (especially with the lens flares).

By using the FiLMiC Pro app, they were also able to avoid the constantly changing exposure that normally comes with shooting on a phone (though there were times in the film that focus was not locked). If you can see the film on the big screen, it's absolutely worth it not only because it's both funny and heartbreaking (and just a good film), but because it shows just how far these tools have come. The footage reminded me of digital films from the early and mid-200s, but it completely worked for the subject matter. Due to the small physical size of the iPhone, they were able to do some camera movements that were amazingly electric and would have been much harder to do with larger cameras — and it gave their characters even more energy at times.

Here are the tools they utilized to capture the images: 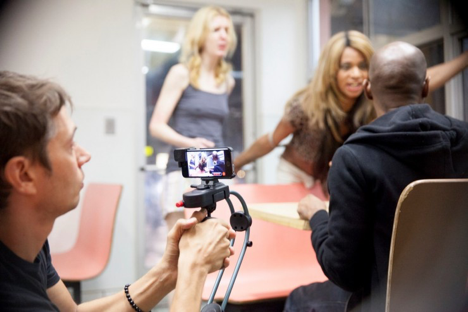 Sean recently spoke with Film Courage, and here are the first two videos in that series that go a little deeper into the conversation about shooting the film and what advantages the filmmakers had choosing the iPhone format:

Why I decided to shoot my 5th Feature on an iPhone.

If you're wondering, no, this was not a marketing ploy on the part of the filmmakers, especially since they kept it secret until after the film premiered:

Nobody knew we filmed 'Tangerine' on an iPhone

Should You Shoot Your Next Film on the iPhone?

This film, like most movies, could have been shot on any number of cameras that could have fulfilled a similar purpose, but the filmmakers chose a format that allowed them to not only put the cameras anywhere they wanted, but also let them blend into busy city sidewalks and easily shoot inside vehicles. There are a number of cameras that can accomplish this task now, but plenty of you out there probably already have an iPhone or similar camera in your pocket. That's the biggest advantage in my opinion to what they did, is that not only could their camera actually fit into a pocket, but this also let them use super small support gear.

If you're thinking of shooting on a small camera to avoid permits, that's one strategy, but the filmmakers had the correct permits, and were allowed to shoot on these locations (though if you're trying not to draw attention to yourself, a small camera like a smartphone is a great way to do that). There are definitely more forgiving cities than Los Angeles to try to shoot a movie guerilla-style, so that's something else to keep in mind.

As Baker has said, the idea for this film came a long time before they decided to shoot on the iPhone. If you're choosing a smartphone as your main camera, you should be doing it because you actually want that look for your film and for your story. It will become less novel as we see more films shot on smartphones, so it not only has to fit the specific aesthetic quality that you're going for, but it also has to be a better choice than some of the small and cheap cameras out there — both in terms of controlling the image on set, but also making it easier on yourself in post. As Baker says in the interview above, he likely wouldn't shoot on a phone again. It seems like shooting on a phone would make your life easier, but there are plenty of complications that come from choosing this format, especially not being able to change focus during the shot (and if you don't lock focus, you're bound to get the camera hunting for focus in the middle of the shot).

Article By: Joe Marine for NoFilmSchool.