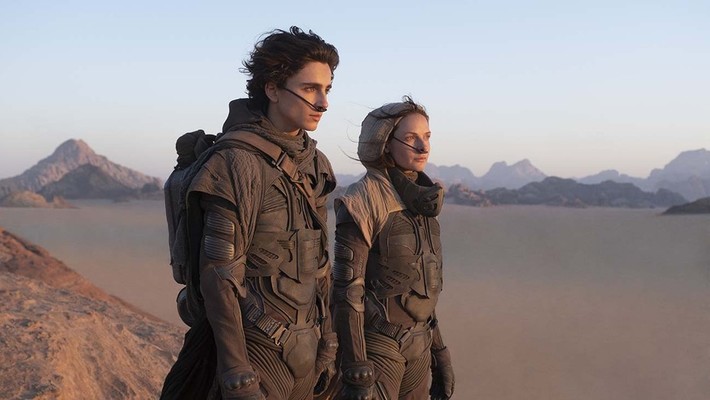 The property, which has a new trailer out, has had something of a great chasing windmills saga in Hollywood.

“Fear is the mind-killer. This morning Warner Bros. released the highly anticipated first trailer for Denis Villeneuve’s Dune. Based on the epic and groundbreaking 1965 novel by Frank Herbert, Dune explores the intersection of fate, politics, religion, ecology, and war amidst the backdrop of the planet Arrakis, colloquially known as Dune.

Boasting an absolutely stacked cast that includes Timothee Chalamet, Zendaya, Rebecca Ferguson, Oscar Isaac, Jason Momoa, Josh Brolin, Dave Bautista, Stellan Skarsgard, Javier Bardem, David Dastmalchian, Sharon Duncan-Brewster, and Charlotte Rampling, Dune is, for many science fiction and film fans, one of the most anticipated releases of the year. Aside from the ever real chance of rescheduling due to COVID-19, Dune seems poised to break out as the next big science-fiction franchise, that is, if it can garner the same investment from general audiences that it has from sci-fi fans over the decades.

Dune has had something of a great chasing windmills saga in Hollywood. Many have tried and failed to find the rhythm in Herbert’s expansive novel which offers an omnipresent look at each of its characters, shifting perspectives even within paragraphs. Coalescing past, present, and future, Dune feels at times like a Biblical document. And in some ways, given its influence on everything from Star Wars, Star Trek, Nausicaa of the Valley of the Wind (1984), Stargate (1994), and even Tremors (1990), Dune is something of a sacred text in the realm of science fiction. It’s no wonder then that Hollywood has had such difficulty trying to adapt the story.

Attempts to make a film adaptation first began in 1971, with Planet of the Apes producer Arthur P. Jacobs optioning the rights, though he died two years later, before the script was completed. In 1974, the most famous failed attempt began with Chilean-French filmmaker Alejandro Jodorowsky envisioning a 10-hour film starring Salvador Dali, Orson Welles, and Mick Jagger. Artists Moebius and H.R. Giger were hired to design Herbert’s world for film, with Dan O’Bannon heading the special effects department. The storied failure of this adaptation to come to fruition is detailed in Frank Pavich’s documentary Jodorowsky’s Dune (2013).

Out of Jordorowsky’s failed adaptation, Alien (1979) was born through the collaboration between O’Bannon and Giger. The success of Alien led Dino De Laurentiis to approach Ridley Scott to direct, which he planned to make before Blade Runner (1982). When Scott became overwhelmed by the work involved, David Lynch entered the picture and the first adaptation of Dune was actually made in 1984. There are some, including Lynch, himself, who believe the world would have been better off without his much-criticized box-office failure. Much like Alien being born of Jodorowsky’s Dune, Lynch’s Dune created an ongoing partnership between the filmmaker and Kyle MacLachlan. That’s right, Dune also gave us Twin Peaks.

It would be 18 years until Dune returned to screens again, this time on the television side with the Sci-Fi Channel miniseries, Frank Herbert’s Dune, directed by John Harrison. That adaptation did well enough to receive a sequel in 2003, Frank Herbert’s Children of Dune, starring an early career James McAvoy. While largely considered to be a faithful adaptation, Harrison’s Dune is noted to be very much a television movie, lacking the spectacle and prestige of a feature film adaptation.

Villeneuve looks to have captured all of that spectacle and prestige and then some in telling the story of prophesized messiah Paul Atreides (Chalamet) and his coming of age on Arrakis. His Dune looks sweeping and majestic, far closer to the epics like Lawrence of Arabia (1962) and Ran (1985) than the pulp spectacles of Star Wars and Star Trek. Even in the presence of desert sword fights and giant sandworms, there is a grandiose maturity found in the trailer for Villeneuve’s film, heightened by Hans Zimmer’s score and a rendition of Pink Floyd’s “Eclipse.” Dune clearly sets itself apart in the blockbuster realm, but in a space dominated by Disney and superheroes, hopefully the scale of its world-building and cast will be enough to pull audiences into its gravitation.

Villeneuve, who has quickly risen as a cinephile favorite, follows attempts by Peter Berg and Pierre Morel to adapt Dune for the big-screen. The filmmaker, well adept at melding narrative structures with visionary filmmaking techniques is tackling the puzzle of Dune by breaking the novel into a two-part film saga, a fearless ambition if ever there was one. Though he has said that Dune will feel like a complete film, Villeneuve has noted that it is an adaptation of the first half of Herbert’s book. For long-time fans who finally have the prospect of the Dune adaptation they always dreamed of within reach, this prospect of an unmade second-half is worthy of some anxiety, considering that Villeneuve did not film both features simultaneously a la Peter Jackson’s Lord of the Rings trilogy.

Villeneuve’s previous film, Blade Runner 2049, considered to be one of the best modern sci-fi films, didn’t exactly light up the box office — $260.5 million on a $185 million budget. While Dune is the template and inspiration for so many beloved properties, it also has a chance of running into the same problem that Andrew Stanton’s John Carter (2012), based on Edgar Rice Burroughs Barsoom series, itself a precursor to Dune, ran into. When so much has been borrowed from and inspired by a classic text, it can be difficult for audiences to see an adaptation of it as something new. But of course, the same could be said for Lord of the Rings, to which Dune has been compared in scope, and we all know how well that worked out.

Warner Bros. is certainly taking all the right steps to position Dune as something new, and digestible for those unfamiliar with the world, providing a cast Q&A with Stephen Colbert before the debut of the trailer. Warners also has big hopes for the property as a franchise, with Dune: The Sisterhood, a spin-off series, in the works at HBO Max. With no Star Wars or Avatar in its line of sight this holiday season, Dune certainly had the perfect release date. Now, with audience habits in flux and box office entirely unpredictable, that placement is a little less perfect. But Dune has shown a remarkable resilience over the decades, and hopefully, whether it makes its December release date or we have to wait a little while longer, Villeneuve’s passion will be matched by that of audiences. Dune has the potential to change the scope of our science fiction spectacles, we just have to embrace it.

Article by: Richard Newby for the Hollywood Reporter.