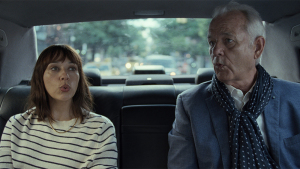 Sofia Coppola’s “On the Rocks,” centered on a father/daughter duo played by Rashida Jones and Bill Murray, will world premiere at the New York Film Festival as part of its new spotlight section.

“On the Rocks” will be released in October by A24 and Apple TV Plus. Coppola and Murray last collaborated on 2003’s “Lost in Translation,” which earned Coppola an Academy Award for original screenplay and garnered Murray an acting nomination.

The spotlight lineup for the 58th New York Film Festival, which opens on Sept. 17 with Steve McQueen’s “Lovers Rock” and closes on Oct. 11, showcases sneak previews, gala events, screenings with live elements, and other special evenings.

The spotlight section is programmed by festival director Eugene Hernandez and Dennis Lim as part of a reimagined New York Film Festival structure. The festival’s offerings have been streamlined into five sections, including the previously announced main slate, currents and revivals sections. The talks section offerings will be announced in the coming weeks.

“Prior to the pandemic, Dennis Lim and I spent time talking with each other and the Film at Lincoln Center staff about how we might reshape and focus the New York Film Festival,” Hernandez said in a statement. “We agreed that among the annual highlights are those special, one-of-a- kind events that unveil an anticipated new film by a well-known filmmaker, dig deeper into a topic or theme with a substantive conversation, showcase something new or unexpected, and even have some fun!”

“This is what we’re aiming to do with our new Spotlight section, which this year features cinema’s brightest names (Spike! Pedro! Sofia! Tilda! Orson!), but also explores big topics and important ideas that our society is grappling with today: voter suppression and police brutality,” he concluded. “Even though we’ll gather digitally and at drive-ins this year, rather than en masse at Lincoln Center, we hope our first Spotlight section will engage, enlighten, and entertain.”

Article by: Dave McNary for Variety.