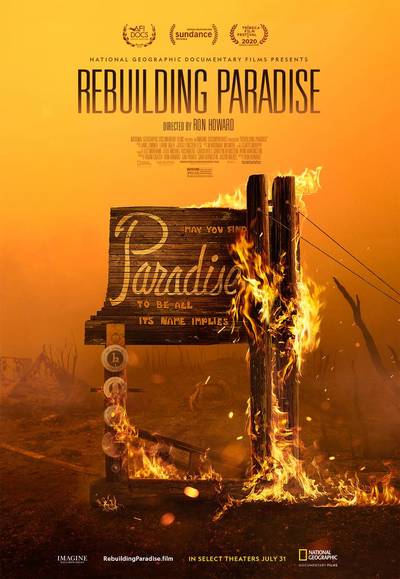 Director Ron Howard may be a Hollywood icon, but it was his ties to Northern California that convinced him to make “Rebuilding Paradise,” a documentary detailing the 2018 Camp Fire and the recovery process that followed. The movie – distributed by National Geographic Documentary Films – will be available to stream beginning Friday, July 31.

“I followed the Carr Fire in Redding,” Howard said during a phone interview this week. “I have a lot of relatives up there, and then the Camp Fire hit Paradise. That’s a place I’ve been also. … Like many things, once you relate to the horrific images you’re seeing, it just resonates more deeply and it really stirred my curiosity.”

“Rebuilding Paradise” spends significant time detailing the events of Nov. 8, when the Camp Fire swept through Paradise, destroying much of the town and becoming the most destructive wildfire in California history, but Howard said he was most interested in what came after.

“How is that beautiful, small community going to come back from this?” he asked himself. “They’re not the seat of industry. They don’t have a big tourist business going on. What’s going to happen to that terrific little town?” Howard took these questions to the documentary team at Imagine Entertainment, a company he and producer Brian Grazer founded in 1985, and everyone agreed there was a film to be made.

“We sent a team immediately, and I followed a few days after that,” Howard said. “Within a couple of weeks, we were engaged in making this movie, just as big media was moving out. It was no longer a headline story, but we began tackling the story I was curious about, which is ‘What happens after the cameras leave.’”

“We weren’t fully embedded,” Howard said, “but we were coming in – myself, the producers – on a regular basis two or three times a month.”

Howard said he believes it was this long-term commitment that convinced the citizenry he could be trusted. At first, he said, there were people who – numbed by the experience – didn’t want to talk, but he and his crews received a mostly warm welcome.

“This is not made with an agenda in mind or a premise to be proven,” Howard said. “It’s really just about observing and sharing and letting people take from the film that which resonates with them. Fortunately, and legitimately, it turned out to be a very positive, inspiring story in a lot of ways.” 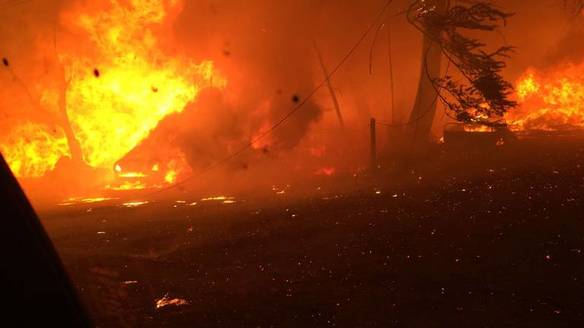 Howard chose to present the film in cinema verité style. Although linear in nature, the progression of events is related solely through gathered footage and interviews. There is no narrator who ties the pieces together, in part because Howard believes that belongs in films trying to prove a thesis. He acknowledges that the recovery process has been heavily politicized, but he doesn’t consider his film political.

“It certainly deals with politics because everybody involved in something like this suddenly finds themselves face to face with the government and very likely needing the government in ways they never imagined they would,” Howard said. “I wasn’t interested in commenting on any of this. I just wanted to let people know and understand and empathize with the aftermath of one of these things.”

Howard is best known for his feature films, including “Backdraft” (1991), “Apollo 13” (1995), “A Beautiful Mind” (2001), “Frost/Nixon” (2008) and “Rush” (2013). But – increasingly – he has been drawn to documentaries, including pieces he has created that look at The Beatles and opera singer Luciano Pavarotti. When the Camp Fire struck, Howard said, he saw the opportunity to make something more personal. He says documentary filmmaking is different than a carefully planned, scripted feature, but he also sees overlap.

“Once you get to the editing room, the process is very similar,” he said. “Part of the promise for audiences is that you are going to really fully explore this. You want it to be entertaining, you want it to be engrossing, funny when it can be funny, emotional when it is emotional, all of those things.”

One of the most impactful moments of “Rebuilding Paradise” comes at the beginning, as Howard and his crew detail the fire and evacuation process. In this segment, viewers watch as everyone from first responders to citizens come face to face with the flames.

“It wound up being very cinematic and very, very powerful,” Howard said. “I don’t think we would have guessed quite how potent it would be or that it would be eight and a half minutes long, but it’s a sequence that I think means a lot to the movie.”

“Rebuilding Paradise” arrives with built-in interest for those who live in Northern California and watched the Camp Fire unfold, but Howard believes his film will also appeal to people far outside the region.

“I think that we all know somebody … who has endured a storm or a fire or an illness or injuries or death or social upheaval of some sort,” he said. “I think this is a period of struggle and transformation, and a lot of people are feeling that the rug is getting pulled out from under them. I think that there’s a lot to learn by following the stories of these individuals in Paradise.”

Article by: Forrest Hartman for the Sacramento Bee.