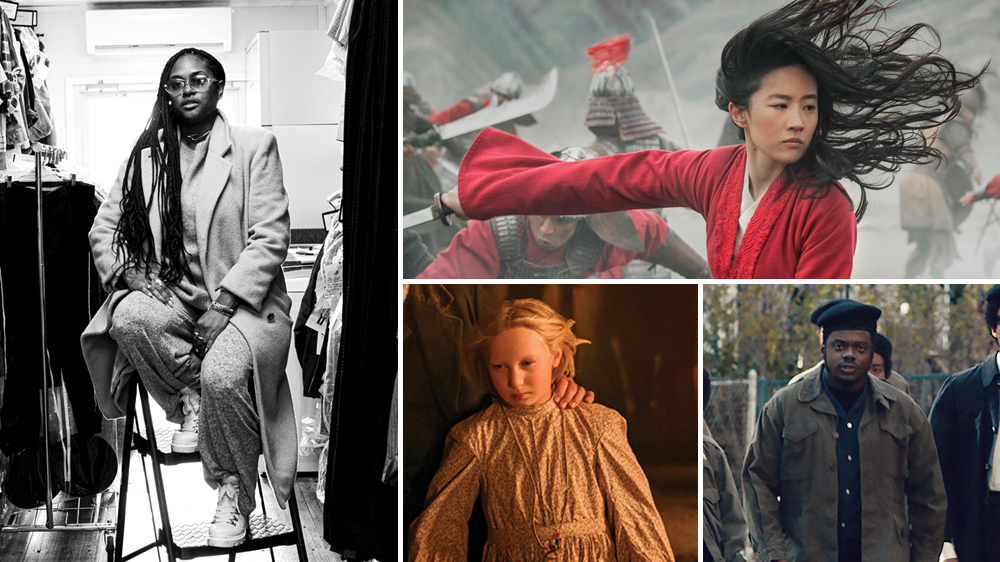 The artisans behind some of this year’s films were tasked with creating a myriad of stunts, regardless of century or setting. While stunt actors execute the physicalities in a script, it’s not without support from other departments, including costumes. A costume may be wonderful, but unless it can withstand the necessary action sequences as well, it just won’t work.

For Disney’s live action “Mulan,” costume designer Bina Daigeler had to adapt design and corresponding textiles. Stunt versions of Mulan’s (Yifei Liu) leather boots were actually Stella McCartney sneakers in disguise. “I saw the sneakers on a weekend,” says Daigeler, who “bought the sneakers [and had the team] wrap the leather around them.”

It wasn’t just the footwear that had to be adapted for stunts. Daigeler worked closely with Weta, the New Zealand-based VFX, design and fabrication powerhouse, to build the elaborate warrior armor.

The armor is generally a painted leather with each section hand-stitched together using leather laces. Dressing the actors daily involved a two-person team specially trained in tying sailors’ knots, the only way to keep the material from coming untied mid-scene.

But while the leather was great, it didn’t always work for the action sequences, so approximately six different versions were required. “One was for the horse riding, another one was for underwater,” says Daigeler. “There were a lot of different types of armor for the different kinds of situations, with different kinds of materials and weights.”

Other adaptations led to shortening and removing some of the armored plates for ease of horseback riding in those particular scenes.

Eagle-eyed audiences may confuse these safety swaps for mistakes, though. Costume designer Mark Bridges received one such letter about his work on 2007’s “There Will Be Blood.” Someone wrote him, criticizing the design of Daniel Day-Lewis’ sneaker sole — a shoe bottom that appeared on screen for mere seconds during a campfire scene. It was made from a material that hadn’t yet been invented in the early 1900s when the film took place.

“I wrote them back and said simply that sometimes an actor’s safety outweighs the historical moment in time,” Bridges says. “I do take that with a grain of salt, but I do also take it into consideration in a way. We don’t want to have some of our techniques showing which might take somebody out of the scene.”

It’s that level of attention to detail that drives many costume designers, including Bridges, a two-time Oscar-winner. More recently, Bridges worked on “News of the World” starring Tom Hanks and set in 1870 Texas.

Tailoring for stunt actors involves as much consideration as costuming the leads. “I take it as a challenge to make it as seamless as possible,” says Bridges, who asks himself: Are these sleeve lengths the same? Are we seeing the same amount of shirt cuffs? Are the boots hitting at the same place even though there’s a little bit of height difference?

Details including sizing the stunt actor’s head accurately for a hat can also potentially ruin a take if not done well — it won’t work if a hat flies off in the middle of an elaborate stunt set-up, Bridges says.

Bridges always appreciates the transformation that takes place when a stunt double steps in for work. “It’s always shocking to see a stunt person come out of the make-up trailer and how they have [transformed] a 30-year-old man and made him look like Tom’s character,” says Bridges. “It’s always quite good.”

Prep time and budget can also affect how stunt costumes are sourced and adapted. “Judas and the Black Messiah” costume designer Charlese Antoinette Jones was tasked with creating the fashions of late-1960s Chicago.

“Most of our stunt work was shootouts,” says Jones, “so we had to squib things, which means clothing was going to be destroyed [by the small explosives stocked with movie blood to simulate gun shots], and most of our clothing was vintage. We had to find a work-around.”

Jones mixed vintage and modern pieces for the action sequences so the silhouettes and color were accurate to the period. The less-expensive modern pieces were the ones that wound up getting destroyed.

The special-effects teams go through a negotiation with the designer to get enough multiples for prepping the squibs. The fabric is scored to ease the explosive process, and the team has enough on hand to anticipate as many takes as the director may need. All the clothes come out of Jones’ budget, so more back-ups for them means fewer resources for her.

And, since the squibbed clothes can be lumpy, Jones must pay particular attention to the types of fabric she uses for costumes in those scenes. “A lot of it is making sure that it doesn’t look bulky, [so] the fabric needs to have a little bit of weight to it.”

Watching the fabric during the shootout scenes, in particular ,reveals more mid- and heavy-weight knits. Ashton Sanders, who plays Jimmy Palmer, was costumed in black specifically “to help us with hiding the squibs,” says Jones. “Because he is so thin and it would have really shown up bulky on him, being in a black shirt was really helpful.”

Depending on how the sequences are shot, actors will typically change into the squib-prepped costume pieces only for that particular part of the scene, always wearing a special compression layer underneath so that the small explosives never touch skin for fear of burns. After all, “it is a mechanism that’s exploding,” Jones notes.

In a shootout-heavy film, there’s an additional consideration when it comes to budget: “the blood had to be able to wash out,” says Jones of the fabrics she chose, and “luckily, a lot of the stunt blood does now.”

Another area where modern-meets-period is in the shoes. All the vintage styles, originally with leather tread, were resoled with rubber. It was important for safety, not just in the action sequences but also because of the real-life Cleveland weather in which the production was immersed.

The pre-emptive updating was useful in other ways, too. “There were so many moments that things happened and it was heated,” says Jones. “There might’ve been an argument scripted, but then they actually got physical with each other.” So having safe shoes all the time meant the actors could truly be in the moment.

During one scene, LaKeith Stanfield, playing Bill O’Neal, jumped over a car and, says Jones, “that was something we didn’t even know he was really going to do!”

While period-specific research may guide the costume designers in their craft, it’s taking note of every detail from hat to heel that allow them to blur the space between dialogue and stunt.
Adds Jones: “We had to get super creative.”

Article by: Zoe Hewitt for Variety