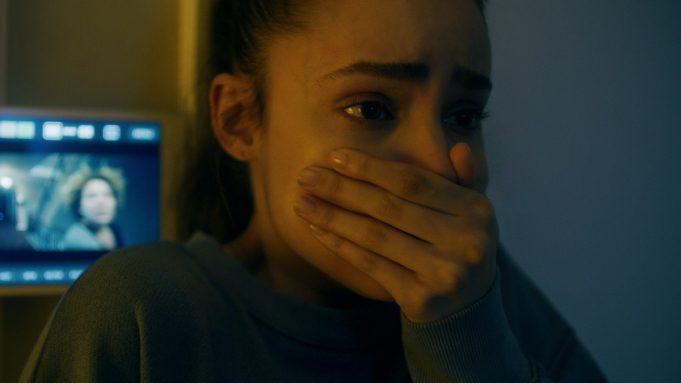 A mutated strand of coronavirus called COVID-23 wreaks havoc on the world in “Songbird,” produced by Michael Bay.

On Thursday, the first trailer for the pandemic thriller showed a world trapped in lockdown for four years, reaching 8.4 million deaths in a single year. The movie takes place in 2024 and stars K.J. Apa and Sofia Carson, who play a couple separated by the pandemic and living under martial law. Apa’s character claims to be immune from the virus, which may help him as he searches for his girlfriend, who is forced to evacuate her apartment after her neighbor contracts the virus.

“It’s a dystopian, scary world, but it’s a romantic movie about two people who want to be together, but they can’t,” director Adam Mason told Entertainment Weekly. “It’s ‘Romeo and Juliet,’ but they’re separated by her front door and by the virus.”

On shooting the film about a pandemic during a pandemic, Mason said the limitations set by COVID-19 guidelines reminded him of prior sets he had worked on. “I normally do the lighting and the camera work myself,” he said. “So, I’m used to being very close to the actors and filming in this very intimate way that was perfectly suited to filming during the rules and regulations of the lockdown. I found it incredibly liberating because everyone was just so happy to be involved.”