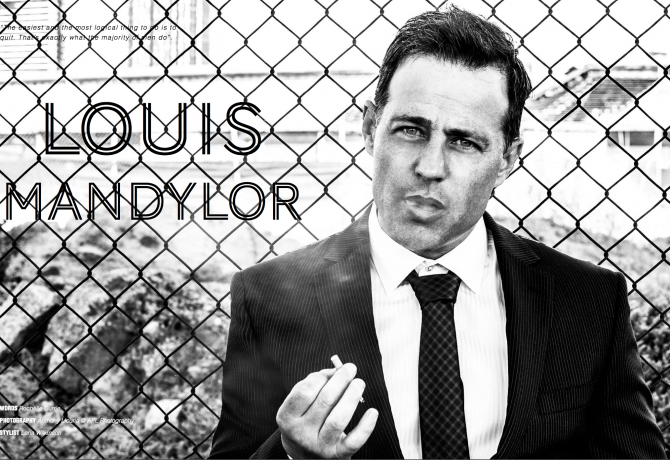 HITTING THE ROAD with LOUIS MANDYLOR

Louis Mandylor is one great actor! Beyond that he's also a SUPER BUSINESS MAN who just won the coveted INNOVATIVE VISIONS award at the SACRAMENTO INTERNATIONAL FILM FESTIVAL for his new film which is marrying film with online commerce in a very exciting way.

For those who missed it, ROADHOUSE is a fantastic "noirish" short film starring and directed by Mr. Mandylor about a road warrior and his new found mistress. Additionally, the film also employs some fantastic new technology. Featured as part of our "FASHION ON FILM" program for its obvious fashion forward nature, ROADHOUSE could have easily been a part of our DIGITAL ODYSSEY for its amazing use of technology. This technology is making ROADHOUSE and future films like it vehicles for commerce in a way never before imagined.

Louis has promised to come back to Sacramento and spill the beans on how he did it for a future CFF meeting. Meanwhile, we caught up with this actor/director turned media mogul to get a sneak peek into his world:

CFF: We know you as an actor but your new film shows you as a Fashion Icon as well. Do you have any Fashion Background?
LM: HA well yes growing up in the club scene in Melbourne and loving magazines and fashion most my life, maybe yes!!!!
CFF: Tell us about your lovely co-star. What is her name? How did you find her? How can we see her again?
LM: Monica Clark, we had a scout in Melbourne and Monica killed it! first time acting, successful model who is crossing over...expect more from her!!
CFF:  The connection of fashion and commerce through film is fascinating. Tell us how you came up with the concept?
LM: some how just did, but there is another layer that we cant share that will be in the next campaign, its the future, online, online shopping entertainment etc.  So we created a short film for this advertising clothing company (ROAD house), and they are now cutting into a bunch of commercial spots!!

CFF: We presented you with our "Innovative Visions" Award at the Sacramento Film Festival because your film displayed a new technology. For the lay person, tell us how this technology works and how it can revolutionize online commerce?
LM:   Well let's just say sales and entertainment are coming together... As always, its about finding a niech' that works and is fulfilling creatively! Soon we will be scouting or surfing the net and if we see a jacket or some glasses etc we pause, scroll and bam!! Theres a bubble that gives all info stores sizes etc...nice yes?! and u get to see Monica!
CFF: We were very impressed with your film. What is next for Louis Mandylor and will we see any new films that employ this innovative mix of commerce and story telling?
LM:  thanx much for the award and enjoying it..Well we are planning on another one yes, and like i said now we have momentum and some amazing ideas technology wise, fx wise, etc...  It's on!! I have some nice inde films in post, "DAYZEND-HUNTED"- and a few more I directed  coming soon!!! I am blessed to be making films in Hollywood!!

Catch Louis Mandylor really soon at a CFF meeting...or see him in his next big screen adventure!