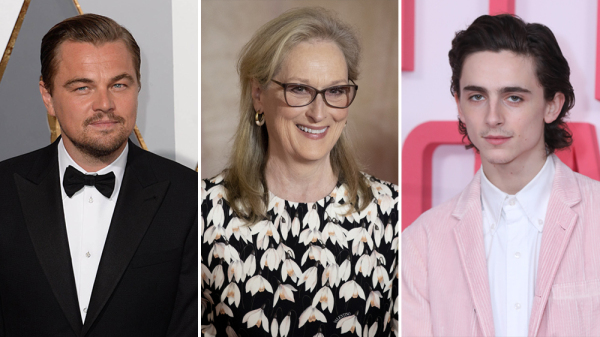 Leonardo DiCaprio, Meryl Streep and Timothee Chalamet will join Jennifer Lawrence in the star-studded cast of “Don’t Look Up,” a new Netflix comedy from Adam McKay.

Jonah Hill and Himesh Patel will also star, along with Ariana Grande, Kid Cudi and Matthew Perry. As previously announced, Cate Blanchett and Rob Morgan are part of the cast.

McKay, the filmmaker behind “Step Brothers,” “Anchorman,” “Talladega Nights” and “The Big Short,” wrote and directed “Don’t Look Up,” which follows two low-level astronomers who embark on a media tour to warn mankind of an impending asteroid that could destroy the planet. Lawrence and DiCaprio are expected to play the two astronomers, but Netflix would not confirm.

The movie is scheduled to start filming before the end of the year.

Ahead of “Don’t Look Up,” DiCaprio is starring in Martin Scorsese’s “Killers of the Flower Moon” adaptation. Streep has another Netflix film, Ryan Murphy’s “The Prom,” up next, along with Steven Soderbergh’s HBO Max comedy “Let Them All Talk.” Chalamet, who previously starred with Streep in Greta Gerwig’s “Little Women” remake, has “Dune,” “The French Dispatch” and James Mangold’s Bob Dylan biopic “Going Electric” on deck. Patel, the breakout of Universal’s musical rom-com “Yesterday,” recently appeared in Christopher Nolan’s “Tenet.”

Article by: Rebecca Rubin for Variety