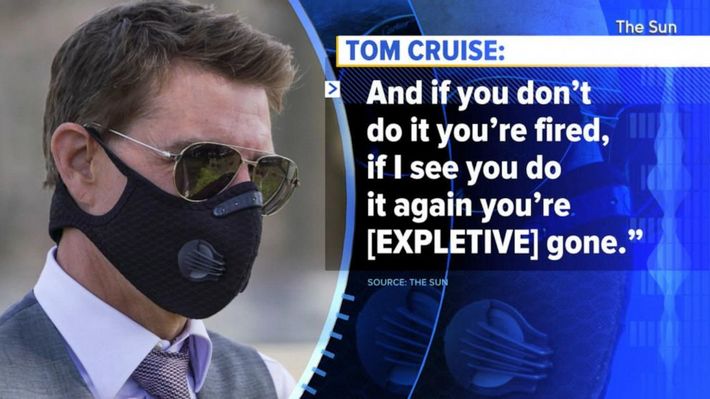 The leaked audio has elicited conflicting opinions about the star's behavior.

The recent angry, curse-filled rant by Tom Cruise may have made international headlines eliciting conflicting opinions about his behavior, but late night talk show hosts in the U.S. took it easy on the actor, mostly agreeing with his message, albeit admitting it was intense.

Audio leaked this week of the star ripping his Mission: Impossible 7 crew for apparently not following proper COVID-19 safety procedures; with some members of the set allegedly not standing more than 6 feet apart. "I don’t ever want to see it again, ever! And if you don’t do it you’re fired! If I see you do it again you’re fucking gone!" Cruise yells among other F-bombs and threats of termination in the audio. Cruise has yet to address the secretly taped rant.

Tonight Show host Jimmy Fallon went particularly easy on Cruise, joking more about how he should have been running the nation's response to pandemic from the start. "If Tom Cruise was working in the White House, we could have had the vaccine back in April," Fallon quipped. "For the nine months, that's pretty much how Dr. [Anthony] Fauci has felt on the inside. What's amazing is when Tom delivered that rant, he was hanging off a 163-story building."

Daily Show host Trevor Noah wholeheartedly agreed with Cruise, but joked about the intense delivery. "Now, some people are saying that this is a bad look for Tom Cruise, but I disagree. Yeah, he's mad, but it's for a good cause. It's like getting recorded screaming, 'You guys are in big trouble if we don't get these toys to the Children's Hospital! I want to see happy kids or you'll never work in this town again!' You're angry, but for the right reason. This should teach people just how real this corona shit is because remember, Tom Cruise is not scared of anything. So the fact that he is worried about COVID is a reminder that no one is immune from this virus."

Late Late Show host James Corden mostly agreed with the star's point and said it got him "fired up" about the issue. "I was like, 'Yes, great!' He starts talking about how people are going to lose their job if this film shuts down. Tom Cruise is the tough, but fair stepdad we all need right now. You know we are living in strange times when the most dangerous stunt on the set of Mission: Impossible is when a crewmember gave someone a high-five."

The Late Show With Stephen Colbert went a different direction with the topic, addressing the situation by dubbing Cruise's angry, curse-filled rant over the Santa Claus character in the 1964 claymation classic, Rudolph the Red-Nosed Reindeer. The way in which it is done makes it appear as though Santa is ripping into his elves for not being safe while preparing his sleigh for Christmas.

Article by: Ryan Parker for the Hollywood Reporter.