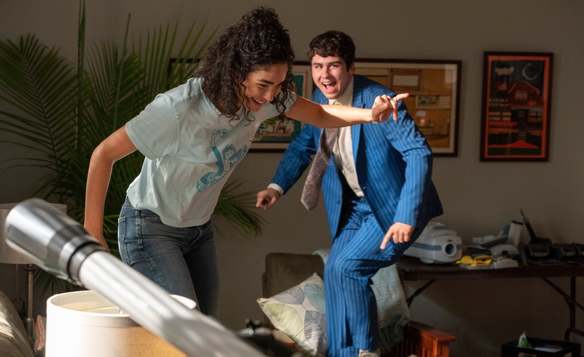 The young actor draws upon his personal experience with autism while playing one of the lead roles in a new digital television show.

The new music-filled series “Little Voice,” which debuted on Apple TV+ earlier this month, is a comforting antidote to the hectic 24-hour news cycle set in a pre-COVID New York City. While the show may center around the gifted but self-doubting songstress Bess, one of the show’s real breakout stars is Kevin Valdez, who plays the lead character’s brother, Louie — an aspiring Broadway actor who lives in a group home for those on the autism spectrum.

Besides “Little Voice” marking Valdez’s first role on television, playing the character of Louie is especially meaningful to the actor, who was also diagnosed with autism at the age of 22 months. His character is unflinchingly outspoken with an affinity for all things musical and Broadway, a passion shared by Valdez himself, who discovered his love for acting early.

At the young age of 14, Valdez got his first acting gig in Cornerstone Community Church’s theatre production of “Cinderella Kids,” going on to appear in shows like "Seussical Jr." and "The Lion, the Witch, and the Wardrobe."

After catching the first few episodes of “Little Voice,” whose launch was perfectly timed with New York’s Disability Pride Month, we virtually sat down to chat with the budding actor to hear more about his role on the show, his thoughts on neuro-inclusivity and what has been inspiring him this year.

I had two friends from elementary school that had roles in a play at Cornerstone Community Church in Manteca [,Calif.], and that pretty much sparked my interest in becoming an actor. After that, I had a part in the next play the church had two years later. I like pretending to be a person that I’m not, so that makes it pretty interesting.

In “Little Voice,” Louie is Bess’ older brother that is on the autism spectrum and lives in a group home with a few roommates. He’s obsessed with Broadway and finds himself mesmerized by his interests. It really means a lot to me playing somebody with autism like myself because there are some instances where I sort of act like Louie in real life and I can relate a lot to what he has to go through. But we’re all different, and that includes people with autism and I hope that this realistic portrayal can help spread awareness.

3. Why do you think it is important that actors with disorders and disabilities, both developmental and physical, are given opportunities to play roles that mirror those disorders and disabilities (vs. able bodied actors playing those with physical disabilities, for example)?
Each person has their own special talent that is hidden within themselves. Once everybody figures that out, they start to play an important role in society. It’s also because I think they make potential performances more realistic to others.

Those with disabilities are people too that can do normal chores like other people can and they should have their voices heard just like everybody else.

Besides my parents, I think some of the biggest Agents of Change are among Temple Grandin, who helps educate others with her perspective of how people think with autism, Hester Wagner, the program director of Futures Explored, which specializes in giving out potential job opportunities to those with disabilities, for attracting me to this role, and Joey Travolta, the founder of Inclusion Films, for creating a company that calls out for the special talents of people with disabilities.

There’s one film that has recently attracted me closer to film, and that’s Ford v Ferrari, since I’m a fan of auto racing, particularly NASCAR. I like the underdog story that was put into the film, and the main key there is that you should never give up and keep on pushing to something you’re passionate about.

I think I speak for the world when I say that I want to change the state the current coronavirus pandemic has brought the world in right now. I hate the site of people getting sick, losing their jobs and sometimes succumbing to the disease, and I wish that life will get back to the way it was very soon.

Article written by Austa Somivichian-Clausen for The Hill.