The Iron Man of Fashion

A Peek Behind the Suit of the #1

Film in the World (no, not that suit)

Intrepid CFF Correspondent/Agent of S.H.I.E.L.D. Kimberly Mims and I recently touched down for Bay Fashion's incredible show at the Palace in San Francisco. Aside from the fact that the show featured hot cars, two Sacramento designers (including one of my favorites, Maisha Bahati),

and beside the fact that Kim's daughter was a model (was I supposed to say that Kim?), the show was on fire for one additional, excellent reason, the Iron Man of Fashion.

That's right, the program featured the very first ever runway show for none other than Tony Stark's tailor himself, David August. "David August suits are sexy, savvy and sophisticated, but this spring/summer collection is all about the pants. Chic floral custom capris are the latest offering in the David August design arsenal. The metrosexual man-pants push the cusp of unconventional coolness." So said Agent Kimmy as she surveyed the scene.

After meeting David and seeing his amazing designs I must say he definitely pushes boundaries. Almost more fascinating than the clothes was how Mr. August could have gotten so far in this industry without ever doing a runway show! David told me that his suits are all one offs. He really

designs for himself 1st, literally creating each suit to fit him. When friends like Robert Downey Jr come-a-callin he creates the magic for them, individually.

This blew me away. Typically someone with a name like David August is creating a line you might find at Macy's or Nordstrom's. Not so here. David is truly a renaissance man. He is clearly more in love with the process than with the business. No wonder A-listers like Downey Jr. are scrambling to get a piece of the August brand. It is so exclusive that literally no-one has the suit he is creating next but the person he creating it for.

And what a statement a David August suit makes! Who can forget Tony Stark's charcoal grey pinstripe with the phat gold and blue kerchief, or the sleek black tux with the perfect bow tie. Of course, the entire Bay Fashion show was a feast. As mentioned, we also got to see the works of some wonderful Sac designers. Even Sac Fashion's own Duane Ram was spotted scurrying about as he often is, propelled by some internal clockwork. And for my many friends who believe fine automotive technology like a Lambo is something only for those gauche purveyors of conspicuous consumerism or a 60 year old man trying desperately to reclaim his youth, I have only this to say: RASPBERRIES! I mean these cars are hot. 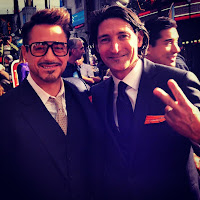 With the models, they are even hotter! Oh, that's right, the evening was sponsored by Lamborghini. Eat your heart out hipsters!

Look, there is just something about a vehicle that can travel 185 miles an hour. Married guys with expecting wives remember, you may have to get your honey to the hospital quickly one day so get there fast and in style. And by the way, big ups to Bay Fashion Magazine. The entire evening was first class and aside from a few minor hickups like a woman on the mic who clearly had no business being an M.C., I'd say it was all top notch. (She was probably the owner's wife).

Now, for those who do not know, Bay Fashion has been taking over the SF fashion scene and, if I have anything to say about it, the film scene as well. They are doing a 1st rate job and should be commended. Hell, the cover of the current mag features Techno/hip-hop gurus The Far East Movement! What could be better??

I'll tell ya what could be better: the addition of Iron Man's designer, that's what. Meeting Mr. August and seeing what a wonderful and giving soul he is reminds me that many at the top, who have talent and skill honed over years, are not simply there because they had a dream but because they studied and nurtured that dream. David also serves as a reminder that true humility is as attractive as any wonderfully designed suit.

For those of us who are truly into the aesthetics of film, or dare I say "Fashion On Film", Mr August serves as a reminder that film is a collaborative art and that everything even down to what a person wears is revealing of character. Just as David has designed a brilliant wardrobe for a super-hero, billionaire, playboy philanthropist, so too can you give some thought to the dress habits of your characters and how they shine through as a result. 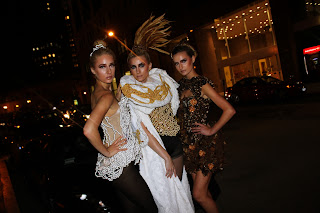