Charlie Kaufman knows he has a reputation for being, well, a bit out there. Maybe it comes from having such a wildly original, meta style, cooking up movies where people step into the mind of John Malkovich or figure out a way to erase a failed romance from their memory. Perhaps it’s because he wrote himself into the 2002 film “Adaptation.” Nicolas Cage’s neurotic, perspiring performance as Charlie (and his more confident twin brother, Donald) are so seared into our minds that it can be difficult to distinguish between Kaufman’s on-screen alter ego and the real McCoy.

Despite riding high off scripting 1999’s “Being John Malkovich” and “Adaptation,” and winning the Academy Award for original screenplay for 2004’s “Eternal Sunshine of the Spotless Mind,” in his first years as a screenwriter Kaufman was an enigma. “I think there’s this mythology around me because I was, and am, kind of camera-shy,” he admits during an hourlong phone interview from New York, where he had finished post-production on his latest film, “I’m Thinking of Ending Things,” based on the 2016 novel by Iain Reid that’s out on Netflix Sept. 4. “There were all these articles about me saying I wouldn’t give interviews. I kind of got mad at a guy once because he asked me, ‘Why don’t you do interviews?’ I was literally doing an interview with him at the time!”

Over the years, Kaufman, now 61, says he has grown more comfortable with others and with himself. During his talk with Variety, he seems very different from the caricature of him. He’s self-effacing and easygoing, happy to speak at length about pretty much everything. When asked about Susan Orlean’s recent charmingly inebriated tweetstorm — the novelist’s “The Orchid Thief” was the jumping-off point for “Adaptation” — he laughs, “I’m not on social media, but I did hear about it.”

Kaufman is also willing to talk about the term “mindf—,” a phrase that seems to come up again and again when discussing his work. It’s usually meant as a compliment, a way of referring to something that defies easy categorization, but Kaufman isn’t totally sure it captures his style. “I have heard that description of things I’ve done, but I don’t set out to do that,” he says. “But I think the way to approach one’s work is to put it out in the world and let it do what it does. So if people want to call it a mindf— or say I’m weird, that’s their prerogative. But it’s not my intent.”

In fact, Kaufman says he tries to do the opposite. “I’m more interested in having some sort of emotional resonance and giving people something to respond to,” he says. His frequent producer Anthony Bregman puts it best. “He’s trying to really push you emotionally to feel things and release you from the need to explain what’s going on intellectually and just understand by how it makes you feel,” Bregman says. “It’s more a heartf— than a mind—.” 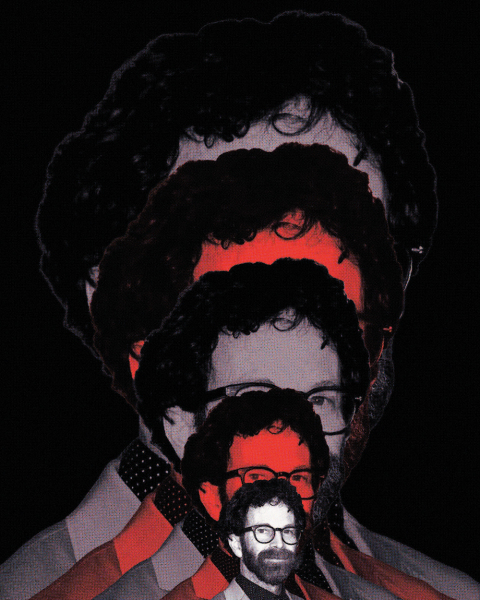 Still, Kaufman is prepared for the “MF” word to rear its head upon the release of “I’m Thinking of Ending Things.” The twisty thriller centers on a young woman (Jessie Buckley) who takes a road trip with her boyfriend (Jesse Plemons) to meet his parents (David Thewlis and Toni Collette) at a remote farmhouse during a snowstorm. There are long scenes set entirely in the car where the two characters are simply conversing that lend an unsettling mood to the proceedings, and a plot that veers from offbeat to downright strange. The film plays with time and memory and takes bold risks, incorporating everything from animated characters to a dream ballet lifted straight out of “Oklahoma!” As with most of Kaufman’s movies, trying to sum it all up is nearly impossible.

“It’s terrifying to talk about this film!” laughs Buckley, who stepped into the role that Brie Larson was originally set to play. “I would read it two or three times a week and send Charlie an email saying, ‘Do not worry. I understand exactly what this is about.’ I would tell him everything I was thinking, and he would respond, ‘Amazing. That makes total sense!’ Then I’d reread the script and go back and say, ‘I’m sorry ­— that was completely ridiculous. This is what it’s really about!’ And he’d say, ‘Oh, that’s great!’”

The film was unlike anything Buckley had done before, but she adored the experience of working with Kaufman. “He is the most humane inhuman,” she raves. “He’s smart and he challenges you, but he’s also hilarious and encourages such vulnerability.”

Collette also appreciates Kaufman’s willingness to experiment. “My favorite thing he said on set is something I concur with and often mumble myself: ‘There are no rules in life,’” she says. “I think that’s why his work is so exciting. It’s free of conditioning and normal expectations.”

“I’m Thinking of Ending Things” marks Kaufman’s first major solo directorial effort since his 2008 debut, “Synecdoche, New York,” an artful film but a box office misfire. Since then, he has co-directed with Duke Johnson the animated 2015 film “Anomalisa,” based on his play, and helmed a 2014 pilot for FX called “Here and Why” that ultimately wasn’t picked up. “It was brilliant, but it wasn’t cheap and it wasn’t for everyone, and that’s the tricky thing,” says Bregman, who was an executive producer on the show. Asked if he thinks Kaufman has ever made something for everyone, Bregman responds: “No, I don’t. And who’s interested in that? Maybe some people, but I’m certainly not interested in something that’s for everyone.” Still, when it comes to the bottomline-oriented entertainment business, Bregman acknowledges, “There’s this tricky thing that needs to get matched — the price of something versus what the potential audience is for it.”

When Kaufman came across Reid’s book, he thought it fit Bregman’s criteria. It looked like it could be made for a reasonable budget, and the thriller genre was considered an easier sell. Kaufman says he was, frankly, “desperate to do something.” Neither of his previous films had done well financially. “Anomalisa” had been a particularly challenging experience; at one point funds were so low, a delivery person showed up to repossess the bottled water. (A fast-thinking producer hid the bottles in another room.) He had also spent years trying to get a musical made about the relationship between a director and an internet troll, titled “Frank or Francis.” But despite a cast including Steve Carell and Cate Blanchett, the project stalled. Kaufman says some of the themes worked their way into his novel “Antkind” (published last month by Penguin Random House).

“[‘I’m Thinking of Ending Things’] took place in a car and a farmhouse, and I thought, ‘That sounds easy and inexpensive!’” Kaufman says. As it turned out, it was a very difficult production. The 30-day shoot was whittled down to 24. Kaufman had hoped to build a car and a farmhouse he could disassemble to get creative shots, but budget restrictions prohibited that. And for a movie that plays with time and memory and incorporates magical elements in its storytelling, the most challenging part of filming turned out to be something practical: the weather. Says Bregman, “As with all of Charlie’s movies, this takes place in the physical world but also inside the head, inside the mental stage, so the snow itself is a major character in the movie and has to be treated very precisely. You can’t cut around it.”

“The snow was the worst,” Kaufman groans. “We had no control over it, and it delayed the process and made the days long.” There were three night shoots in a row filming the exterior of a Dairy Queen-esque ice cream shop called Tulsey Town, when a torrential downpour hit. “The practical snow turned into slush and then nothing, and we were all exhausted. And we had to shoot that scene that day because there was no time.”

The cast members say they enjoyed the process. “It was intense, a small budget, and we rarely got more than three takes in a scene,” says Buckley. “But from my side, there was so much goodwill toward Charlie from every single department. Everyone was so committed to every bit of the story. They showed up because they were emotionally engaged and thrilled to be genuinely challenged.”

Collette calls Kaufman “the best kind of artist” because he has specific ideas but is also open to collaboration. Asked about challenges, she says, “Maybe trying to create a believable throughline for my character in a piece where the ground is constantly moving. But that was also the best thing about it. Here, anything is believable, or rather, acceptable. So the choices were kind of limitless. That can be daunting, but also freeing.”

Kaufman has deep respect for his actors, perhaps because he started out as one before giving it up after his freshman year of college at Boston University before transferring to NYU. While he toyed with going back over the years, and tried stand-up comedy for a time, he says he just lost the drive somewhere along the way. “I remember auditioning for summer stock and just feeling embarrassed and humiliated by it,” he admits. “And actors have to go through that for their entire lives.” Kaufman has both empathy for performers and a genuine awe for what they do. “It’s a difficult and vulnerable position to put yourself in, and I respect that,” he says.

When it comes to casting, he has one key criterion. He only wants to work with actors who are nice. “I can’t handle it,” he says simply. “My job is difficult enough trying to figure out how to do this thing and construct it. I’m not terribly experienced so I don’t want that drama; I would want to walk off set, which I can’t do. So I try to surround myself with people who aren’t going to force me into that feeling.”

Kaufman went into “I’m Thinking of Ending Things” thinking it might be his last directing job. “I’m getting up there” in age, he says. “I haven’t made a movie in 10 years, so I said I’m going to make something I want and not worry if this will lead to another job. If I get to do it again, it’s gravy for me.”

Despite those fears, he’s maintaining a busy schedule. He’s writing “Memory Police,” a script about dreams, for Ryan Gosling’s company and developing a limited series for HBO based on Arthur Herzog’s book “IQ83,” about a virus that causes stupidity.

And as he releases his next film into the world, Kaufman, as well as his producer, are happy to address some of the central mystery that clings to him. “Charlie doesn’t have that manic disposition Nicolas Cage portrays in ‘Adaptation,’” Bregman says with a laugh. Kaufman, though, admits that people have told him they absolutely see him in the performance, and allows that it “represents an aspect of me, I guess.”

While he may have created a monster in some ways by having Cage portray him on-screen, Kaufman says one aspect of the character has played to his advantage — one that has echoes in his willingness to address his demons at this stage of his career. “I did have a very serious issue with sweating during meetings,” he reveals. “I would always feel it trickling down my forehead, and it’s so embarrassing, and you know they can see it. So I wrote that into the movie.”

After the film came out, Kaufman found the sweating ceased. “Once I stopped worrying about it,” he says, “it didn’t happen anymore.”