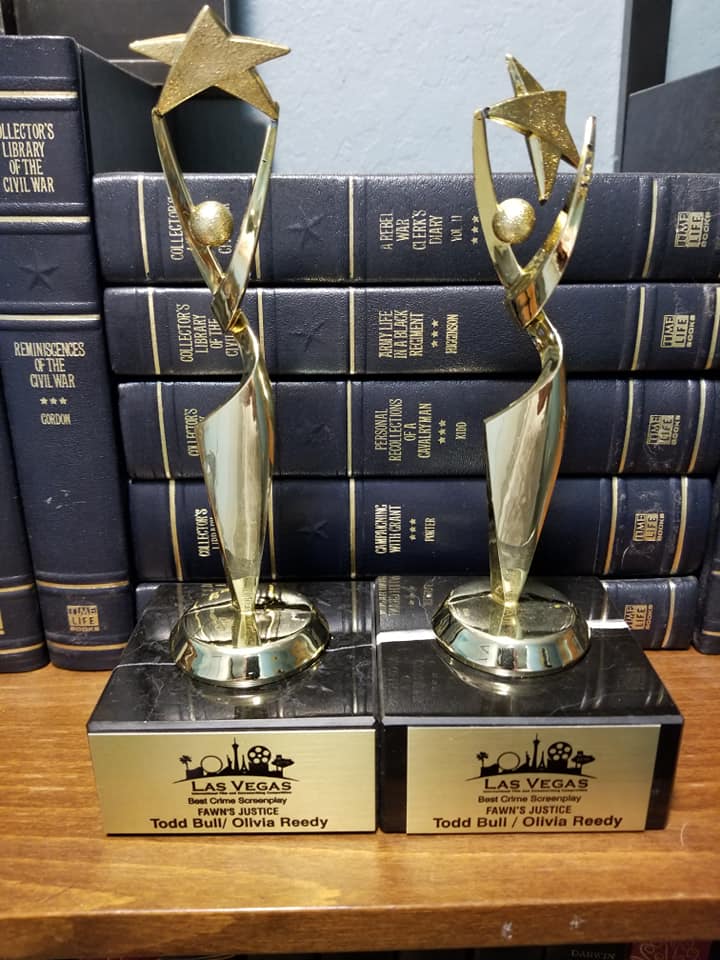 A few years ago I didn't know how to write a movie script. I had no thoughts about becoming a screenwriter. The very thought seemed nutty. But now I've got five finished scripts under my belt with my creative partner, Todd Bull, and all have won accolades. Here's what happened.

Todd and I met in high school in the middle of nowhere, a remote village in the Golden State on a lonely coast near the Oregon border. We shared a love of community theater, English class and the speech team. He was also the projectionist at The Pic Theater and a drive-in called The Crest. Me? I loved movies!

We were friends - really good friends - for a couple of years. But like many perfect things, we managed to screw it up with a heated argument and a heaping helping of stubborn teen pride. After that, we never spoke again.

Well, okay… Never is very long time. Facebook has a way of dredging up your past like algae in a warm goldfish bowl. It's inevitable. One New Year's Eve a few years back, I was watching TV in a funky Seattle dive bar just after midnight. I'd tippled just enough champagne to be confident, when I saw a commercial that pissed me off. Chevy was trumpeting that their spokesmen were "real people, not actors."

"Actors aren't real people? What am I, chopped liver?" I gave Chevy a piece of my mind in a pithy Facebook post, citing my long history as a Ford driver.

In this magic moment Facebook suggested I should be friends with Todd Bull. His classic electric blue '68 Ford Mustang was a trophy winner in area competitions.

"Todd Bull?" I blurted, giggling. "Of course I should be friends with Todd Bull!" Drunk, I sent him a friend request. I forgot about it in the morning.

A month later, he confirmed it - "He always was kinda lazy," I thought - and in a 5-hour phone call, we caught up on our separate lives. He was a road warrior now, a traveling salesman, and our chat killed time on his trek home from Land's End.

Todd on the other hand had gotten married, raised twin boys, divorced, married again, and had become a budding screenwriter with a really hot car - just like the one he used to drive me around in high school. Except shinier. A lot shinier.

Todd also wrote screenplays in his spare time and entered them in contests. Suddenly I remembered Todd has two speeds - On and Off. Typical fiery Aries. "He always was a go-getter," I thought.

GETTING SOLD ON SCREENWRITING

During that call, Todd asked me to read one of his movie scripts. He thought we'd make a great writing team. I thought he was crazy.

I read it anyway. It was good! But it lacked a certain stickiness to the rules of grammar and the conventions of Hollywood. It needed tightening. It needed a woman's touch.

"Honest. Go ahead. I'll never work on it again."

Well… Never is very long time. That script was Singlewide Pride. True to my word, I broke the thing. I added a scene at the beginning, lopped off the end, wrote a new mid-point and cleaned up the dialog. Something clicked for me. I got it done in a week.

We were off to the races. We ping-ponged the script back and forth a dozen times until it shone like a sapphire. The result? Singlewide Pride won the Platinum Award at the 2017 Oregon Film Awards. Our Wounded Knees won the Gold Award that same year. The two of us were about as confident as patrons in a dive bar on New Year's Eve.

BREAKING THROUGH THE BLOCKS TO SUCCESS

We decided to make a film, so we took a short film writing class. It turned out to be the mental equivalent of a root canal - essential but painful. We talked through some really tough come-to-Jesus moments. The work got better.

We finished writing Flight of the Heron and made it into a movie. It premiered this fall at a theater called The Crest, though it wasn't a drive-in. The short was an official selection of A Place Called Sacramento film festival. We're making our next short now, and we're writing a feature to produce next year. We have a couple dozen simmering on the back burner.

Todd and I discovered the best way to write a movie script is to make a movie first. Funny, right? But it's true. It opened our eyes to things we never could have learned otherwise; the cost of making it was our film school tuition. Very cheap.

Our feature script Fawn's Justice won Best Crime Drama at the 2019 Las Vegas International Screenwriting and Film Competition. We each got a shiny gold trophy.

Fawn's Justice also won Best Crime Drama at the 2019 Twin Falls Sandwiches Film Festival in Idaho, one of the Top 100 Reviewed Film Festivals. We were honored with a table reading of a scene, and we drove 1100 miles there and back to pick up our homemade trophy, a shiny white sandwich plate. We couldn't be more proud.

So, why is it called Sandwiches? Well… that's a whole other story. Come back next week, and we'll tell you the rest!

Tags: how to write a movie script, becoming a screenwrit
E-mail me when people leave their comments –
Follow