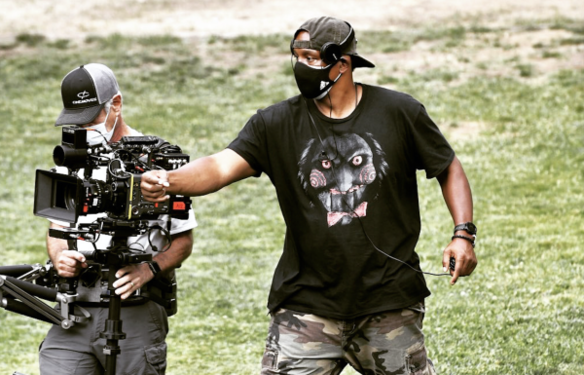 Like many, filmmakers Deon Taylor has been stuck at home during the coronavirus pandemic. And like many, he’s been itching to get back to production.

Inspired by quarantine and lockdown, Taylor told his wife, producer Roxanne Avent Taylor, he was going to make a film. He wasn’t sure how, but after some calls, “Power” star Joseph Sikora and DP Christopher Duskin were on board to join him before a script had been written. Taylor quickly wrote a script.

His script follows a group of friends gathered in the remote mountains near Lake Tahoe  to stay at the Historic Strawberry Lodge. What was supposed to be a much-needed getaway and celebratory weekend quickly turns into a nightmare. After waking up to an emergency warning, the friends find out the virus has mutated to a more highly lethal and contagious airborne threat, forcing them to shelter-in-place immediately.

Taylor and Avent Taylor talk to Variety about how the film came together and discuss the protocols they followed on set to ensure cast and crew safety.

When did you and Roxanne start discussing making this movie and being comfortable with the idea of filming with a crew?

Deon Taylor: We went through three iterations of ‘What the hell are we doing?.’ The first thing I did was create this series called, “Black Cheer” and we started interviewing everyone. I spoke to Hillary Swank, Jamie Foxx and Tyrese Gibson about film.

Secondly, there was the Black Lives Movement which I was very active in. I led a march with 53,000 people and they had tracked the march and there were no COVID-19 cases from it.

I had been sitting there too scared to go out, and if we did, we wore masks. I was also thinking about the anxiety of it all, and that’s really where it began.

How did you go about gathering your cast and crew?

Taylor: I told Roxanne I had this idea and I thought it was going to look like a student film with ten people. I called cinematographers and thought I’d get some young people to act in it, but before I knew it, Roxanne looked at me and said, “This is not a student film.”

The original idea was to go to a cabin and have three people in the cabin and do something very small and indie.

She started to show me all these locations and we found one giant lodge. We drove from Sacramento to Tahoe and that’s where it all began. I had no script — just this idea in mind.

The first person I called was Joseph Sikora and I told him I didn’t have a script, but I had this idea. He said he was coming. And so he and the DP Christopher Duskin were the first to say yes.

I started writing the script and Roxanne went to COVID class.

Roxanne, as a producer you had to take that COVID class and ensure safety protocols were met, what went into that preparation and assembling a small crew?

Roxanne Avent Taylor: It was tough because of the unknown and what was going on in the world. Every guild had their safe way for the best way forward. I think it boils down to what’s best for your production. I spent hours on the phone and hours reading everyone’s procedures. I spent time with labs and making sure I understood what the tests were. My heard was spinning as I tried to find the right method.