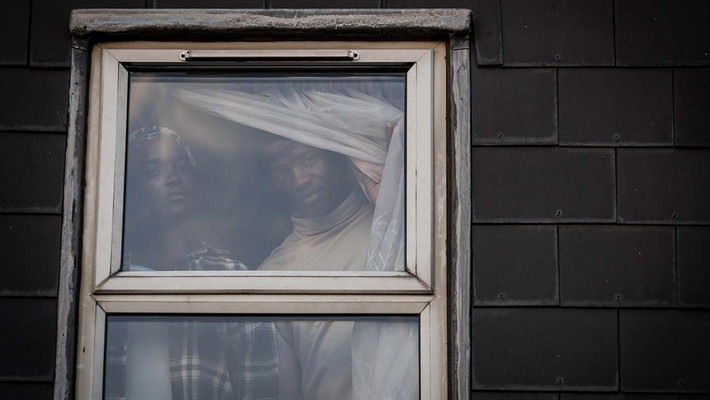 Remi Weekes looks at the origins of his Netflix horror film, which centers on a South Sudan refugee couple.

This Halloween season offered no shortage of new horror movie releases, spanning a variety of subgenres. One that stands out is Remi Weekes’ His House, which premiered Oct. 30 on Netflix. The film follows a South Sudan refugee couple, Bol (Sope Dirisu) and Rial (Wunmi Mosaku) who are given asylum and are relocated in a small English town. Their new setting proves to be challenging, not only because of the dilapidated housing project they’re forced to stay in, but because of prejudiced neighbors, and the watchful eyes of government inspector, Mark (Matt Smith).

These issues are amplified by the presence of something supernatural that forces them to relive their traumatic escape from South Sudan, and makes them question if there’s anywhere they truly belong.

Exploring the horrors that come with the Black experience is finally mainstream, a topic explored in Xavier Burgin’s Shudder documentary, Horror Noire: A History of Black Horror (2019). His House furthers that conversation by taking it outside of the borders of America and telling an eye-opening, and spine-chilling narrative with global and personal ramifications. His House isn’t only socially-concerned in its aims, it’s also frightening.

The Hollywood Reporter spoke to director Remi Weekes about the challenges of directing his first feature film, gaining insight into the perspectives of South Sudan refugees, and using filmmaking to create larger conversations about the human experience.

How did you develop the idea of His House and come aboard this project?

Two producers in the U.K. spoke to me while I was doing commercials and short film work and told me right there that they wanted to do a horror film based on the immigrant perspective and they were currently working with two writers but felt that it wasn’t quite where they wanted it to be yet. So they asked me if I could pitch them my take. And I guess I just pitched them what you see in the film which is a two-hander psychological story about two people trying to overcome their trauma, and then survive after surviving.

In terms of getting into the experience of Sudan refugees, did you talk with a lot of people from that area to get insight into the characters at the center of your film?

Yeah, we did. During the development of this film we did a lot of research on the first-hand experiences of asylum seekers in the U.K. and people from South Sudan. And we also looked at the process and infrastructure of immigration and how the government treats you. When we were doing the research one of the things I found particularly interesting, which began the journey of the film, was that when you claim asylum you’re given accommodations, given a house, but there’s a really draconian rule that you’re not allowed to leave or go to a different house. You have to stay put. And you can’t get a job. You’re given a small allowance. So for many people claiming asylum it can be traumatizing. And that was the center of the film.

This being your first feature, what were the challenges or surprises that came with it?

I guess for my first feature it was all such an overwhelming experience. And not only that, but when you’re making short film work you work so hard for that one or two-day shoot and then it’s over and you can relax. But for this, I really had to pace myself. That was very much a new experience to me too, to work on something, including pre-production for months on end and really build a family with the people you’re working with.

Is horror a genre you’re interested in sticking around in for a while in terms of future projects?

I think Jordan Peele really opened the doors for people of color who haven’t really been the focus on the genre. One of the things I admire about His House is how it broadens that conversation globally. Was creating a space for more Black people in the genre something you were aware of?

No, I wouldn’t say that was on my mind. I guess I have grown up loving movies and I always loved spectacle and going to the movies and seeing something big and bold, and exciting. Generally what happens when you’re a fan of any kind of art form is you can love it but also be aware that the people inside the film don’t really share your same references, or that the faces in a scene aren’t the people you spend your life with. I think probably for me I want to tell the same scale of story and employ the same type of experimentation, and spectacle to create conversations that may be more relevant to my life. So this film for example creates a conversation about assimilation and how much of yourself do you let go to fit into a new world.

Article by: Richard Newby for the Hollywood Reporter.