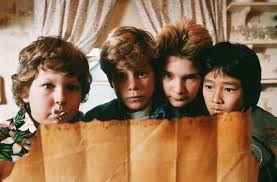 Josh Brolin, Sean Astin, Martha Plimpton, Corey Feldman, Kerri Green, Jonathan Ke Quan and Joe Pantoliano are among the cast members who will log on for the Dec. 5 event.

The Goonies gang is getting back together.

Stars of the classic 1985 adventure film — Josh Brolin, Sean Astin, Martha Plimpton, Corey Feldman, Kerri Green, Jonathan Ke Quan, Jeff Cohen, Joe Pantoliano, and Robert Davi — are reuniting for a virtual fundraiser on Dec. 5 to benefit No Kid Hungry and its work feeding kids and families amid the COVID-19 pandemic and beyond. The event is free to stream and donations will be encouraged.

The Richard Donner film, which was penned by Chris Columbus from a story by Steven Spielberg,  follows a ragtag group of kids, aka "the Goonies," as they hunt for buried pirate treasure. Along the way, they run into trouble when they come face-to-face with the Fratelli crime family.

In a statement announcing the new Goonies gathering, Donner said the group is "honored" to have the opportunity to help No Kid Hungry. "The same spirit of bravery, sacrifice, and camaraderie that the Goonies showed in our movie is what families all over the world are experiencing as we all face this pandemic," he said.

Added Tom Nelson, CEO of Share Our Strength, the organization behind the No Kid Hungry campaign: "With more students learning virtually than ever before and with record jobs and wages lost, an unprecedented number of kids are going hungry during this crisis. Amidst this increased need and an uncertain school year, kids need our support more than ever. We’re grateful to the cast of The Goonies, Warner Bros., and Warner Media and those tuning in to the reunion special to help ensure kids have access to the food they need."