Last year, not a single major studio movie included a transgender character, according to GLAAD. 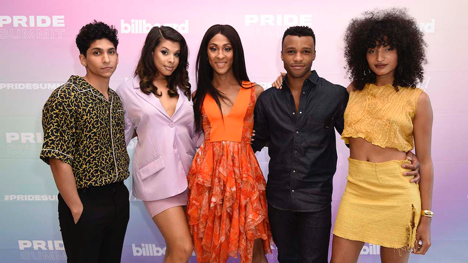 “America’s greatest cultural export are our films,” GLAAD President Sarah Kate Ellis told The Times. “And we have the ability to enter markets and countries where it’s still illegal to be LGBTQ, and tell LGBTQ stories out of Hollywood. And so this is one missed opportunity after another.”

Being lesbian, gay, bisexual, transgender or queer remains illegal in 70 countries around the world, even as a modern civil rights movement is in the midst of going global.

“We are in this long-needed, much-necessary Black Lives Matter movement and moment,” Ellis said. “And it’s hit a crescendo. … This is a time to double down on telling people of color’s stories, both queer and cis.”

Television shows like FX’s groundbreaking “Pose” and documentaries such as “Disclosure” on Netflix have picked up on this trend, especially as Black trans women in particular have become a focus of the movement. But the movie industry has failed to follow suit.

“We absolutely need trans stories told, and on the bigger the screen, the more powerful it can be,” Ellis said.

“We know about 20% of Americans know someone who’s trans,” she continued. “So 80% of Americans are getting their interpretation, experience, connection with trans people through film, through television, through media. That’s why it’s so important that they are being represented in the major [studio] films.”

GLAAD recorded zero transgender characters featured by the top studios between 2017 and 2019. Although a handful of transgender and/or nonbinary actors appeared in releases (think: Indya Moore in Universal’s “Queen & Slim” and Trace Lysette in STX’s “Hustlers”), none of their characters were explicitly given those identities. The only nonbinary character recorded the year before, in 2016 (All in “Zoolander 2”), was used solely as a punchline.

Examining the centrality of LGBTQ characters to a film’s plot presents another key takeaway: In 2019, more than half (56%) of all LGBTQ characters had less than three minutes of screen time. Most of those (42%) appeared on screen for less than one minute.

Although GLAAD nodded to “Avengers: Endgame” and “Toy Story 4" for depicting brief glimpses of queer characters in daily life, the report lauded films like “Booksmart” and “Rocketman” as examples of weaving gay and lesbian identities into the narrative.

As Ellis put it: “People who have the least visibility … in our community, in this country, their voice and who they are oftentimes get defined by Hollywood. And so [film is] a very powerful tool in helping to educate, inform and bring reality to who LGBTQ people are.”

Just this year, the report tied in another underrepresented identity: the disability status of LGBTQ characters. Of the 50 total queer film characters counted, only one had a disability (Poe in Lionsgate’s “Five Feet Apart”). But keeping track is a start, said Megan Townsend, GLAAD‘s director of entertainment research and analysis.

“There’s a definite, significant overlap between LGBTQ people and people who also happen to have a disability,” she said. “So we really wanted to make sure that when we’re talking about the community, that we’re also including everybody in that community.”

Overall, a slight increase in the percentage of LGBTQ-inclusive films emerged: 18.6% from 18.2% in last year’s report. But the findings also examine opportunities ahead for the major studios. From Sony’s upcoming “Happiest Season,” a holiday rom-com about a lesbian couple, to Disney’s first gay superhero in “The Eternals,” Townsend is optimistic about a changing movie landscape.

“The great thing about the report is being able to lay out where everything is at and make inclusion — in all of its various forms — part of the conscious thought, so that people are aware of where we’re at and where we need to go,” Townsend said. “But I think that there is definitely lots of opportunity ahead.”

Article by: Laura Zornosa for the L.A. Times