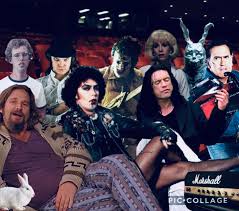 What crazy alchemy can transform the worst movie of all time into a golden work of staggering genius? When it’s dubbed a cult classic, of course! Welcome to the cinematic universe of the second coming, where Return Of The Killer Tomatoes! is as venerated as Citizen Kane and the offbeat, experimental, queer, schlocky, flawed and downright weird is worshipped.

Yet smelling out a genuine classic from just another ‘bad’ or misjudged movie (hallo Cats! Though give that time…) is trickier than you might think, even for the experts, as we found when we set out to compile a new cult canon. “Every time you think about ‘cult’ and what it means, there’s always an exception to the rule,” admits Michael Blyth, who programmes the annual Cult strand for the BFI’s London Film Festival alongside their LGBTQ+ festival BFI Flare. For him, The Rocky Horror Picture Show (1975) gives the cult classic blueprint. “When it was released, it wasn’t a critical or commercial success and yet it found an audience who so fell in love with it, they got together to have this celebratory union, where they could dress up and quote along with and create a whole subculture out of this film that would otherwise have been lost or forgotten.”

I was one such celebrant. Aged 15, I popped my Rocky Horror Picture Show live audience participation cherry at a midnight screening in London. Here I channelled my inner Transylvanian transsexual, dressed in fishnets, a borrowed tailcoat and armed with a water pistol (to simulate rain at a key moment), and chanted along to the pre-ordained responses I’d devotedly learnt from a bootleg cassette tape. It was one of the most joyful movie-going experiences of my life. Yet as the years have gone by and Rocky Horror has been absorbed into the mainstream, you wonder if even this ultimate ‘cult’ movie can honestly still be classified as one.

‘Cult’ should exist in the original ways we understood it – a celebration of lowbrow culture, based around ideas of camp and irony, transgression and subversion – Michael Blyth

“We have to be careful not to overuse the word ‘cult’ so it loses all meaning,” agrees Blyth. “Some people talk of Star Wars being a ‘cult’ film because it has such a developed fandom and subculture but I think ‘cult’ should fundamentally exist in the original ways we understood it – a celebration of lowbrow culture, based around ideas of camp and irony, transgression and subversion.” And while the Star Wars universe might hold many wonders, there’s a notable lack of zombie cheerleaders or obese transvestites eating real dog poo on the Death Star (unless I missed that in the Blu-Ray extras).

So where does the ‘original’ meaning lie? US film writer Danny Peary supposedly first gave the term currency with his 1980 book Cult Movies. In it, Peary picks out 100 films from Andy Warhol’s Bad to The Wizard Of Oz which “have elicited a fiery passion in moviegoers that exists long after their initial releases”. This alternative film canon contained such world offerings as El Topo, Chilean director Alejandro Jodorowsky’s hallucinogenic head-trip of an ‘Acid Western’, and naughty French softcore classic Emmanuelle. Even so, the term ‘cult movie’ was pretty much an “American thing” according to programmer-turned-film historian Jane Giles, author of Scala Cinema 1978-1993.

Giles joined The Scala as a programmer in 1988. Modelled on the midnight movie theatres of New York and LA and the queer theatres of San Francisco, The Scala was the legendary London repertory cinema which ‘Pope of Trash’ auteur John Waters once described as “a country club for criminals and lunatics and people that were high… which is a good way to see movies”. Pretty much every film The Scala screened, including one of Giles’s personal faves, a hardcore 1975 horror/comedy called Thundercrack! (still banned in the UK), could arguably be called a ‘cult’ classic, yet they generally weren’t back then. According to Giles: “Even when Withnail and I came out, which was the very definition of something that became a cult movie, it wasn’t called that.”

For Giles and her fellow acolytes, the definition of a true cult movie was one that had to be discovered and that would appeal to the Scala’s criss-crossing rainbow tribes of gay people, punks, rockabillies and goths. She considers that a big part of what made Withnail And I a cult was that it had a botched theatrical release, meaning, despite a handful of glowing critical reviews, hardly anyone could get to see the film – this being a pre-video era. “It used to be one of the benchmarks – that if something was difficult to track down it was a cult movie by definition,” says Giles. She references Ali Catterall’s book about British cult movies, Your Face Here, in which he argues that it wasn’t until the 90s and early noughties that marketeers decided ‘cult’ was a cool word and started slapping it on any and everything that wasn’t completely mainstream – to the point it became meaningless.

So in 2020, an era when Netflix hands you ‘cult classics’ on an algorithmed platter, are the glory days of cult movies over? “I think that definition has really changed,” says Giles.

“For me, cult movies are the ones that are kind of out-of-the-box,” declares rising Iranian director Babak Anvari. “You can’t fit them anywhere.” Furthermore, any definition is location dependent. He points out that growing up in Iran, pretty much every Western movie would be considered ‘cult’, because most of them were banned. “We had these video dealers that would come to your door with a briefcase full of tapes – it was kind of like buying an illegal substance! So pretty much every film that I watched in the 80s and 90s had that cultish feel, even mainstream films, like Titanic.” It’s interesting to think that somewhere in an Iranian basement there might have been a 90s underground Titanic club night full of drag queen Kate Winslets.

Anvari’s own feature debut, Under The Shadow (2016), a psychological horror set in 1980s Iran, has a cult feel, even if it’s arguably too critically garlanded to be a true ‘cult’ phenomenon. Mark Kermode recently cited it as one of his top 10 films of the last decade. As a filmmaker, did or would Anvari set out to make a cult movie? “If my films were considered ‘cult’, that would be a badge of honour!” he declares. “As a film student, those were the films that really excited me. But to make a cult film on purpose? I don’t think that’s possible.”

He’s right. Studios might try to market films as ‘cult’, but you can’t manufacture one. Because, unlike genre, a cult classic isn’t defined by the content of the work, but by its audience (be it only a devoted cult of three). In drawing up our own criteria, we have taken all this conflicting advice into account. Our series will include those films that were box office or critical failures, which went on to have another life beyond their individual release.

And what’s cheering, particularly given this is written during the time of lockdown, is that cult life is a gloriously communal one. As Blyth concludes: “Cult cinema has such a way of bringing people together.” One of his fondest memories as a programmer was a sell-out screening of Troma’s 1984 B-movie The Toxic Avenger. “There was such a shared electricity of enjoyment. People who’d been watching this at home alone, feeling like they were the only one who could truly love The Toxic Avenger, but no – here they are in a room full of people who also share this weird perverse love for a movie that’s widely regarded as trash. I love that there’s something oddly empowering about that.” Long live cult cinema!