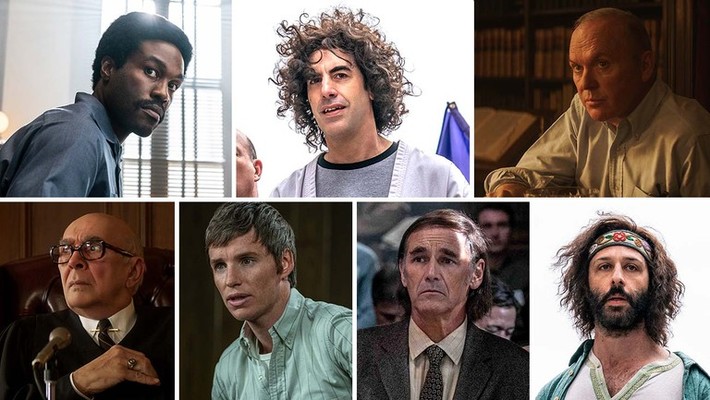 Taking a page out of the playbook that brought the ensemble film Spotlight two supporting acting nominations en route to a best picture Oscar win, the entire cast of The Trial of the Chicago 7 — among them Yahya Abdul-Mateen II, Sacha Baron Cohen, Michael Keaton, Frank Langella, Eddie Redmayne, Mark Rylance and Jeremy Strong — will be pushed for awards in the supporting actor category, The Hollywood Reporter has learned from sources close to the film.

The period piece drama, which was written and directed by Aaron Sorkin, has generated rave reviews from critics and, since dropping on Netflix on Oct. 16, widespread buzz among the general public, with strong notices spread among its numerous well-known actors — some of whom, such as Cohen, have more screen time than others, like Keaton, who essentially makes a glorified cameo.

Trial of the Chicago 7 is an obvious leading contender for the best ensemble SAG Award. But, in terms of positioning its individual performers, a situation like this can play out in different ways. For instance, Netflix has another 2020 ensemble film, Spike Lee's Da 5 Bloods, but the preponderance of reactions to it have hailed Delroy Lindo as the cast's main standout, hence the decision to position him as a lead actor and the rest of the cast as supporting actors. But with Trial of the Chicago 7, there was no clear lead or runaway favorite.

In my unscientific assessment, Baron Cohen, for his portrayal of Abbie Hoffman, probably has slightly more buzz than his castmates (and may have curried additional favor with those who have seen his completely different performance in the new and popular Borat Subsequent Movie). But in this most unusual year, with the pandemic sidelining many would-be contenders, the supporting actor category is relatively thin, which leads me — and apparently those associated with the film — to believe that they might be able to snag multiple noms.

Several films have previously landed three noms in a single supporting category, even in a year without a pandemic: 1954's On the Waterfront, 1963's Tom Jones, 1972's The Godfather and 1974's The Godfather, Part II — but none in the past 46 years. No film has ever landed as many as four.

Article by: Scott Feinberg for the Hollywood Reporter.