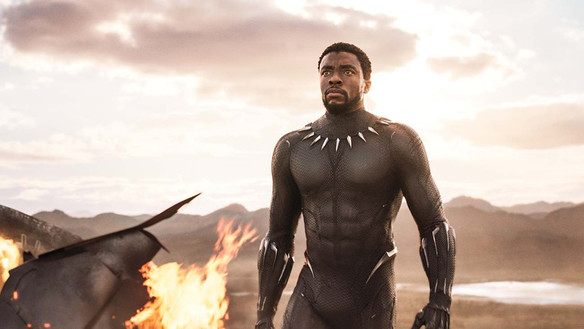 The star’s vulnerable, tender portrayal was so inspiring in part because of its departure from many of the qualities usually associated with strong Black screen heroes.

2020 has been devastating to Black people. From Kobe to COVID, my community has hung, suspended in a relentless state of mourning: A beautiful Black man tracked and killed as he ran through his own community; a neighborhood princess riddled with bullets that, in a macabre irony, were purchased with her own tax dollars; the casual murder of a grown man calling out to his dead mother just moments before passing over, I am certain, to meet her on the other side. We have been re-traumatized at every turn.

It is difficult to remember that just two years ago, we were happy, wrapping our arms against our hearts in an X-shaped homage to Brother Malcolm, and delighting in a fictional monarchy where each citizen is majestic. Wakanda feels like forever ago. In this punishing year of interminable shock and sadness, we have been whipsawed with yet another sudden, and oh so startling, anguish. Yesterday, we lost our king.

My social media feed has been a lamentation. Since last night, as we heard the news that Chadwick Boseman had passed — like so many others this year — my community has shared in a convulsion, a shudder of anguished loss. I am a Black mother, and so I immediately thought of my 11-year-old son and all of his buddies, our beautiful Black babies. And I remembered the night we first saw Boseman, alive and magnificent, larger than life — not acting but, to the children, embodying, actually being, a vibranium-powered Black Panther.

My group of mothers had purchased tickets well in advance so our families could sit together, a tub of popcorn for each of our children. They were all so squiggly and bouncy in their seats that the popcorn spilled everywhere, until the theatre went dark, then suddenly light as they gazed up to see a Black man save the world. I had bought my child a new dashiki for just that very moment.

We were so giddy, full of hope and change and the promise of a new reality. Black Panther gave us a counter-narrative to the past 400 years. Like the radical love of America’s genuine Black Panthers, T’Challa reminded us that Africa was our ancestral home, promised that the secret to great power lay in a futuristic vision of the now and suggested that maybe, just maybe one day soon, America could actually be great.

So many moments in Boseman’s career told these truths of African-American greatness, that we have had to be super-heroic simply to survive. As Jackie Robinson in 42, Thurgood Marshall in Marshall, James Brown in Get on Up, and a spiritual center in Da 5 Bloods, Spike Lee’s fictionalized take on Black America’s Vietnam, Boseman shined. But it was the blockbuster opening of Black Panther that made him, at once, both our ancestral and futuristic king.

Boseman delivered strong Black manhood in this signature role. But this strong Black manhood was not hyper-masculine, not a love’em-and-leave’em Shaft, not SuperBad. Boseman’s Black Panther was so satisfying because of the character's vulnerability, sweetness and admiration for the gift of Black womanhood. Because he was king, his tender regard for the equally empowered women all around him felt like a key to success in the Wakanda universe. Boseman surfaced a softness that only enlarged his power. You can keep your Hulks and Thors. Not tortured or twisted like Batman, not infected with venom like Spider-Man and certainly not displaced from his original home like Superman, Boseman’s Black Panther wielded a super-human power derived from his People.

Boseman’s real life is also a design, and a paradigm, of all the vim and vigor of the Black imagination. Educated at The Mecca, on the hilltop, at Howard University, centered in the beautiful and diverse Blackness of Brooklyn’s own Do or Die Bed Stuy, where he lived through the early days of his acting career, and surrounded by the shining talent of the entire Black Panther cast as accolades rained down to bless the film, Boseman was an incarnation of Black excellence rooted in the Black community.

“Wakanda Forever” is love. We embrace ourselves and our people when we thump our arms against our chests, in one move striking the beating center of our personal power. T’Challa gave us that. Chadwick, cool and confident, affirming in all of us our inherent value, our right to a restorative and spiritual devotion to our own most perfect selves, and signaling at the same time a recognition of the pulse and power in every other beautiful Black person — all those daughters and sons of Africa who look just like us and so reflect and radiate our Black beauty back onto ourselves. His elegant gesture, so fluid and easy, made a king’s salute a communal love. What a gift to the Black children looking up at screens all around the country just two years ago.

Those same children have struggled mightily through 2020. This year, when I fire up my laptop for a nighttime or weekend Zoom, my child asks if I am attending yet another funeral. And even though our personal losses due to COVID began to decline early this summer, I imagine that this fall there might be an uptick, and I might be forced to remain distant as I grieve and click a Zoom link to attend several more.

But my child also knows that, in our ontology, one does not cease to exist when the mortal flesh is done. I do not know for sure what Chadwick Boseman’s spiritual beliefs were with regard to human mortality. But I do know that the official statement about his passage, the description of his last moments on earth, is a familiar one to me and many others in my community. His wife and family gathered round as he moved on, as so many of us of African descent believe a passage should be — and where it should be, in one’s own home, waiting to be carried Home.

Wakanda was a kind of Utopia, which is another word for Heaven on Earth, a perfection we can strive to make real because Boseman’s King T’Challa animated our imagination. When we say Wakanda Forever, we are saying Africa Forever. We are saying Black Life Forever. We are saying we, beautiful Black people, despite everything this wretched year and the 400 other years have done to us, we, each person and all our People, are Forever.