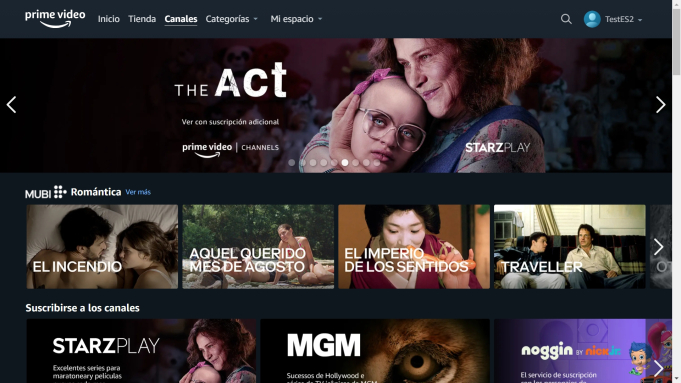 Amazon Prime Video Channels has landed in Spain, where the streaming platform’s a la carte service is now available with several of the country’s popular networks, and more to come.

Already available in the U.S., Canada, Japan, U.K. and Germany, and launching today in Italy and the Netherlands, Prime Video Channels is meant to serve up a traditional broadcaster alternative where convenience is the name of the game. All Prime Video Channels content is available through the Amazon Prime Video app, on any compatible device, using the same user interface and charged in the same monthly bill.

According to Ampere Analysis’ Guy Bisson, “The next frontier really for streaming television globally, is how we really aggregate everything that’s been disaggregated over the past 10 years.”

“It’s a great thing for customers that there’s so much TV and movie content out there. Amazon obsesses about the customer, and we’re always trying to add great selection for them while at the same time trying to make it convenient,” Julian Monaghan, director of Prime Video Channels E.U., told Variety in a conversation ahead of the service’s Spanish launch.

In addition to the aggregated and curated on demand content offered by Channels, Monaghan explained that broadcasts from partnering networks with live TV feeds will also be available through Prime Video. Examples can be seen in the U.S., where the MLB TV service is available, or in parts of Europe, where next summer’s European Championships soccer tournament will be streamable.

“Anyone who subscribes to that service can find a carousel in our interface for the live TV that is on at any moment. They can then watch it live, or catch it on demand later,” he went on.

The majority of Prime Video Channels networks globally are, so far, similarly priced to buying them straight from the source, meaning that consumers won’t necessarily save on any individual network, but have more control over the content they do pay for. The same is true with the service’s Spanish offerings.

“We want to make content affordable, but only the content customers really want,” said Monaghan. “So we let the customer pay only for that content that they want to watch, rather than paying a higher price for a package with a bunch of content included that they may have no interest in at all.”

Prime Video Channels isn’t only about appealing to customers either. According to Monaghan, it offers up a unique opportunity to potential network partners by providing access to Amazon’s pre-existing base of Prime Video customers.

“We want to talk to anybody interested and have that conversation,” Monaghan said of potential future Channels additions. “We know that for each network out there, there is an audience, and we’ve likely got someone from that audience as a Prime customer already. We want to make the networks available to them.”

Article by: Jamie Lang for Variety .