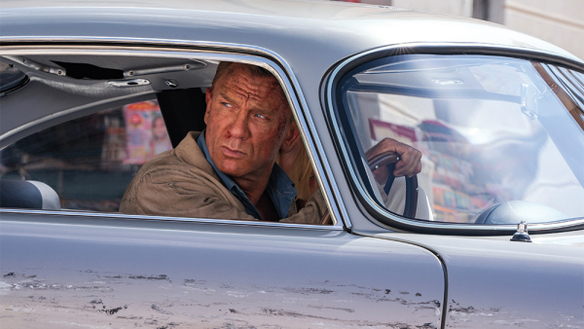 The ShowRoom Cinema in Asbury Park and the Beach Cinema in Bradley Beach got the greenlight to reopen at the end of August when New Jersey Gov. Phil Murphy lifted restrictions on movie theaters. Mike Sodano, who owns both venues, says that even though he can turn on the marquee lights again after dimming them for roughly six months, he’s hesitant to start welcoming back customers.

“Movie theaters need three things to sustain themselves,” says Sodano. “They need profits, they need people and they need product. Well, this pandemic has affected all three.”

Sodano isn’t sure when he’ll begin making moves to reopen. The box office performance of Warner Bros.’ “Tenet,” the Christopher Nolan science-fiction epic that many exhibitors hoped would lure audiences back to cinemas during the coronavirus, has done little to assuage his anxiety. The film earned a meager $6.7 million in its second weekend, bringing its domestic haul to a disappointing $29.5 million.

“‘Tenet’ is a big movie, Christopher Nolan is a big director, and Warner Bros. is a big studio, but there’s one thing they can’t control, and that’s their audience,” says Sodano. “I know this is a marathon and not a sprint, but when you look at those numbers, it does not give me confidence that people are ready to come back to theaters.”

Studios seem to agree. Last week, Warner Bros. moved “Wonder Woman 1984” from Oct. 2 to Christmas, and Universal pushed “Candyman” from Oct. 16 to an undetermined time in 2021. That followed the decision by Disney’s 20th Century to delay “The King’s Man” from Sept. 18 to Feb. 26, 2021. On Sept. 14, STX added to the list of postponements, announcing it would release the Gerard Butler disaster film “Greenland” in the U.S. at some unspecified point in the fourth quarter instead of debuting it this month.

There’s also skepticism that Disney will go forward with its plans to release “Black Widow,” the upcoming Marvel movie, on Nov. 6, or the Pixar adventure “Soul” on Nov. 20, particularly if theaters aren’t allowed to come back online in Los Angeles and New York, where they remain shuttered. That means cinemas will have to gamble that “Tenet” remains enough of a draw that it can keep the box office humming until “No Time to Die,” the next James Bond adventure, opens on Nov. 20. In the meantime, exhibitors are begging studios to take a look at the films they’ve pushed into 2021 and reconsider launching them in October or late September, which are now largely devoid of big-budget releases.

It’s easy to understand the mounting panic among theater owners. In a business that cycles through blockbusters on an almost weekly basis, nearly two months is an eternity to go without a new crowd-pleaser.

As for “Tenet,” the film may still make a profit, but it will have to claw its way into the black.

“‘Tenet’ is doing about as well as can be expected, but a lot of things are going against it,” says Eric Wold, an exhibition industry analyst with B. Riley. “Los Angeles, New York and San Francisco are closed, and a lot of people don’t want to leave the house because they’re concerned. I’m not sure we’ll see a lot of new content until more markets open up and more consumers feel safe.”

It’s a sad state of play that’s unthinkable for a Nolan enterprise, given that the filmmaker helmed megahits like 2008’s “The Dark Knight” ($1 billion worldwide) and 2010’s “Inception” ($833 million). The fact that “Tenet” has a fighting chance is largely due to foreign grosses. The film has earned nearly $200 million globally, mainly on the strength of its overseas revenues, but it will need to top $400 million to break even.

“Where people feel safe, they are going to the movies,” said Richard Gelfond, CEO of Imax Corporation. “That’s how it’s playing out with ‘Tenet.’ The international results in places like China are really good. In the U.S., people didn’t come out in the same numbers.”

For movie theaters that took the risk of reopening — implementing safety measures, orchestrating extra auditorium cleanings and hiring back staff and training them to adhere to new protocols — the dearth of studio content is a big stumbling block. Many venues say they are already operating at a loss, but they believe it’s important to start showing movies again so people will get back in the habit of going to the multiplexes. There’s a chance that some venues could reduce hours of operation, or only open certain days of the week, if attendance remains low.

“It feels like distribution has kind of abandoned the movie theaters,” says Brian Schultz, founder and CEO of Studio Movie Grill, which operates theaters in 10 states. “I understand the core economics at play here, but without new product, we can’t keep things going. Christopher Nolan put an amazing stake in the ground with ‘Tenet,’ but now other studios need to follow his lead.”

So far, filmmakers and media conglomerates are hesitant to take the baton from Nolan. And while major releases such as “West Side Story” and “Dune” still are expected to flicker across screens before the New Year, it’s unclear if the public health situation will improve dramatically in the coming months. Fall and winter will bring flu season, which could make customers who are frightened of the coronavirus even more skittish about venturing out of their homes as cases of COVID-19 in the U.S. remain much higher than in other countries.

“The theatrical business is broken right now,” says David A. Gross, head of the consulting firm Franchise Entertainment Research. “This is an unfamiliar situation. The challenges from the pandemic are beyond the business’s control.”

Faced with this kind of existential threat, analysts expect that domestic box office will drop more than 80% year over year, a sign of just how great a toll the pandemic has taken on revenues. That’s bad news for studios, but many of them are part of sprawling media conglomerates that can withstand the financial hit. Movie theaters have had to pay rent for months while taking in virtually no revenue — and their balance sheets may not improve even when they are allowed to resume operations. Many states require operators to keep venues at 25% capacity so social distancing can be enforced. That means margins are shrinking. Cinemas make most of their money selling popcorn and soda, but fewer people in seats means less activity at the concession stand. That’s made some exhibitors apprehensive about taking the steps to welcome back audiences.

Nic Steele, the founder and owner of Eclipse Theatre in Las Vegas, originally considered reopening when “Tenet” hit screens. But after he crunched the numbers, he decided that he couldn’t make it work. His theaters couldn’t be profitable unless at least half the seats in his auditoriums were full, something that’s impossible given current public health rules. Also, rehiring people, training them and buying supplies to keep his venues free of COVID-19 will add to his costs, making profitability more problematic if revenues are lower.

“If you open too soon and there’s no product out, or just an OK-performing movie every few months, you’re sitting there with a lot of fixed costs and no revenue coming in,” says Steele. “Your cash-burn rate is going to eat up reserves. Whether there’s one guest or 50 guests, a lot of the fixed costs are the same.”

Theaters that have taken the plunge report mixed results. Studio Movie Grill, which operates in states such as Texas and Florida, has reopened 19 of its 31 theaters, but it’s been a struggle to draw crowds. Schultz says his most fervent customers have returned, but that his locations are still receiving calls from potential ticket buyers who aren’t sure if cinemas are back in business.

“There’s a lot of confusion,” he says. “It’s been a slow process, and we have to keep countering the message that movie theaters are shut down.”

Schultz hopes that studios and exhibitors can join together to tout theaters’ new safety precautions and to embark on a campaign to get audiences to visit their local cinemas again. But there’s one major stumbling block: content.

“I want people to know that we’re ready for them to come back to the movies,” says Schultz. “But everything depends on how we all act. If guests come back in droves, then studios will start releasing movies again. If studios start releasing more movies, then audiences will return to theaters. It’s a Catch-22.”

Article by: Brent Lang and Rebecca Rubin for Variety.