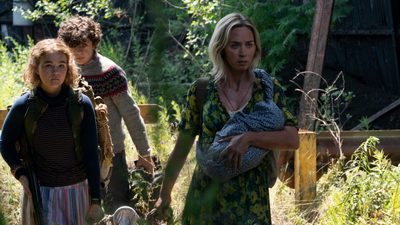 Tight-lipped alien-invasion sequel feels even more unsettling in a world cautiously emerging from the coronavirus.

For many,  John Kransinskii’s “A Quiet Place 2” will be their first movie back since the pandemic forced theaters to shut down. There’s a certain poetry to that, since the high-tension horror sequel picks up just over a year into a life-changing threat to humanity. After a delay of nearly as long from the original March 2020 release date, the fictional Abbott family — or what remains of it — now seems more relatable than ever. They listened to the news when a deadly invasion struck, they played it even more cautious than their neighbors, and they made it this far. Now what?

Well, if you’re vaccinated and feeling safe enough to step foot outside your home, Krasinski has crafted a follow-up that justifies the trip. It can be hard to believe that both the sequel and the instant-classic 2018 original were produced by Michael Bay, a filmmaker who has pushed the moviegoing experience to ear-splitting extremes, since Krasinski so effectively embraces the opposite strategy: Less is more, suggestion can be scarier than showing everything, and few things are more unnerving than silence.

Things got loud when the monsters attacked, but most of the movie was spent in a state of hushed suspense, as the Abbotts made every effort to avoid the detection of creatures with incredibly sensitive hearing. As a result, audiences found themselves attuned to every little sound in the auditorium itself. You couldn’t help noticing the innocuous sniffles and coughs that accompany any public screening experience, except that now, as people cautiously return to theaters, such noises may trigger an extra set of anxieties.

Whereas “A Quiet Place” opened several months into a frightening new “normal” — one in which humans were no longer the top of the food chain — the new movie backtracks to the day the alien species arrived. That’s a smart way around an unfortunate additional limitation put on the sequel: namely, that Krasinski’s character didn’t survive the original. By flashing back to that initial attack, the director can show us how the entire Abbott clan reacted to Earth’s new apex predator, offering a little more time with the family’s late patriarch amid a handful of ambitious close encounters (like the one where Emily Blunt's Evelyn narrowly avoids being hit by an oncoming bus).

Flash forward 474 days, and the surviving members — mother Evelyn, resourceful daughter Regan (Millicent Simmonds), kid brother Marcus (Noah Jupe) and a newborn whose crying could cost them all their lives — must leave the farm and seek shelter at one of the other encampments, marked by bonfires on the horizon. While Krasinski’s core influences so far have been Steven Spielberg and Stephen King, the new movie also cribs from “The Walking Dead” and virtually every mainstream zombie movie that’s come before. The dilemma: hunker down and defend oneself, Alamo style, or venture out and hope what’s left of humankind might still have some vestige of civilization left to it.

The Abbotts are lucky that the first person they meet is an old friend, Emmett (Cilian Murphy), who’s been hiding out in an abandoned steel mill. It takes some convincing to guilt him into helping them, but Krasinski (who takes sole writing credit this time around) loves a protective and potentially self-sacrificing father figure. Though the movie empowers its two leading ladies — especially fan favorite Regan, whose cochlear implant already provided an almost-too-convenient defense against the aliens — the director sends Emmett along as chaperone.

When Regan finds herself cornered by one of the creatures on a train, who better to fire the off-screen shot that saves her? But it’s Regan’s idea to find the nearest radio station and use her cochlear implant to broadcast a signal that could defeat the beasts once and for all. Getting there is doubly dangerous, since other people can be unpredictable, and there are more monsters lurking and listening no matter where they go.

Krasinski takes one of those fatuous “a film by” credits on “A Quiet Place Part II,” and yet, there’s no denying the beardy “Office” star’s ingenuity behind the camera, which extends from the movie’s concept through the director’s oversight of visual effects, sound design and other post-production elements. With its conceit of a family trapped in a farmhouse, “A Quiet Place” owed a clear debt to “Signs” (right down to the inanely simple chink in the aliens’ armor). In a way, the sequel feels even more M. Night Shyamalan-esque, drawing out as it does seemingly mundane sequences for maximum suspense.

With a domestic box office of $188 million, the first film was seen widely enough that Krasinski is probably safe in assuming the audience for this one is up to speed, and therefore justified in weaving tiny nods to “A Quiet Place” throughout (such as the spaceship toy that got the Abbotts’ youngest child killed). But instead of addressing the gaping plot holes — why no one else has figured out the aliens’ weakness, or why these creatures have such scary teeth if they don’t stop to eat anything — the new film wagers if you’re on board for the ride, logic shouldn’t matter.

But it does make a difference, and anyone bothered by the way Krasinski has already ignored such glaring inconsistencies as the monsters’ ability to hear small noises from far away, but not breathing or heartbeats mere inches from their ears, will drive themselves crazy this time around. As the helmer’s canvas widens, it becomes even harder to overlook the obvious (like the decision to transport a baby through open spaces), amounting to a cunningly executed thriller that will leave half the audience wondering, “Why didn’t they just do that in the first place?”

Article by: Peter Debruge for Variety